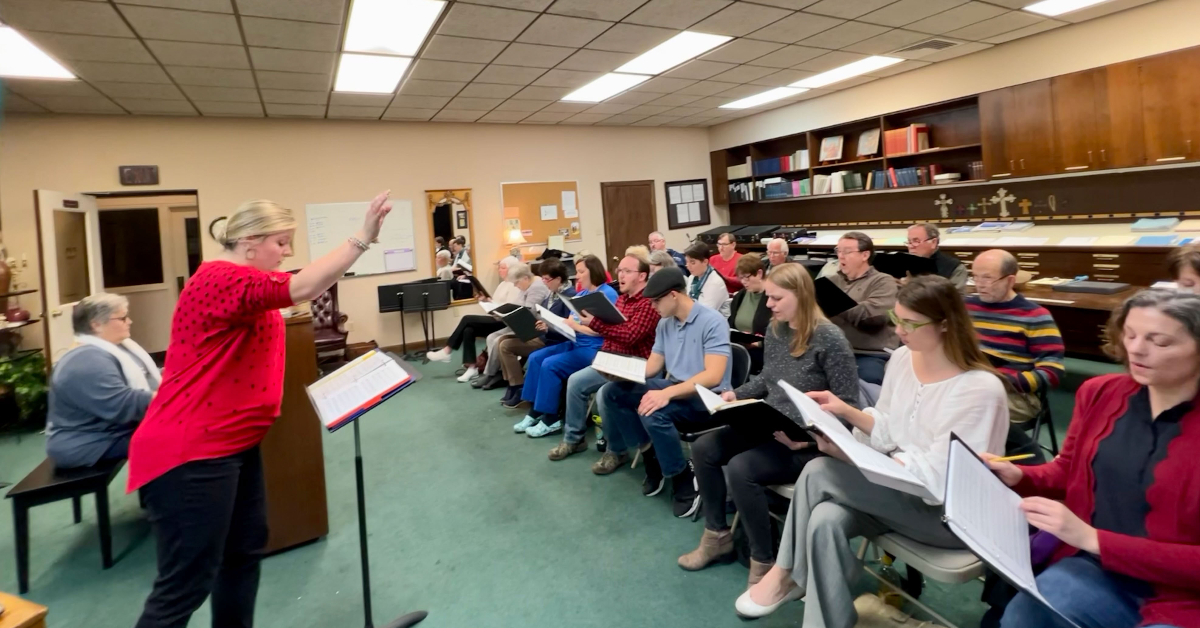 The Vicksburg Chamber Choir, under the direction of Christie Beasley, rehearse for their Christmas concert. The concert will take place on December 6 at the Church of the Holy Trinity. (Photo by Anna Guizerix | The Vicksburg Post)

Traditional and contemporary Christmas carols will fill Holy Trinity Church when the Vicksburg Chamber Choir, under the direction of Christie Beasley, perform their annual holiday concert on December 6 at 7 p.m.

The church is located at 900 South St. The program is free but donations are encouraged.

The title of the concert is “When Stars Shone Down”, based on a contemporary composition of the same name by Steven Aldredge. The piece, which was released in 2020, is a contemporary lullaby for baby Jesus from the perspective of the Heavenly Host.

“We do 10 or 12 songs; some of them are traditional,” said advertising co-president Beth Palmer. “‘When Stars Shone Down’ is pretty new.”

Additionally, the men will sing a Liberian folk song called “African Noel” and the women will sing a piece called “This Endris Night,” a 15th-century English Christmas carol adapted by modern composer Sarah Quartel for a commission from Women of A note, a female choir in Florida, for the group’s 25th anniversary celebration.

“We end with ‘Auld Lang Syne,’ which of course has lyrics and music attributed to Robert Burns,” Palmer said. “We will do that at the end of the concert. We’re going to do this A Capella and we’re going to spread around the church singing this.

According to the German-way.com website, the melody of “Still, still, still” is a traditional folk melody from the Austrian state of Salzburg. The chant first appeared in 1865 in a collection of folk songs by Maria Vinzenz Süß, founder of the Salzburg Museum.

The song’s lyrics, which span four to six verses in German, describe the stillness of the infant Jesus and his mother as the baby is sung to sleep.

According to the website ThoughtCo., Noel Nouvelet is a traditional French Christmas carol that dates from the late 15th century and early 16th century.

The song celebrates all the nativity figures, the handmade nativity scenes found throughout France, where they form part of the celebration of Christmas in homes and town squares and are said to be sung by families at home and at community gatherings.

Steven Aldredge, the composer of “When Stars Shone Down,” is on the music and performance faculty of the School of Fine and Performing Arts at Wright State University in Dayton, Ohio.

He holds bachelor’s and master’s degrees in piano performance from Florida State University. Other choral works include “Night of Tears, Night of Grace”, “Reign”, and “The Lord is My Shepherd (Psalm 23)”.

John Surratt graduated from Louisiana State University with a General Studies degree. He worked as an editor, reporter and photographer for newspapers in Louisiana, Mississippi and Alabama. He has been on staff at the Vicksburg Post since 2011 and covers city government. He and his wife attend St. Paul’s Catholic Church and he is a member of the Port City Kiwanis Club.