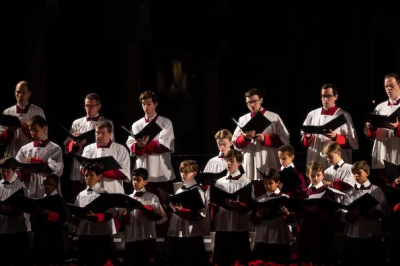 When their busy liturgical schedule permits, the Westminster Cathedral Choir is called upon for concerts around the world.

The Covid-19 pandemic put a temporary halt to this, so it was particularly exciting that the choir was invited to take part in two festivals in Germany in September 2022: the Internationale Musiktage at the Dom zu Speyer, a World Heritage Site of UNESCO, and the IMAD festival in the Paderborner Dom, alongside other international artists, including the British choir Voces 8 and the WDR Rundfunkchor. These were also the choir’s first concerts outside the UK under the new Music Master, Simon Johnson.

The choir performed a musical program centered on William Byrd’s Five-Part Mass, with two contemporary pieces inspired by Byrd’s music: Kyrie after Byrd by Roxanna Panufnik and Ave verum corpus reimagined by Roderick Williams. The concerts also included two pieces composed for the choir itself in 1915: the setting of Nunc dimittis by Gustav Holst and a Salve Regina by Herbert Howells; as well as Charles Villiers Stanford’s Three Latin Motets.

The concerts were attended by large audiences and the choir’s performances were greeted with standing ovations and great acclaim. The German newspaper Die Rheinpfalz praised “its exquisite intonation, clarity, purity and beauty of sound”. Holst’s piece was sung “particularly with phenomenal sound and brilliant, multifaceted luminosity”.

Westminster Cathedral Choir remains the only Catholic cathedral choir in the world to sing Mass and Vespers daily, occupying a unique position at the forefront of English church music. Die Rheinpfalz noted that “it’s not for nothing that the British Isles have long set standards in choral singing – and the Westminster Cathedral Choir gives the tradition its own flavor through its connection to a repertoire Catholic.”

He concluded that “in short: the performance of the English choir under its new musical director Simon Johnson was sensational”.

The Westminster Cathedral Choir Christmas Celebration will take place this year on Tuesday 20 and Wednesday 21 December. Tickets for this annual favorite are now available HERE