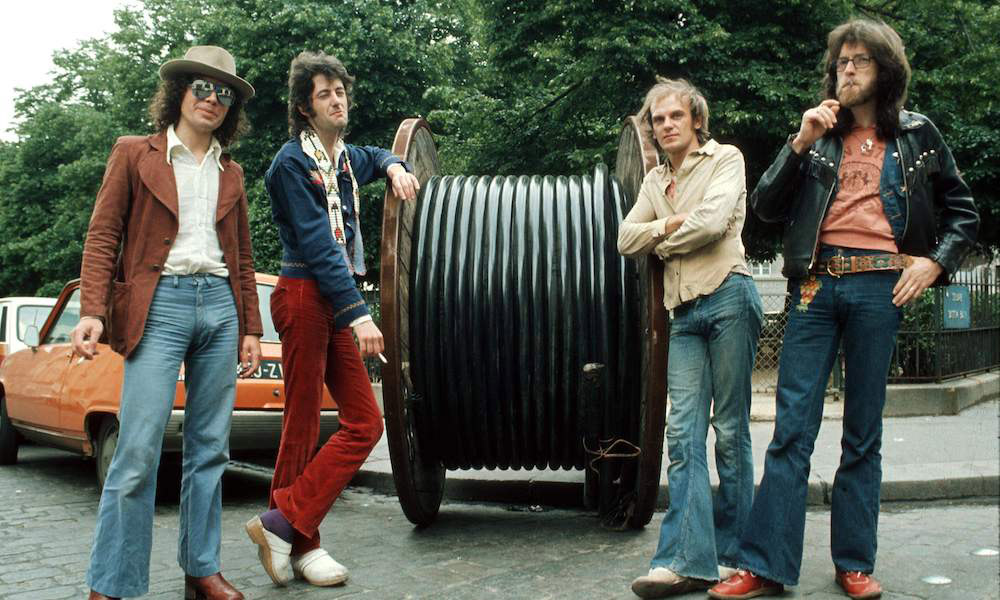 Although the band’s eccentricities have prevented mass appeal, prog fans have always revered Van der Graaf Generator as the equal of more famous peers like Genesis, King Crimson, et al. Even when punk made art-rock unfashionable, Van der Graaf got a pass. Hammill was a recognized and obvious influence on punk ancestor John Lydon and others of his ilk, eventually earning a place in history as something like Peter Gabriel’s Cain of Abel.

The monolithic box set of 20 discs Van der Graaf generator: the years of charisma tells the story of a band that demanded to be different, chronicling the eight albums they released on Charisma Records between 1970 and 1978.

Here is a concise selection of Van Der Graaf Generator’s best songs that highlight both the band’s uncompromising intensity and their wide range of moods and moods.

When they’re working on a good head of steam, nobody does danger like Van der Graaf. Between Hammill’s fire-eater, Hugh Banton’s The Phantom of the Opera organ, and David Jackson’s deployment of the sax as a weapon of mass destruction, they could send Darth Vader running for the hills. “Killer” from their third album, H to the one who am the only one, is a fan favorite that finds Hammill feeling related to a killer shark making its lonely way through the ocean floor. Jackson’s voracious riffs and Banton’s organ explosions send the wild-sounding frontman into one of his most appealing aggro vocal performances.

By 1976, their fury factor had not diminished, as “A Place to Survive” by World record. It starts off deceptively unassuming with a funky, funky intro. But once Hammill leans into the lyrics like a maniacal drill sergeant telling his troops what they need to know to stay north of the ground, things quickly get intense. With its primal attack, it’s one of the band’s simplest songs, but its brutality underscores VDGG’s status as a punk influencer. Imagine if you can the shower scene music from Psycho played by John Foxx-era Ultravox. The result might not venture far from the breathless hypertension of “Cat’s Eye/Yellow Fever (Running)” by The Quiet Zone/The Dome of Pleasure.

The VDGG lineup that toured in 1978 without Banton but no more fiddler Graham Smith was fearsome and aggressive enough to give punks a hard time. As documented on the live album Vital“Sci-Finance” (recorded for a Hammill solo album a decade later) is a bust of unscrupulous businessmen that sounds more like a precursor to the post-punk mayhem of The Birthday Party than anything that is linked to the program.

It’s probably the most slamming song to ever use the word “debenture”. From its lyrics “Smash the system with the song” to its primal, relentless roar, “Nadir’s Big Chance” from Hammill’s 1975 solo album of the same name, is a blatant punk precursor. But the Vital The version takes it a step further, cunningly updating the lyrics to scorch the punks following the camp in “leather bondage suits.”

A Plague of Lighthouse Keepers, After the Deluge, Muerglys III)

You know it’s prog when the 11½-minute track that opens the album (“Lemmings,” which we’ll get to later) isn’t epic. A sort of psychodynamic operetta, “A Plague of Lighthouse Keepers” is a 23-minute, 10-part suite that took up the entirety of the second side of its original LP. This piece from 1971 pawn hearts there’s so much going on that even the appearance of Robert Fripp on guitar might go unnoticed, but somehow it never seems crowded. The band took tape manipulation, overdubbing and electronic alchemy to the next level to help spin the story of a lighthouse keeper losing his grip, with music that matches his mental dislocation step by step. .

Since 1969 The Aerosol Gray Machine was really a Peter Hammill solo album in disguise, The least we can do is greet each other is generally considered VDGG’s first “real” album. They wasted no time lighting an 11½-minute barn burner in “After the Flood.” Carried by the sound of Banton’s church organ on steroids, Hammill unveils a portrait of the nuclear apocalypse so detailed it sounds more like news report than prophecy, citing Einstein’s warning about dangers of escalating arms race for good measure.

Who or what is “Muerglys III?” Hammill is nothing if not gleefully inscrutable, but the name appears to be a nickname for his guitar in this tale of an insane musician’s woes. The 20-minute track from 1976 World record is one of the most complex and exciting of the group. It opens with a kind of avant-garde chamber music section and runs through a gauntlet of unexpected twists. Just to show that one can never predict Van der Graaf’s path, it improbably ends with an extended reggae jam evoking pink floyd get high with The Wailers.

House with no door, refugees, Mike and Susie, the undercover man, your time starts now

Van der Graaf Generator’s best songs have always displayed more drastic mood swings than a double-booked catering hall for a bachelor party and wake. You couldn’t ask for better evidence than the aforementioned “Killer” turning into “House With No Door” on H to the one who am the only one. For the first few minutes, the latter could be a Elton John song, while Peter Hammill’s solemn piano sets the tone for a sober and melancholic melody where the title metaphor symbolizes loneliness and isolation. When David Jackson’s poignant flute line enters after Hammill mutters, “Won’t somebody help me,” it makes for one of the finest moments in the VDGG catalog.

Jackson’s flute figures powerfully in the Pachelbel-with-denim vibe of the “refugees” of The least we can do, mingling with the cello to give a baroque-pop frame to Hammill’s delicate falsetto. Even the topic is warmer and fuzzier than VDGG fans are used to, with Hammill gushing over his former roommates “Mike and Susie”, the former being Susan Penhaligon, who eventually rose to fame as a television and film actor.

The soft side of the group had actually been in place since their embryonic phase, as evidenced by “Afterwards” by The Aerosol Gray Machine, a sweet, organ-driven idyll that begins as a hymn to flower power until the other shoe finally drops. 1975’s “The Undercover Man” godbluff starts out measured and majestic, the music threatening to get rowdy as the lyrical sentiment darkens, but things reach a surprisingly salvageable state by the end, as the track takes an almost sanctified turn.

In Van der Graaf’s later years, they gained even more seriousness when they leaned into a semi-anthemal mood. However clear its outlook, 2011’s “Your Time Starts Now” An anchor in the numbers is decidedly inspiring, and Banton’s organ is inches from ecclesiastical territory.

Theme One, The Emperor in his war room, Whatever Robert would have said, When she comes

As sui generis as these black sheep are, at the end of the day, they’re still a progressive rock band. Their greatest contact with the mainstream was one of their most progressive moments. The classic rock instrumental “Theme One”, a single appended to later pressings of pawn hearts, is in fact a cover of a composition by George Martin. It even usurped the original’s place as BBC radio’s closing night theme, with the band’s version receiving praise from the composer to boot.

The two parts “Emperor in His War Room” of H to He is sinister enough to stand alongside Van Der Graaf Generator’s darker songs, but its radically shifting dynamics and a Robert Fripp guitar stab put it firmly on the prog side of the balance sheet. “What would Robert have said?” of The least we can do apparently refers to the device invented by Robert Van de Graaff that inspired the band’s name. Its eventual applications in nuclear technology are at the heart of a cautionary tale full of drastic changes in weather and mood, making it a piece of prog as chilling as it is empowering.

“When She Comes” from World record gives the “evil woman” rock trope an intellectual twist by casually adding references to Keats’ classic poem The beautiful lady without mercy and British Pre-Raphaelite painter Edward Burne-Jones, while Hugh Banton explodes in flurries of orchestral keyboards.

Lemmings, Pioneers on C, The Door)

Even according to VDGG standards, pawn hearts“Lemmings” is just completely crackers, in the most deliciously dark way. Just opening your album with a 12-minute track called “Lemmings” was extraordinary enough on its own in 1971. Occupying it with lines like “young minds and bodies on impaled steel rays” and “monsters with iron throats force our cries” while going from apocalyptic fury to distorted whispers goes even further.

“Pioneers on C” from H to He is the sound of four young British gentlemen trying to throw you off balance. The band swings wildly from brooding atmospheres to feel-in-your-face, pastoral folk-rock strumming, a bit of unaccompanied avant-garde sax naughtiness, and a nightmarish descent into darkness, all throughout 13 minutes.

Hammill calling a song “a bit strange” is tantamount to Wes Craven declaring something a bit creepy, so catch his intro to “The Door” on Vital for what it’s worth. The band hammers a barbed wire riff into submission with increasing speed and ferocity as the vocalist scorches the air around him, for effect not far from Captain Beefheart and the Magic Band defend a doctorate. thesis.

Think we missed one of Van Der Graaf Generator’s best songs? Let us know in the comments section below.

For the latest music news and exclusive features, check out uDiscover music.