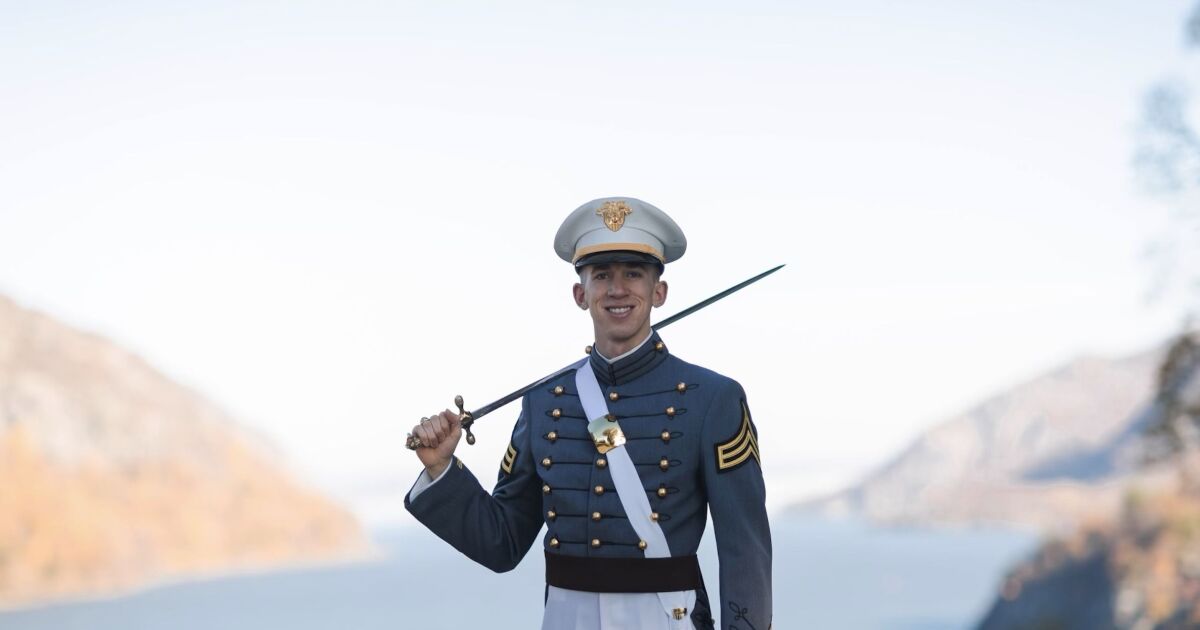 The West Point Glee Club, “one of the U.S. Military Academy’s most visible cadet organizations,” will join the voices of the Tabernacle Choir in Temple Square in a patriotic-themed Veterans Day edition of ” Music & the Spoken Word” this weekend.

The “Music & the Spoken Word” broadcast will originate from the Salt Lake Tabernacle in Temple Square on Sunday at 9:30 a.m. No ticket is required.

The event will be a special return for Cadet Lt. Alma Redd, a native of Farmington, Utah, and a former missionary for The Church of Jesus Christ of Latter-day Saints.

It is a tradition each year for the West Point Glee Club to travel and perform in the hometown of the caddy in charge, who essentially serves as club president.

This year it’s Redd. His family has a connection to the Tabernacle Choir because his mother, Karen Redd, is a former member.

Redd, who said he is named after the Book of Mormon prophet Alma, was born and raised in Farmington. He attended Viewmont High School and American Heritage School in American Fork before serving a mission in Everett, Washington.

Redd comes from a family with a military heritage. He is the youngest of seven sons who all served in the armed forces, along with his father and grandfather. He entered the United States Military Academy at West Point in 2019 and joined the Glee Club at the request of a fellow cadet who is also a family member.

“Music has always been a part of my life,” said Redd, who sings second tenor. “I like to sing. I like extracurricular activities. So I gave it a try and I’ve been there for four years now. It’s a good musical group, and it’s a lot of fun.

The 45-member choir is one of the military academy’s largest outreach programs. The West Point Glee Club performs annually at events across the country, ranging from halftime shows at major venues to banquets at West Point.

Redd was with the band when they performed overlooking the Grand Canyon during their centennial celebration in 2019. They recently performed at a Brooklyn Nets basketball game. The West Point Glee Club will soon perform at the Army-Navy football game.

Redd’s favorite musical number has always been the national anthem of the United States.

“It’s simple and direct, but also deep and powerful,” he said. “I have great respect for this song and what it represents in that we as members of the military can stand up and represent our nation in this way. It’s quite meaningful to me.

The West Point Glee Club will feature some of their other favorites on Sunday at the Tabernacle. The group will sing “Mansions of the Lord” (from the movie “We Were Soldiers”) and “Battle Hymn of the Republic” with the Tabernacle Choir. They will also perform a tapping arrangement with the words “God is near,” Redd said.

“We are very excited,” he said.

While in Utah, the West Point Glee Club will also perform a closed-door performance for veterans on Friday morning, Nov. 11 at the VA Hospital in Salt Lake City.

Sunday’s joint performance will renew the relationship between the Tabernacle Choir and the United States Military Academy. The Tabernacle Choir traveled to New York to perform with the West Point Band as part of their Atlantic Coast Tour on July 4, 2015.

“It’s an opportunity to continue that relationship,” said Redd, who will graduate in May and be commissioned as a second lieutenant in the Army. “It’s pretty cool to be a part of that.”