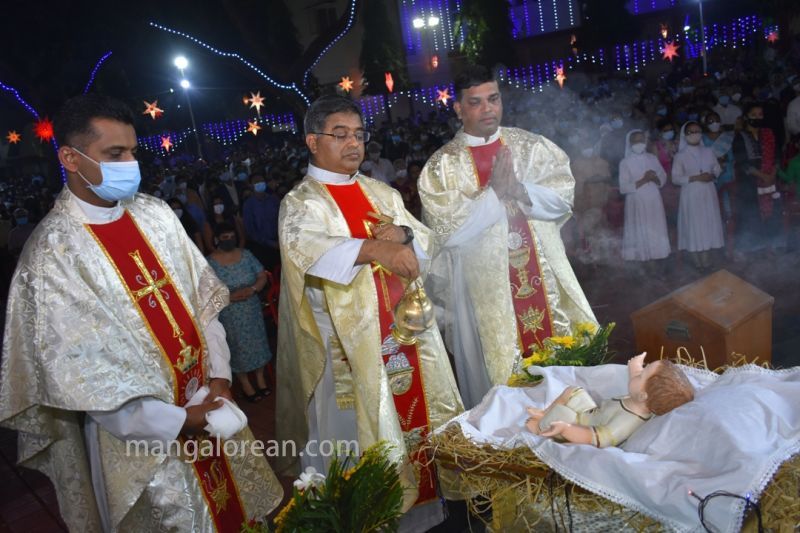 Mangaluru: If for the first time ‘ONE VOICE YOUTH CHOIR’ under the direction of Elton Martin Serrao rejoiced in the resurrection of Christ with a RAP song sung by the team of 29 members during the EASTER EVE Mass on April 3, 2021, but this time the choir led by Martin and Ms. Karen Tellis, as the conductor, rocked the Christmas Eve outdoor mass on December 24, 2021 at Fatima Retreat House with thunderous Christmas carols. and thrilling with a touch of ROCK. While young people and adults alike enjoyed the rocking chants, but unfortunately the seniors had to put up with the music making their hearts beat, without a doubt it was ROCKIN ‘CHRISTMAS EVE MASS which was a treat for the big devotees faithful gathered for Christmas Eve Mass.

Christmas Eve is the evening or the entire day before Christmas Day, the feast commemorating the birth of Jesus. Christmas Day is observed all over the world and Christmas Eve is widely regarded as a full or partial holiday in anticipation of Christmas Day. Together, the two days are considered one of the most culturally significant celebrations in Christendom. Since tradition has it that Jesus was born at night (based on Luke 2: 6-8), midnight mass is celebrated on Christmas Eve, traditionally at midnight, in commemoration of his birth. The idea of ​​Jesus’ birth at night is reflected in the fact that Christmas Eve is called Heilige Nacht (Holy Night) in German, Nochebuena (Good Night) in Spanish and similarly in other expressions of spirituality. Christmas, like the song “Silent Night, Sacred Night”.

The Christmas Eve ceremony, which takes place in churches around the world, celebrates the birth of Christ, which is said to have taken place at night. In recent years, some churches have scheduled their “midnight” mass from 7 to 7:30 p.m. And locally here in “Rome of the East”, known as Mangaluru, a Christmas Eve Mass was celebrated with fervor and mirth, in the presence of a sea of ​​faithful gathered in the premises in outdoor at Fatima Retreat House, Valencia, Mangaluru on Thursday December 24 at 7:30 p.m. From 7 p.m. to 7:30 p.m., the choir sang beautiful Christmas carols, with a touch of rock air.

Immediately before the penitential rite, the ministers went to the manger, the main celebrant, Father Melwin Pinto Sj, said a small prayer and blessed her, and kissed the Baby Jesus, then he surrendered at the altar and Mass continued. Father Melwin Pinto SJ in his homily recounted the meaning of Christmas and asked the faithful to give generously to the needy because Christmas is a feast of sharing and giving. He added, “God is our help and support. Our hearts are made for God. In the Bible, the chapter John 3:16 says: “For God so loved the world that he gave his only begotten Son, that whoever believes in him should not perish but have everlasting life.” Therefore, whoever believes in God will have eternal life. life”.

“We have to recognize Jesus, we have to develop a conscience to seek Jesus. We must accept the power of love and learn to be vulnerable and weaker. We have to smile through the pain, and also look for vulnerable neighbors, and when we eat a sumptuous lunch or dinner, we have to think of the poor and the hungry. We must receive God in our hearts. A gift should be a surprise, and a gift is never taken away. Pope Francis said that God always surprises people with the way he works, and for this reason believers should be open to the Lord’s way of thinking and acting, rather than expecting him to conforms to their aspirations. Today, the Lord invites us to adopt an attitude of humble listening and docile expectation because the grace of God often presents itself to us in a surprising way, which does not correspond to our expectations. We must also give gifts to those who hate us or are our enemies, ”added Father Melwin Pinto SJ.

Thanking everyone, FRH Director Father Maxim Misquith SJ said, “I wish you the joy and peace of Christmas and the New Year 2022 filled with the best blessings from God. Let us stand in the light of Christ – where Love overcomes hatred; Truth overcomes deception and hope overcomes despair ”. Hallelujah, hallelujah. Today is the good news of great joy: today a Savior is born to us, Christ the Lord. Hallelujah, hallelujah.