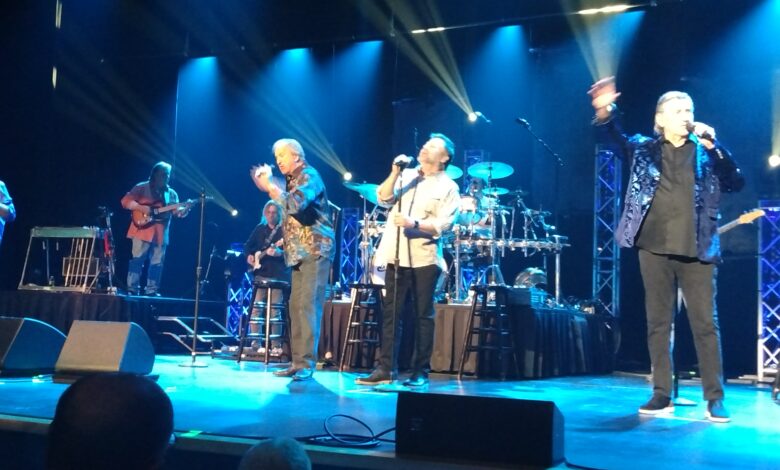 The Oak Ridge Boys and The Mighty Oaks Band brought a surprisingly heavy country rock sound with their usual wavy, bright harmonies to Hempstead Hall on Friday night, playing 22 songs that included their greatest hits and three cuts from their latest album.

William Lee Golden was not on stage that night. After the first issue, a rousing performance of “Everyday”, Joe Bonsall spoke about Golden’s absence.

“First of all, let me tell you, he’s fine. He is doing very well. He’s fine today. We spoke to him before the show and he sends his love,” Bonsall said, explaining that Golden was told by his doctors earlier in the week that he needed to have a medical procedure and chose to go ahead. and to have it on Friday.

Bonsall then introduced gospel singer and producer Michael Sykes, who would replace Golden. Sykes is a multiple Dove Award winning and Grammy nominated vocalist, instrumentalist, vocalist and producer. “No one knows harmonious singing better than Michael,” Bonsall continued. “He’s even co-produced and produced a handful of albums about us over the years. So no one knows us better than Michael. So we’re ready to sing for you, good people, if that’s okay with you.

As the cheers of the nearly sold-out crowd in the 1,600-seat venue attested, all was well. The Oak Ridge Boys then launched into a propulsive set in which the fastest, most danceable songs dominated.

At Richard Sterban’s first bass solo in “American Made,” the crowd roared. “Fancy Free” was slowed down a bit from the recording, allowing Duane Allen to infuse his solos with more desperate pathos. Bonsall then informed the audience that it was Allen’s birthday to general cheers and applause.

“Dream On” was remarkable, the harmonies and instrumentation seeming to expand the space of the theater and Sterban’s solo being particularly rich. “Come On In” featured a group vocal break that showed the band could still harmonize as well as the Beach Boys or the Eagles.

The Mighty Oaks band brought out a pleasant Byrds-like jangliness on “Beautiful You,” with lead guitarist Darin Favorite inspiring woos and wondering whistles through several choruses.

Another hallmark of Sterban was “Mama’s Table”, its elegiac lyrics befitting the older demographic and providing a tour de force for Sterban.

Bonsall’s tenor voice was challenged on the verses of “A Little Love Song,” but rocked the honky-tonk song effortlessly. The playful harmony break sent the song flying, and Ronnie Fairchild’s electric piano provided a playful watermark that earned him applause.

It was after this number that Bonsall asked attendees at Hempstead Hall to call the Hogs. “That’s what we came for,” he said after the call ended.

Bonsall introduced the band members, including multi-instrumentalist Rex Wiseman who Bonsall said had just recovered from pneumonia and had now joined the tour.

What followed was a trio of heartfelt gospel songs, “Amazing Grace,” “A Little Talk with Jesus” and “They Baptized Jessie Taylor,” a song written by Dallas Frazier, who also penned the colossal Oak Ridge Boys hit. in 1981 “Elvira. Frazier, Bonsall noted, had died just over a month ago. The song about Jessie Taylor, Bonsall said, was based on Frazier’s own religious conversion. Ahead of their Gospel sequel, Bonsall said, “The way the world is now, a little bit of Jesus won’t hurt anything.”

Songs from the 2021 album “Front Porch Singing” came next. The album, Bonsall said, was made up of songs meant to help lift spirits over the past two years of the pandemic. “Life is Beautiful”, “Swing Low Chariot” and “Love, Light and Healing” indeed seemed to do for the Hempstead Hall crowd what they were meant to do.

The high-energy songs and bestsellers “Elvira” and “Bobby Sue” featured inventive, coiled guitar bursts from Favorite along with invigorating vocals from The Boys.

The show, which ran for 90 minutes, was a compelling testament that the Oak Ridge Boys are still vital and still have a lot of music to make. The next performance on their Front Porch tour is tonight in Tulsa.