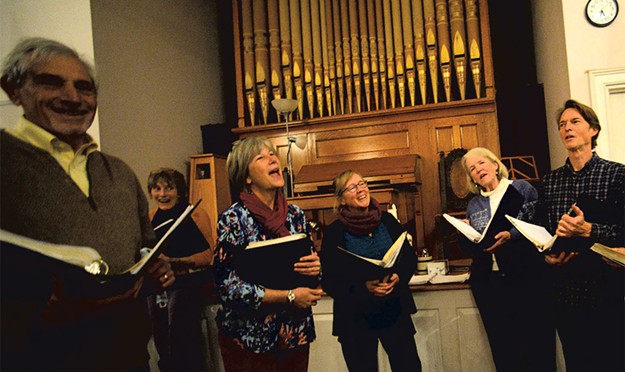 On a brisk October morning, nine members of the Hallowell Hospice Choir gathered outside Valley Cares, a small rural nursing home in Townshend. The singers, of upper middle age, wore sweaters, fleece vests and sturdy shoes and chatted with the casual ease of people who have known each other for a long time. At the appointed time, they entered, quietly settled in a sunny alcove and sang a song: “Blessed Quietness”, “Amazing Grace” and “I’ll Fly Away”, in a rich four-part harmony. Their listeners were a dozen nursing home residents gathered for a short memorial service for three other residents who had recently passed away.

Afterwards, Kathy Leo, who founded Hallowell almost 20 years ago, remarked, “It was lovely, but it was different from the intimate experience of a bedside singing.”

The Hallowell Singers are affiliated with the Brattleboro Area Hospice, which provides free non-medical services to terminally ill patients and their families in southeastern Vermont. Singers usually visit a dying person in their home or hospital room to sing a few songs, then slip out the door.

“What we do is practice, not performance or ministry,” Leo said. “At the heart of it is learning to accept and be present with whatever is in front of us.”

Hallowell has around 40 members – all of whom receive specialist training from hospice staff – but they sing in groups of four to eight. When the families of hospital patients ask for a visit, or when Leo offers one, the singers gather outside a house or hospital room and enter as quietly as possible.

“Sometimes we hum to get in,” Leo said. Singers do not introduce themselves and do small talk unless the patient initiates it.

“There is no format, no predetermined way for this to happen,” Leo said. “We always read the play. It all depends on where the person is in their journey and where the family is in their process of grieving and letting go.”

Bedside singing is a centuries-old tradition around the world, practiced by the Benedictine monks of medieval Europe and members of Native American tribes. It is also not uncommon for contemporary religious groups to sing or recite prayers during a person’s final days.

But the Hallowell singers were secular, and therefore unusual, when they began about 20 years ago, around the same time, a network of “threshold choirs” – similar a cappella ensembles that sing for the dying – took root in California. Soon Leo was conducting workshops throughout New England for other fledgling hospice choirs; there are now several throughout Vermont. In 2016, she published On the breath of song: the practice of bedside singing for the dying.

In the book, Leo tells the story of Oona Madden, whose mother, Bridget, was 83 and died of lung cancer in 2011. Bridget had undergone surgery and radiation therapy, but her family eventually waived further medical procedures “because the procedures were just awful,” Madden said in an interview with Seven days. “My mother was miserable. It was a really tense, trying and sad time.”

Madden’s daughter-in-law at the time knew Hallowell and one Saturday morning Madden called. Later that day, a group of singers quietly entered the hospital room where family members had been meeting for weeks. “My mum is Irish, and they sang her an Irish song, which made her smile a bit. You could tell she was listening,” Madden recalled.

Those few moments were a turning point for Bridget.

“She made eye contact with all of us, closed her eyes and never opened them again,” Madden said. “I think the singing gave her permission. She stopped thrashing and fighting and became peaceful. It was like they were singing her through.”

This sense of peace and comfort prompted Leo to found Hallowell in 2003. She had started volunteering at Brattleboro Area Hospice the previous year, and her first patient was Dinah Breunig, whose breast cancer had metastasized to his whole body.

For months, Leo had been visiting Dinah at home, cooking soup and cookies, hanging out, whatever the family needed. One evening, a group of Dinah’s friends from the Guilford Community Church choir came to sing for her; another group arrived a few nights later. Leo, who had been singing in choirs and choirs since he was a teenager, joined them as they sang “By the Waters of Babylon”, “Angels Hovering Round” and other songs.

Fred Breunig, Dinah’s husband, recalled that although Dinah had stopped speaking, he could see her mouth moving. When he bent over her, he heard her singing.

“It was quite moving to see how much the music brought out in her,” he said. Dinah died a few days after the singing. Fred was to become a founding member of Hallowell.

Leo and the hospice administrators agreed: the experience of being sung should be available to any hospice patient who wants it.

Susan Parris, executive director of Brattleboro Area Hospice for nearly 27 years, said it reminded her of how she used to sing for her daughter as a child.

“It’s the most comforting and loving experience,” Parris said. When you’re terminally ill, she continued, “you withdraw from the world. But singing creates an intimacy and connection, which can often be lacking when you die.”

The connection often serves the singers as well as the dying. Peter Amidon, the Guilford Community Church choir director who led Dinah Breunig’s home visit, said: “I didn’t know any other way to say goodbye to a friend who was dying. Singing with Dinah, and for her, seemed like a wonderful way to do that.”

Amidon, a choral composer and educator, is one of Hallowell’s musical directors, along with Mary Cay Brass, who directs several vocal ensembles in southern Vermont and western Massachusetts. To form Hallowell, they brought in volunteer singers and songs from their respective bands. Over the years, Hallowell’s repertoire has ranged from secular to spiritual – although its members adhere to no particular religion – and from optimistic to slow and soothing. It includes songs from American gospel and Appalachian traditions, melodic chants from Eastern Europe and Africa, standards such as “Swing Down, Sweet Chariot” and “You Are My Sunshine”, and hymns such as “I Will Guide Thee”.

“There was no ‘genre’ of songs for bedside singing when we started,” Brass said. “We’ve taken songs we like that seem suitable for this purpose and also song suggestions from the families we’ve sung for.”

Among the singers’ favorites are songs in languages ​​other than English. Brass said, “When you’re not trying to catch the lyrics to a song, you just feel the music. It’s very calming.”

It can also be incredibly sad.

“Singing creates an energy that allows people to let their grief shine through,” Leo said. Madden recalled that when the Hallowell singers visited her mother in the hospital, “even the nurses had tears in their eyes,” she said. “I don’t know if it’s the lyrics of the song or the community of the song or what exactly it is that creates this sense of peace, but something does.”

“Music turns people off,” said Connie Woodberry, who has been with Hallowell since its inception. For family members listening, “you don’t think about the logistics and all the things you have to do next. It’s a time for people to relax, to get into their hearts.”

It’s a physical moment as well as an emotional one, according to Leo. Listeners can feel the vibrations of the singing voices and “the breath and energy of a person whose body is working towards departure”.

During the pandemic, Hallowell managed a few outdoor chants, standing in front of bedroom windows, but most of its members had no choice but to take a break. The calls started coming in again this fall, and Leo hopes there will soon be more visits like the one with Jeff Shields in 2014, eight days before he died.

Shields, the former president and dean of Vermont Law School, was nearing the end of a long and grueling battle with mantle cell lymphoma when Hallowell singers came to his home in Guilford. His wife, Genie, observed that singing “was the epitome of what Jeff was doing: spending his time with people he loved and doing things that mattered to him, instead of looking for the perfect vaccine or medicine or the pill or the doctor to help. let him leave his illness.”

Genie recorded a brief video for the song. Inside, Jeff sits up in bed, smiling, with his daughter next to him, holding her hand. Several of their grandchildren are in the room, as well as the family dog, a friend and seven singers who harmonize on “I Still Have Joy”.

“I don’t cry a lot when I look back on our life,” she said. “But this movie is very emotional. There was something so intimate and loving about it. It was like we were given a beautiful, peaceful gift.”