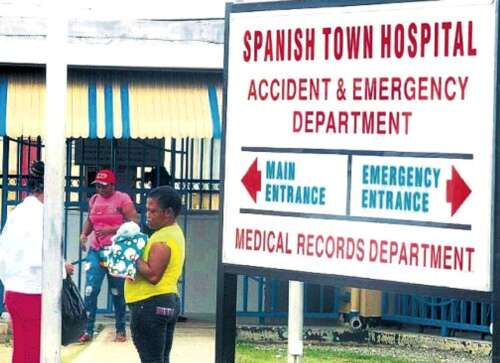 ST CATHERINE, Jamaica – Spanish Town Hospital, the largest Type B public health facility in Jamaica, which is celebrating 70 years of service to St Catherine’s Parish, hosted a week of activities to mark the milestone.

The official week of celebrations began with a memorial service at the Family of God Seventh-day Adventist Church in Spanish Town on June 18 – the anniversary of the establishment of the institution.

In a statement, the hospital’s Chief Medical Officer (SMO), Dr Jacqueline Wright-James, said it was a great experience to be received by the congregation to celebrate “the incredible achievement and milestone exciting”.

“We took this opportunity, as a group from the hospital, to seek divine guidance and re-engage, re-engage and recharge for the journey ahead,” the SMO said.

The sermon was delivered by the president of the Northern Caribbean University (NCU), Professor Lincoln Edwards, who addressed a charge to the staff.

The SMO said the week of celebrations went beyond marking the hospital’s history as an iconic St. Catherine’s institution to recognizing the hardworking, dedicated and committed team of healthcare heroes, past and present.

These, she noted, include “nurses, doctors, paramedics, maintenance staff, security guards – all categories of personnel, as human resources are mission critical to the hospital”.

A special staff recognition ceremony was held during the week, and the team was also treated to a concert titled “Music in the Garden” on Wednesday, June 22 with performances by Mr. G, Wickerman, The Band Jamaica Defense Force (JDF) pop and others.

Dr. Wright-James noted that the past three years may have been the most tumultuous in the institution’s history due to the coronavirus pandemic.

“The volume of care was significantly higher than what we are used to, but because we have a dedicated team at the hospital, who really got involved and invested in the task, we are able to manage all of our patients. ,” she says.

The week of activities ended on Friday, June 24 with a celebration for the hospital and staff whose birthdays fall between the months of April and June.

Spanish Town Hospital provides 21 services to the residents of the second most populous parish, numbering approximately 520,000.

The secondary health facility receives approximately 90,000 patients per year, including inpatients and outpatients.