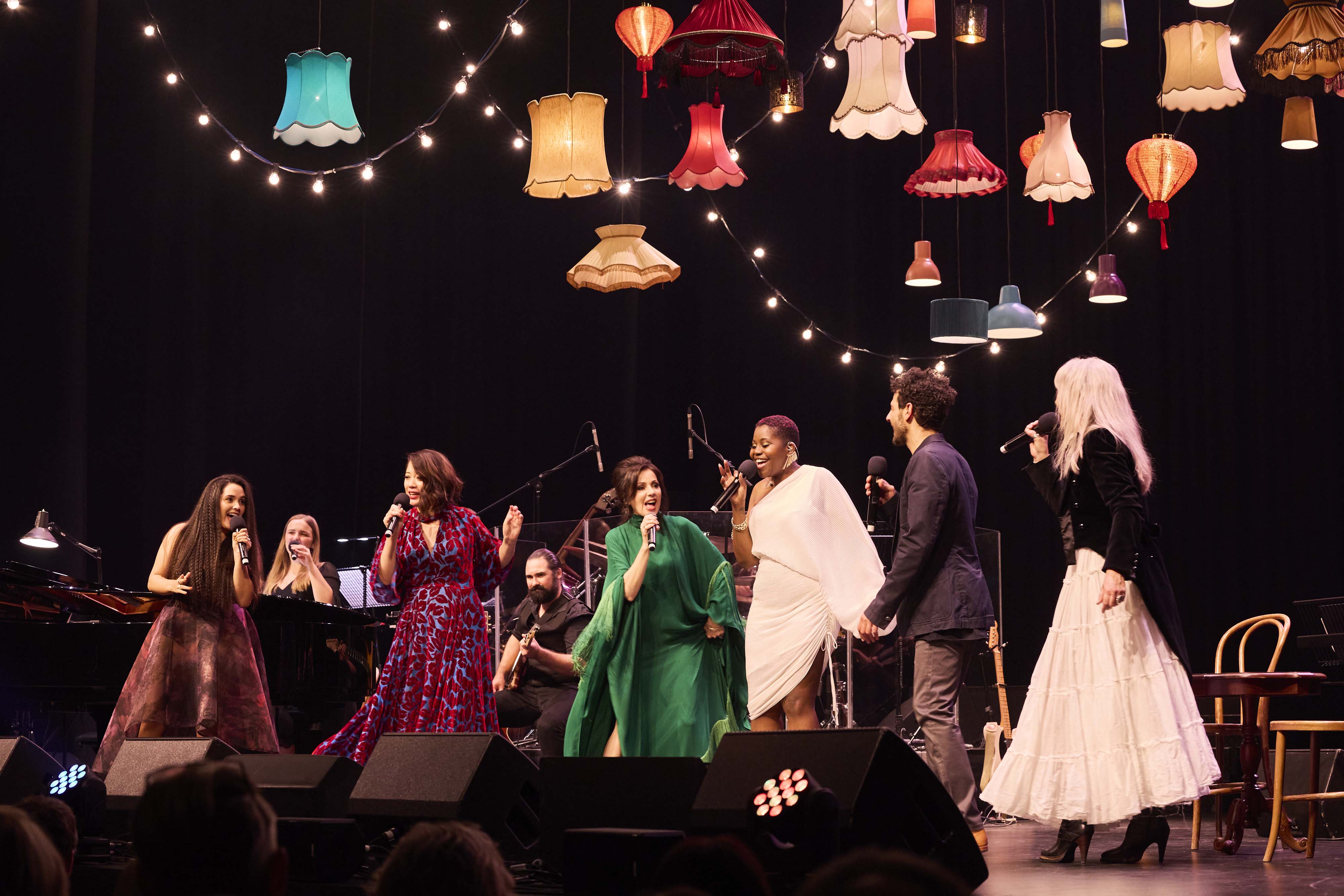 How to describe the stage presence of Tina Arena?

The Cabaret Festival’s artistic director isn’t always on stage for this two-hour celebration of music’s role in the personal stories of some of Australia’s most distinctive artists. But her spirit is there: she is authoritative, as a serious interpreter should be; but she also knows how to have fun.

And that’s what happened in this often extraordinary evening at the cabaret.

In two hours, Arena transports us to her family’s veranda in Moonee Ponds, rocking with her mother and sisters to the melodramatic 80s ballad, Maledetta primavera (Cursed Spring), while fellow performers give us a dazzling tour encompassing Chinese rock ‘n’ roll and Zimbabwean lullaby, Torres Strait gospel singing and Yom Kippur prayers, Scottish folksong, some Destiny’s Child and one of the biggest versions of an Arena hit you’re likely to hear.

Under the direction of Johanna Allen, Her Majesty’s stage is adorned with fairy lights and a set of lampshades. Arena welcomes audiences into the singers’ house – a slow (and very unexpected) take on Madness’ 80s hit Our house introduces the concept.

On stage with Arena are Australian singers from various cultural backgrounds: Sophie Koh, of Chinese-Malaysian origin, Lior of Israeli origin, French-Canadian Wendy Matthews, Jess Hitchcock, whose family is from Saibai in the Torres Strait, and Zimbabwe-born, Zimbabwe-based Melbourne Thando.

After Arena begins with the magnificent swing of MaledettaKoh burst onto the stage with a celebration of Chinese rock ‘n’ roll, the 1950s number Wo Yao Ni De Ai, before sitting down at the piano for one of his own pieces, “Yellow Rose”, dedicated to unknown Chinese poets.

Thando, a powerful soul singer, kicks off the evening with her favorite song as a nine-year-old, “Survivor” by Destiny’s Child, before stunning the audience with a haunting lullaby, Tula, Tulaonce sung by her mother, which she now sings to her daughter.

At this point, it was clear that this was a unique performance – a chance to cross cultures and styles in a way that was likely to be unique. Vocalists performing pieces of great personal significance played a significant role in the strength of the delivery.

The family theme extended to local musicians on stage. As well as a string quartet, a band led by Mark Ferguson from Adelaide on piano also included his family – the mother-daughter duo of Sue and Ciara Ferguson were a joy to watch and listen to.

Lior’s turn: an incredibly cute rendition of his favorite song from his favorite kids’ album when he was a young kid in Tel Aviv; then an unadorned Yom Kippur prayer for compassion, with the singer lighting up a two-cent piece to transform the cabaret stage into sacred space, from bouncy ditty to soaring invocation.

A similar turn came next from Jess Hitchcock, who will surely soon attract more attention for her effortlessly powerful and rich voice. After a nod to her mother’s love of ’50s and ’60s rock with “Stupid Cupid,” she was joined by Sue and Ciara to raise the roof with a powerful gospel rendition of a Detroit anthem. of Torres, Baba Waiyar.

Wendy Matthews told stories of her early life in Canada, beginning with Joni Mitchell’s Cherokee Louise (“I Lived Inside Her Emotions…”), then her own hit “Standing Strong”, her voice distinctive perfect for a cabaret setting.

After the intermission, a highlight took place: Arena and Hitchcock duet on Arena’s hit “Sorrento Moon (I Remember)”, with a new nostalgic glow with a slower tempo. Wonderful.

From summers of old in the Victorian seaside town, we are back on the streets of Tel Aviv – that terrible day in November 1995 when Israeli Prime Minister Yitzchak Rabin was assassinated, with all its terrible meanings for peace in this country . Prior to the murder, a crowd of 100,000 sang a prayer for peace – Shir L’Shalom – which Lior carried onto the stage with his booming tenor voice.

And so the night continued in this emotional vein. There were two highlights from here: Wendy Matthews singing her heartbreaking 1992 hit “The Day You Went Away,” mostly in French, leaning against the grand piano, her timbre of whiskey and cigarettes taking us into a late-night reverie.

And then Arena, commanding the stage, delivered a searing version of “Caruso”, the story of the painful memories of a man on the verge of death in that other Sorrento, in his Italian homeland.

A perfect ending was delivered with each singer contributing in their own language to Lior’s favorite wedding song, “This Old Love”, followed by a singing and dancing Italian wedding style with Tinarella Di Luna.

It was a brilliant concept and, perhaps, the crowning achievement of Arena’s oversight of this year’s Cabaret Festival.

See all of InReview’s coverage of the 2022 Cabaret Festival here.

Increase your impact by doubling your donations

When you pledge to make a regular weekly, bi-weekly or monthly tax-deductible donation to InReview, each scheduled donation will be matched by Creative Partnerships Australia. That means you’re supporting twice as many InReview stories to order, edit, and publish.