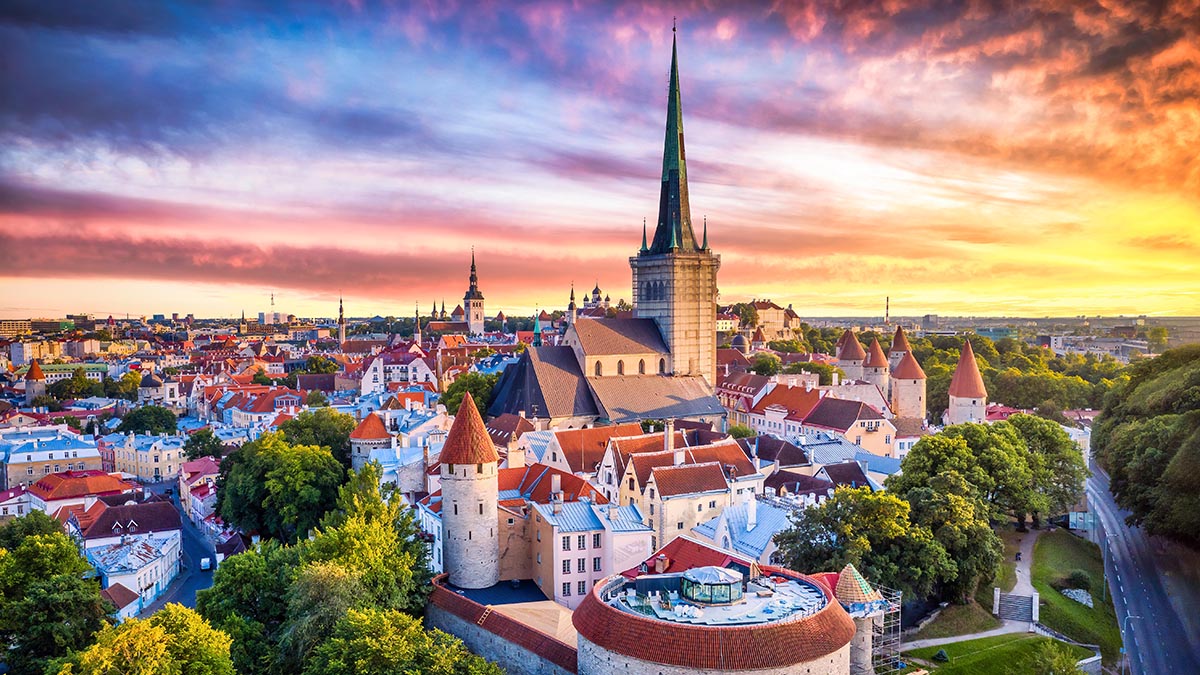 A great mix of heritage and modernity, Estonia’s capital welcomes you with a groundbreaking love for songs, lip-smacking food and a quirky sense of people’s humor

A view of the old town of Tallinn at sunset; (Photo: Getty Images)

By Ranjita Biswas: On a beautiful sunny day as I took the ‘boat’ – actually a huge boat named ‘Viking Express’ that shuttles between Helsinki and Tallinn, the Estonian capital – I wasn’t sure what to expect. It was a weekend and the boat was packed with weekend visitors from Helsinki and shoppers (“It’s cheaper to buy there,” someone said). I was lucky enough to be assigned an upper deck cabin for the trip – it takes just over two hours – and to have access to a huge buffet served in the restaurant. While walking around to get an amazing view of the blue Baltic Sea, in another enclave, I found a loud group drinking beer and a few couples dancing on the floor. But I still didn’t know what to expect when I landed. After all, Estonia has only recently entered the tourism map, at least in this part of the globe. Escaping from Soviet domination after perestroika is not that far off either. Estonia had remained a known unknown.

It was therefore a pleasant surprise to discover a place rich in history. Today’s Tallinn combines its heritage and modernism with equal ease. By the way, Estonia is the birthplace of Skype. I noticed a certain kind of grace in the movement, a kind of rhythm in the women walking around. “Oh, it’s because we’re still singing,” said our pretty guide Margit Raud. Was she pulling our leg? She explained to assuage any such thoughts. “We like to sing. The very essence of protest against foreign rule in Estonia is rooted in the Estonian Song Festival. It dates back to 1869 when composer Johann Voldemar Jannsen composed his famous My Fatherland, My Happiness and Joy which became Estonia’s national anthem. The country at that time was under Russian rule. Estonians gathered every five years at Lauluväljak, the famous song festival, and defiantly sang this national song. After a brief period of freedom, Estonia once again came under Soviet Russia. But people defiantly sang this song at the end of the festival and there was nothing anyone could do about it. So in 1991, when the country became free, people said it was due to the “song revolution”.

The Russian connection, however, is unmistakable at many points. In the leafy neighborhood of the Museum Circle, the elegant Kadriorg Palace stands out, built in the style of Italian villas. This is Tsar Peter’s palace that I built for his beloved wife Catherine. Kadriorg actually means Catherine Valley. Today it is an art museum with priceless collections. Or take the magnificent Russian Orthodox Church in the Old Town. Delving deeper into the past, due to its strategic position as a port on the Baltic and conveniently located between East and West, Tallinn was coveted by different European powers. This is why its pages of history are dotted with the names of many regimes. Tallinn became a particularly dynamic city in the 13th century during the Hanseatic period. People called it even then “city built on salt” because it amassed great wealth by transporting salt from Spain to Russia.

A little more familiar with this historic city now, I traveled to the well-preserved old town, which has been a UNESCO World Heritage Site since 1997. It is said to be the best-preserved medieval town in Northern Europe. Remnants of the old fortified city wall are still there as a reminder of when wealthy citizens built it to protect the city from marauders. Many towers from the 14th century are still standing. Some of them have funny names, Fat Margaret’s Tower, for example. Who was she? Well, apparently the name was given to a sturdy cannon that was there. And what about the Maiden’s Tower next to the Danish King’s Garden? Ironically, it was a prison for prostitutes. Locals say it is haunted. To add to the romance (or vicarious fun), the old town even has a ghost street (Vaimu). The street and nearby alleyways are said to show figures of nuns and monks on dark nights, even party noises are heard at a haunted house in Rataskaevu 16. As for me, I prefer to stick to the labyrinthine cobbled paths leading to the huge Center of the City.

In front of the high town hall surrounded by shops and restaurants, including a Maharaja restaurant serving tandoori, waited a medieval figure in blue and white togs. A huge mustache, a crossbow in his hand, he embodied ‘Vana Toomas’ or Old Thomas, the emblematic symbol of Tallinn. He was a poor peasant boy who upstaged pretentious nobles in an annual Spring Festival contest where a wooden parrot had to be nailed with a crossbow. He became an instant hero and recruited into the king’s service, and later became a celebrated soldier. Today, a weather vane installed in 1530 on the spire of the Hôtel de Ville salutes it. Was there a message to this triumph of the common man over the arrogant, and did it have something to do with Estonia’s free spirit?

The old town is quite charming. In the streets around the square suddenly popped up vendors dressed in period clothes selling ‘Prunus Dulcis’, Tallinn’s favorite roasted almonds coated in sugar and spices; or a lady selling local herbs and concoctions, colorful hats and woolens. The streets are also lined with shops, cafes and wine shops selling Vana Tallinn liqueur. Every door is painted brightly, even the Parliament building is covered in pink. From the city’s highest point, you get a “million dollar view” of the city below, rooftops in autumn tones and the cobalt blue of the Baltic. Yes, Estonians love color.

At Old Hansa, I taste authentic Estonian cuisine. It recreates the aura of a time when people sat on benches and wooden tables in taverns to eat and chat after a day’s work. Meat dishes take priority, it’s a cold country, but nowadays researchers are digging up old recipes or merging them to create vegetarian dishes. As we sat in the tavern, dimly lit by candles to set the atmosphere, bowls of food arrived in authentic bowls – reindeer meat, sauerkraut (a dish of pickled cabbage with or without meat or fish), wild mushrooms, salmon, vegetables accompanied by a thick soup, smoked pork, served with delicious homemade bread.

Despite the huge meal, I had to go get Kalev who sells the famous handmade marzipan. It was actually the product of a pharmaceutical experiment and it’s supposed to be the oldest continuous pharmacy in Europe since 1806. It even has a section called the marzipan museum. Estonians claim that marzipan is their own invention. The Tsar’s family as well as Soviet-era leaders in the Kremlin were fans of this confectionery. They are delicious. Bringing home a nicely wrapped box is a must.

Songs and sweets, people’s quirky sense of humor (where else can you find a “drunken forest” so called because the pines are tilted sideways by the sea wind) make Tallinn worth visiting. to be discovered.