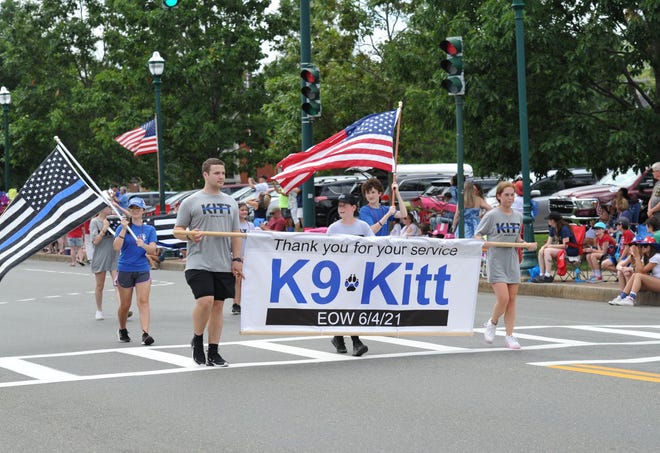 The parade kicks off a full day of festivities celebrating both the city and the nation’s independence and will include food, games and music at Braintree High School and a fireworks display on Sunset Lake.

“They say the people of Braintree are spoiled because they can celebrate the 4th of July twice,” said former councilman Sean Powers, who chairs the city’s 4th of July celebration committee. “It kicks off the summer.”

The city traditionally holds the celebration on the weekend before the holidays.

“I had to ask them several times,” Kokoros said. “They’re not looking for recognition.”

Powers added, “There are a lot of people in this community who are so proud of them. We have to recognize them through this. These guys are real heroes.”

Cushing’s canine partner, Kitt, was killed in a police shootout with a domestic violence suspect on June 4, 2021, in the woods near the Braintree Village apartment complex. Cushing and Donoghue were injured in the shootout, and Seibert was also injured.

The parade will depart at 11:45 a.m. Saturday from the Motor Vehicle Registry parking lot on Plain Street and head north on Hancock and Washington streets before ending at Hollis School. The parade route will be closed to traffic from 11 a.m. and will reopen at 2 p.m.

Powers said there will be around 100 units in the Stars and Stripes Parade, about the same size as last year. New this year will be the Woodland String Band, a group formed nearly a century ago to take part in the annual Mummers Parade on New Year’s Day in Philadelphia.

New this year will be a lounge area reserved for veterans on the town hall mall.

The parade is sponsored by Quirk Auto Dealerships, with South Shore Bank the marching band sponsor.

The high school festivities begin at 4 p.m. Saturday. More than 20 food trucks will offer a variety of meals and snacks. There will be a petting zoo, airbrush tattoos and games sponsored by Life Community Church.

“There’s something for everyone,” Powers said.

The fireworks display, one of the largest on the South Shore, begins at 9:30 p.m.

Powers said the committee has been working for several months to organize the celebration. He said the group was already working on next year’s festivities, which will mark the event’s 50th anniversary.

Kokoros commended Powers and his committee for their efforts.

“Sean puts in a lot of effort and he has great people working with him,” the mayor said.

The celebration is supported by sponsorships and donations. Donations can be made on the group’s website, braintrees4th.org.