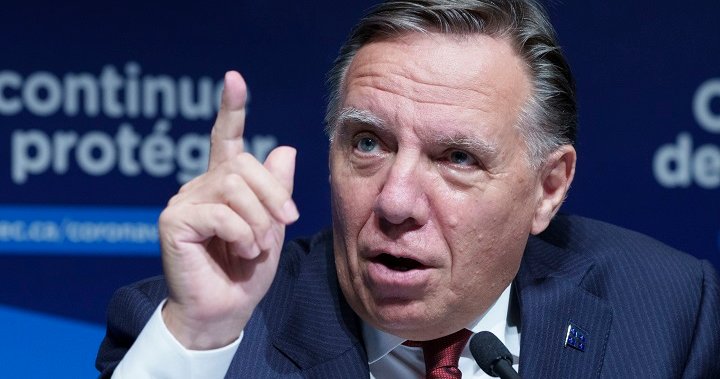 Quebec announced on Thursday a series of new measures aimed at controlling the spread of the virus as cases of COVID-19 increase and the Omicron variant makes inroads.

Quebec has reported 2,736 new infections, bringing the number of active cases to 17,400.

“I have no good news,” said the premier of Quebec, François Legault, during a press conference Thursday evening, to speak about the increase in figures.

Legault said preliminary figures to be released on Friday show 3,700 new infections. The highest number of daily cases to date was 2,880 in January 2021.

To bring down the number of cases, Legault said Quebeckers must reduce contact.

As of Monday, all stores will be operating at 50% capacity. The new measure will also apply to bars, restaurants, amphitheatres, cinemas and gymnasiums.

Legault said places of worship should also reduce their capacity to 50% and not exceed 250 people. The vaccination passport will also be required in the future in churches and other places of worship.

Only funerals and weddings, with a maximum of 25 people present, can be organized without the obligation of a vaccination passport.

High-risk activities such as office Christmas parties, karaoke and dancing will be banned from December 20.

Private indoor gatherings will be limited to 10 people, up from 20 previously announced for the holidays.

“Even 10 people, we have to be extremely careful and only do this if absolutely necessary,” said Legault.

2:15
Experts recommend stepping up booster injections in Quebec to fight the Omicron variant

Schools will not be closed, but high school students will not resume in-person classes until January 10. All school days scheduled in the previous week’s program will be held at a distance.

The measure also applies to CEGEPs and universities, but not to elementary schools. Wearing a mask is again made compulsory at all times for students.

Outdoor sports will be allowed to continue, but tournaments and competitions are canceled.

A maximum of 25 people will be allowed for indoor activities.

Legault made the announcement as INESSS, a health care research institute of the Government of Quebec, released disastrous projections regarding the number of hospitalizations in the province after taking into account new research on the Omicron variant. .

The institute said it expects hospitalizations to more than double – from the current 305 patients to 700 – within two to three weeks. Patients requiring intensive care could reach 160 in the same time frame, according to INESSS modeling.

“According to the scenario applied to our context, the strong growth in the number of cases should translate into a marked increase in the number of daily hospitalizations in the coming weeks,” he said in a statement.

Omicron FAQ: Everything you need to know about the COVID-19 variant

The institute added that it was less confident than usual in its projections because its data on the Omicron variant is based on a single study in South Africa, where vaccination rates are much lower than in Quebec.

Legault said that in addition to reducing contact, vaccination is the other weapon at our disposal in the fight against COVID.

“People who are vaccinated are less likely to get sick, even with the variant,” he said. “There is still a risk, but experts tell us we can reduce it with a third dose.”

Quebec has announced that it will accelerate the deployment of booster injections to a larger segment of the population, while prioritizing health workers and the most vulnerable.

Starting Monday, December 20, people 65 and over can start making appointments, and a week later, on December 27, places will open for those 60 and over.

Appointments for other age groups should be available soon after, with the interval between a second and third dose being reduced to three months, instead of six.

Currently, boosters are available for people aged 70 and over, people with chronic illnesses, pregnant women, health workers, people living in isolated or remote communities, and people who have received two doses of the vaccine. AstraZeneca.

Legault ended with a plea for everyone to do their part to limit the spread of the virus.

“Everyone has a great responsibility,” he said. “If everyone does their part, we can get through this together. I’m counting on you all.

– With files from The Canadian Press

August 15, 2022
Food, fun, music and activities for adults in August

Food, fun, music and activities for adults in August