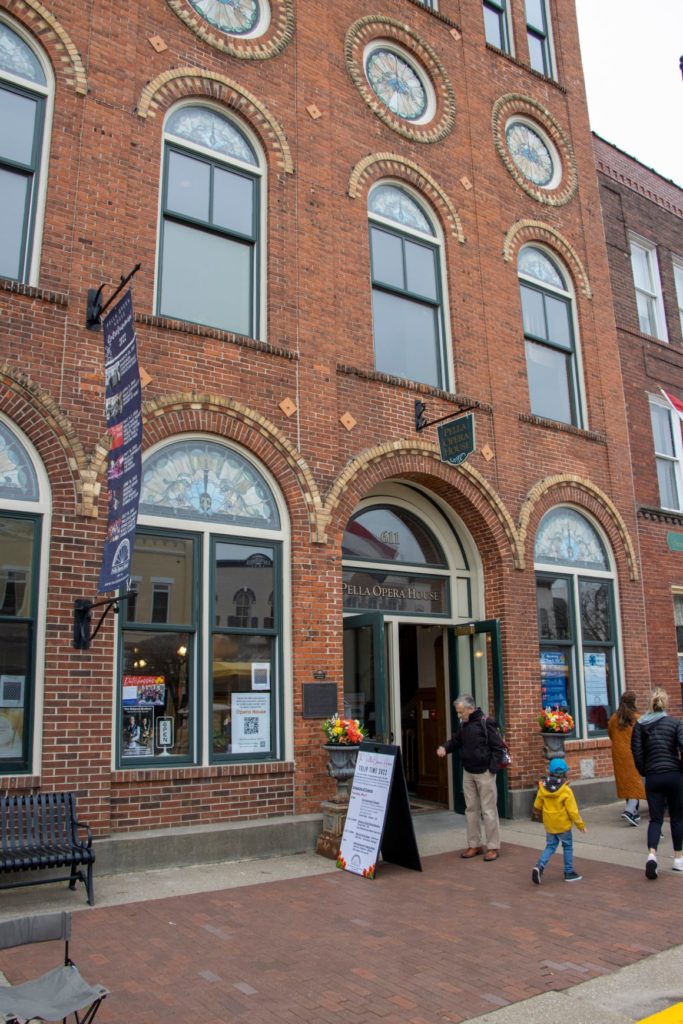 The Pella Opera House is holding an exhibition of historical photos as part of the 87th Tulip Hour celebration. Director Cyndi Atkins said the project made possible by the Pella Community Foundation shines a light on the Tulip City over the decades. She says it is part of several ongoing events and entertainment at the Pella Opera House through Saturday night. The Pella Opera House brings back The Reluctant Pioneer, The Story of Maria Scholte, a Neil Diamond Tribute Show and the Central College Flying Pans Steel Band. The Martini Huis is also open all three days. Tickets are available at the Pella Opera box office and online at pellaoperahouse.org.

Dominie Hendrik Pieter Scholte
In an attempt to pursue religious freedom, Scholte, her family and 800 followers crossed the Atlantic Ocean to the United States. Settling in land engulfed by prairie, Scholte was determined to create a prosperous town upon his arrival in August 1847. In the early years of the town, Scholte built a church, established two businesses, and became the postmaster and l land agent for the new settlers. .

Marie Scholte
The beautiful Maria Scholte married Dominie Scholte in 1845, a year after the death of his first wife. Maria did not completely follow Hendrik’s lifestyle or want to leave the Netherlands; however, emigration to the United States was inevitable. Accustomed to a lavish lifestyle in the Netherlands, she was intrigued by the culture of the East Coast. Traveling across the country and settling in an arid region was difficult for Maria who never really felt at home in Pella.

Without a doubt one of the most beautiful buildings in Tulip City is the Pella Opera House. Its sumptuous exterior continues inside, making it a must-have on a trip to Pella. Pella’s operatic beginnings began in the 1890s, when Pella was talking about building one. Eventually, in 1900, a man named Herman Rietveld decided to bring the plans to fruition, and the land was laid over the summer.
The building is 65 feet tall and 120 feet long, towering over many buildings on Franklin Street. It would be hard to miss the beauty of the building with its colorful brickwork, stained glass windows and large arches above every window. The building was designed on three floors, each serving its own purpose. The first floor housed offices and a meeting room, the second floor housed an auditorium, and the third floor served as dressing rooms. Considered one of the largest auditoriums in Iowa, the Pella Opera House was a show stopper decorated in pale green and terra cotta. The ceiling, decorated with a beautiful textured pattern, contained a stunning chandelier.
The opening piece was “What Happened to Jones” and premiered on November 16, 1900. Throughout its early years, the Pella Opera House staged various performances including silent films, plays, music and even a hypnotist in 1910. Prices ranged from thirty-five cents to a dollar depending on the show that was taking place. Attendance was generally strong and many left happy with the entertainment on offer.
After it closed in 1918 due to the influx of talkies, the Pella Opera House became home to many different businesses, until it closed in the 1980s. came together, raised over $2 million and renovated the Pella Opera House. Re-opened in 1990, the Pella Opera House now finds its mission as a historic facility in a unique and intimate setting providing quality arts, entertainment and social events to Pella and surrounding communities.

Franklin Street – 3 (3 photos over the years)

Franklin Street is home to many retail stores in Pella. From the early days of horses and buggies to Model A’s and Ts to 1940’s and 50’s classics, downtown Pella has always been the place to park and shop.

The name Paardekooper’s Drug is still vaguely visible on the building of the current local business, Smokey Row. Paardekooper’s Drug was started by Martin Paardekooper who had been in the local drug business for over thirty years. He moved his pharmacy to the southeast corner of Franklin and Main in 1942 where he established a store to serve his needs in a recognizable and beautiful location.

Looking for a modern place to eat, the Meulpolder brothers opened the Central Park Cafe on June 22, 1925. This popular cafe promised to use their modern equipment to serve quality meals even on Sundays. The cafe’s trademark was the small windmill sitting above the main entrance.

This historic photo shows the first motorized postmen in Pella.

There was a man in our town,
H. Rietveld was his name;
His enemies thought they had cut him down,
But he bounced back anyway.

He built a bank on Main Street;
It was full of three floors.
He mad the brick himself, you see––
And that’s the reason why.

He organized a national bank
With good and strong shareholders––
He had only himself to thank,
And that’s where the credit goes.

He also created a savings bank,
And shoved Rich in the collar.
His business is to give you a book
And help you save money.

Two war dogs adorn the front
Of this marvelous institution,
But the boys inside will bear the weight
Of all the persecutions.

The National Bank will open soon
In his room on the second floor:
And business is sure to boom,
And Rietveld will be in his glory.

The President in his private chair,
At the head of the establishment,
Van Spanckeren in his office where
It will interest the calculation.

Then business will take on a rosy tint,
And people will come and deposit;
The debtor shall pay all his obligations when due,
Or he’ll want to know, “How was it.”

People will learn not to be afraid
For he learned this reputation:
Whether rich or poor, he lends his aid
To a worthy man, whatever his position.

Here is the bank that cannot be destroyed,
However you take it.
With a million dollars full and round
To hold on, not to break it.

So here’s the people’s choice, you see,
Because the people must be respected.
People’s business here will be;
No good thing has been overlooked.

So here’s the bank that’s destined to win
Taking his place in line,
And welcome all who can come in––
It is the “National Citizens’ Bank”

The original fire station was built in 1882 after a series of fires in 1872, 1880 and 1882 destroyed many local businesses. The equipment used was a pipe cart, pulled by a horse or a man, and various pipes. Water was originally pumped by hand until 1895 when a water system was created and a water tower was built. This created a need for new cotton pipes, but they were difficult to drain and dry, so in 1904 a pipe tower was built. The fire station was replaced in 1954 when a new facility was built.

Organized in 1908, the Pella Overall Company was located on the west side of the square. The industry was started by a group from Pella who wanted to provide jobs for members of the community. The company originally employed twelve people and a salesman, but after twenty years more than fifty people were employed. The brand name was Garden City Overalls, specializing in jumpsuits, jumpsuits, jackets, pants and lined coats. A little Dutch boy became the company logo that became recognizable throughout the Midwest.

Located on the south side of the square, Ulrich’s Meat Market found its place in October 1880. Founded by John Ulrich, his business has been thriving for over 150 years. In the Weekly Pella Blade for October 26, 1880, John Ulrich writes about the fresh beef, pork, smoked meats, sausages, and everything else found in a first-class meat market. A product built on tradition is Ulrich’s Pella Bologna which strives to create a flavor full of history and quality.

Men have been hanging out at this local hangout for decades. Although the businesses have changed over the years, this space does not partially house the Cellar Peanut Pub.

A final look at Franklin Street’s bustling retail stores, including a glimpse of Vander Ploeg Bakery.

Thanks to the Pella Community Foundation for financial support of the historic photo exhibit. We would also like to thank John Vroom for the photographic files in his collection, Metjse Miller for his research on the history of these buildings, Cyndi Atkins and Jara Johnson for hanging the exhibition, and the Vermeer Ricoh Center for their assistance in the impression.