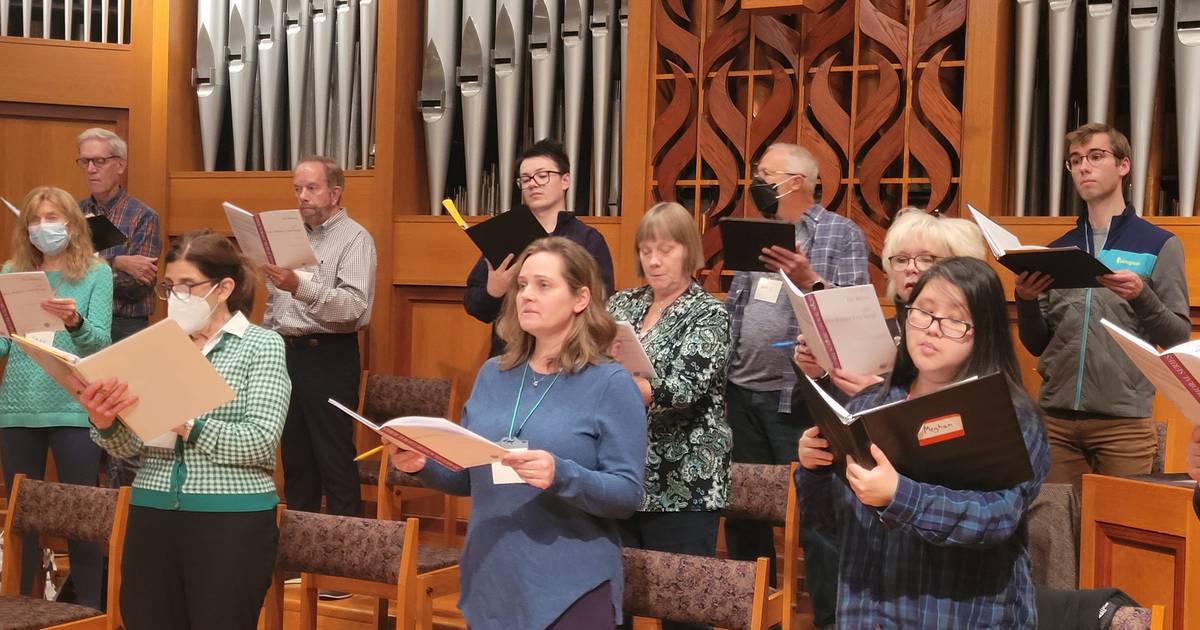 A new community choir in Naperville will hold its inaugural concert on November 20.

Philip Spencer of Naperville is the founding conductor and artistic director of the new choir. He recently retired from Joliet Junior College as a music teacher, where he taught world music and conducted college choirs. Prior to that, he taught at Grandview University in Des Moines, Iowa.

“I always felt very lucky to have a full-time job in music,” he said.

He has a lot of experience in conducting choirs, from children as young as 5 years old to octogenarians.

“This is the third choir I’ve founded and I’m just as excited as I was with the first,” he said.

Spencer spent her final year teaching entirely online, which made her realize how much she missed people singing in the same room.

“I was determined never to retire from music,” he said. “I think it was De Niro who said in the movie ‘The Intern’, ‘Musicians don’t retire, they just quit when there’s no more music in them.’ I knew I had music left in me,” he said. “I didn’t want to wait for an opportunity to come my way.”

He had a few goals in creating NaperVoice: he wanted to work and perform at a high level of skill, he wanted to give back to the community, and he wanted to be able to remunerate his members.

“We are able to compensate and pay 16 of the 35 singers we have,” he said. “I wanted to make this choir a philanthropic choir, so at each concert we will donate the net proceeds to a different local charity, the first being Feed My Starving Children.”

Singers are also committed to this mission, he said.

“Our mission at NaperVoice is ‘Sing well. Do good,” he said.

The choir members auditioned over the summer and represent about 20 different communities, from Naperville to Tinley Park to Morris, he said. They are between 20 and 70 years old.

For this first concert, he knew he wanted to challenge himself and his singers.

“About three quarters of the program is new to me too,” he said. “I like to work around a theme, so with our first concert the weekend before Thanksgiving, I thought the theme of gratitude might be feasible. So the concert is called ‘Gather in Gratitude’. And it’s around categories like thankful for home, thankful for love, thankful for moments in time, and thankful for the gift of song.Then it was about choosing interesting pieces.

He went through many rooms to find the right mix, including a variety of genres.

“We have classical selections, gospel music, musical theater and vocal jazz,” he said. “Something for everyone, really, and even some that kids would enjoy.”

On one track, children in the audience will be invited to come and learn a basic Cuban rhythm on small percussion instruments.

“The whole program will be fun for all ages, but I think it will give kids a chance to get directly involved,” he said.

In addition to the choir, the concert will feature percussionist Shelley May Hutchison, pianist Leah Kang, intern Nazarii Mykhailenko, a music student at Roosevelt University whose family moved to the United States from Ukraine a few years ago. five years ; and Mina Chang, student violin soloist at Benet Academy and concert mistress of the Elgin Youth Symphony Orchestra.

“I’m so happy that this invitation to get involved with this new ensemble…has brought this wonderful group of people together,” he said. “Naperville has many quality school and community choirs of all types. But this idea of ​​a philanthropic choir that we will give back more than just musical means in the community… that makes it unique in the region.

Some of the song selections will include “Seasons of Love” from the musical “Rent”, “How Can I Keep from Singing” by Gwyneth Walker, “That Would Be the Day” by Philip Spencer and “The Road Home” by Stephen Paulus .

He thinks the program is exciting and the audience will enjoy it.

“It may be one of the best choirs I have had the privilege of working with,” he said. “They are experienced singers who are committed to the mission and committed to each other. I think people will hear a high level of musical creation from the very first concert of this choir.

NaperVoice “Come Together in Gratitude”

Annie Alleman is a freelance writer for the Naperville Sun.