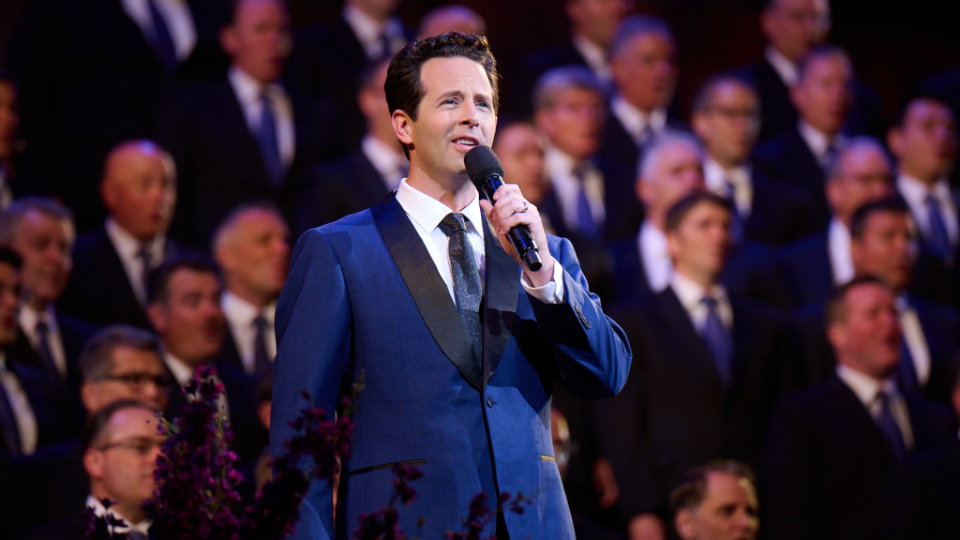 BYU opera teacher and director Shea Owens performed as a featured soloist with members of the Tabernacle Choir and Orchestra in Temple Square for their annual summer concert.

The concert, which took place July 15 and 16, marked the band’s first public performance at the Conference Center in Temple Square since the COVID-19 pandemic began in March 2020.

This year’s theme was “Love Thy Neighbour” and included music and storytelling to share a message of coming together and finding unity despite differences.

Although the Tabernacle Choir’s summer concert is known for remembering and honoring the pioneering heritage of The Church of Jesus Christ of Latter-day Saints, this year’s concert had a more inclusive theme and focused on refugee crisis.

“I remember the grand opening of the conference center and President Hinckley saying it would be a home for the arts and a place where we would celebrate the culture of our people,” Owens said. “In this concert, we celebrate the cultures of people around the world with music from different genres and eras.”

Transporting music from Switzerland to Provo

Prior to moving to Utah, Owens had worked in St. Gallen, Switzerland for a few years as an opera performer. He and his wife Madison, who is also a singer, had planned to stay in Europe for a while when they received a message about a faculty opening at BYU.

“Even though I had kind of dropped out of academia as I was in the performance world, they told me they thought I would be a good candidate, so I decided to apply and see what would happen,” Owens said.

Owens explained how the interview process was long and involved a lot of waiting.

“At the end of the day, it seems like they thought I would be a good fit because they ended up hiring me,” he said. “The best thing was that I was going to be able to teach what I’ve been doing since graduating, but also play on site, so that ended up really becoming the perfect fit.”

Owens moved to Utah last summer and said he’s loved her ever since.

In June 2022, Owens received another unexpected call – this time about the opportunity to perform as a featured soloist with The Tabernacle Choir for their annual summer concert.

“I was actually back in Switzerland doing a little recital tour when I was contacted about it,” he said. “They weren’t really sure if they could continue the concert because of COVID-19, but they finally made the decision to do so.”

Owens said the opportunity to perform at the Conference Center with The Tabernacle Choir was a dream come true for him.

Asked about the preparation that went into the gig, Owens said he was grateful he asked associate chorus director Ryan Murphy to adapt and arrange all the songs especially for him.

“In a way, learning real music is a bit easier than opera because in opera I sing most of the time in a foreign language, so singing in my native language is a bit easier,” did he declare. “However, these wonderful, beautiful arrangements are complex in some ways and it still takes me time to get the words out and find the right inflection, emphasis, dynamics and rhythm.”

Ultimately, Owens said he felt very blessed and recognized that he would not have been able to do what he did without the Lord’s help.