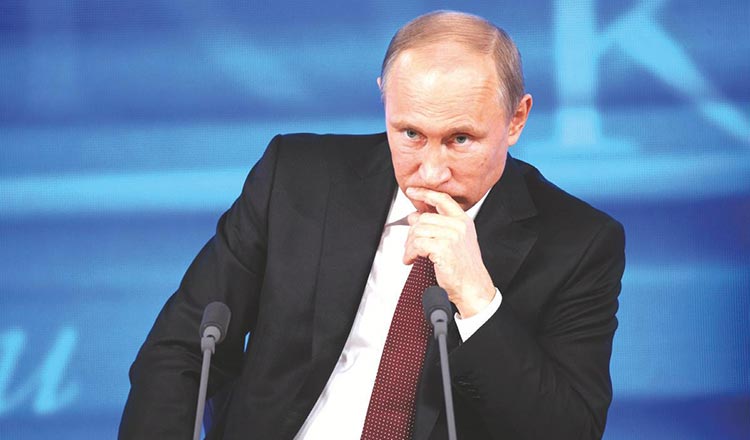 Although the story of Russia’s brutal attack on Ukraine has yet to run its course, some lessons may hold true no matter how the story ends. A key lesson is that strong and seemingly unassailable regimes can suddenly collide with moments of fragility. A related lesson is that one mistake can seriously weaken any country, even one that has remained second in the world for decades militarily.

Underestimating Ukrainian patriotism, President Putin also failed to consider three consequential factors. First, there was Ukraine’s fighting spirit. “He expected the Ukrainians to bring roses to his tanks. But they brought Molotov cocktails. This viral description is likely to continue. Secondly, European solidarity has materialized as if it came from nowhere. Third, the frayed sheet linking Europe to America that was mended with unexpected speed.

Putin also overestimated the capabilities of the Russian attack divisions. He seems to have assumed what he wanted to believe. It also seems that in Russia, where ultra-nationalism has merged with a cult of personality, no one was willing to question the master plans of numero uno.

Less known is the closeness between President Putin and Patriarch Kirill, 75, head of the Russian Orthodox Church. Apparently, these two men shared the goal of resurrecting the glorious past, as imagined, of a unified Russian world, a past that included, in addition to today’s Russian Federation, not only Ukraine but other parts of what has been described as the Great Russian Civilization or Empire of history.

Such a resurrection was a wish that other Russians also harbored, perhaps explaining the domestic support Putin still seems to enjoy despite Russian losses in Ukraine, and the crippling burden of war and sanctions that followed. .

In recent years, many countries have seen religious nationalism flourish. Buddhist nationalism has found strong support in Myanmar and Sri Lanka. Islamic nationalism, of more than one type, has been the road to power in Afghanistan, Iran, Turkey and elsewhere. Hindu nationalism is on the rise in India. A Russian nationalism linked to its Orthodox Church is not a contrary phenomenon.

Nor was it a surprise when a few Indians who claimed to be soldiers of a Hindu Sena demonstrated in Delhi in support of Putin’s decision. Corresponding to the Greater Russia remembered by Russian religious nationalists, the dream of a great Hindu entity larger than India today is nurtured by a few contemporary Indians, though most Hindu nationalists would simply reinforce the grip of their ideology in India and among Indians around the world.

Ukraine was viewed with derision by Russian religious nationalists, including Putin. When Donald Trump was US President, he too was prone to making fun of Ukraine. At the start of the invasion, Trump initially called Putin “clever” and a “genius”, although more recently, after observing America’s mood, he called the invasion a crime against humanity. Despite the scorn Ukraine has received, its “chaotic” democracy seems to have worked with remarkable courage, while Putin’s ambitious and supposedly effective nationalism seems to have caused hardship and tragedy for Russians. A Jewish President and Caucasian Muslims shouting “Allah hu Akbar” while hurling weapons at Russian tanks are just a few of the varied forces in Ukraine resisting Russian uniformity!

As for Indian Hindu nationalism, its durability is difficult to predict. The election results are only part of the picture, and even there it is unclear how much of the BJP’s recent successes should be attributed to Hindu nationalism and how much to populist welfarism, appeasement of groups of caste or other factors. The undeniable influence of Hindu nationalism on large swaths of the media and its impact on judges are matters of deep concern to many, as demonstrated when editors publicly called on constitutional authorities to protect citizens from hate speech.

We can’t trust it, but like Putin, the leaders of Hindu nationalism can also make blunders. As for the idea that greatness is gained by humiliating non-Hindus, the vast majority of Hindus in India surely hate that notion. Either way, portraying Muslims and Christians as disloyal and potentially treacherous elements can only backfire.

Today, Hindus are being asked to reconsider the view that Muslims and Christians are fellow citizens entitled to dignity and equal rights. Tomorrow they will be told that their rejection of untouchability was also a mistake, that it is not enough to belittle Muslims and Christians. This is not unlikely, as the rejection of supremacy within Hindu society has been a slow and reluctant process, and one that is usually not accompanied by genuine conviction or repentance.

Finally, the need for global acceptance, goodwill and commerce is a serious obstacle for any exclusive or religious nationalism. Ukraine has shown that even Russia, with its vast nuclear arsenal, is struggling to cope with the global sentiment in favor of the freedom of the individual and the autonomy of the less powerful.

This column first appeared in the print edition of April 8, 2022 under the title “Fragility of the strongest”. The writer currently teaches at the University of Illinois at Urbana-Champaign. The Indian Express