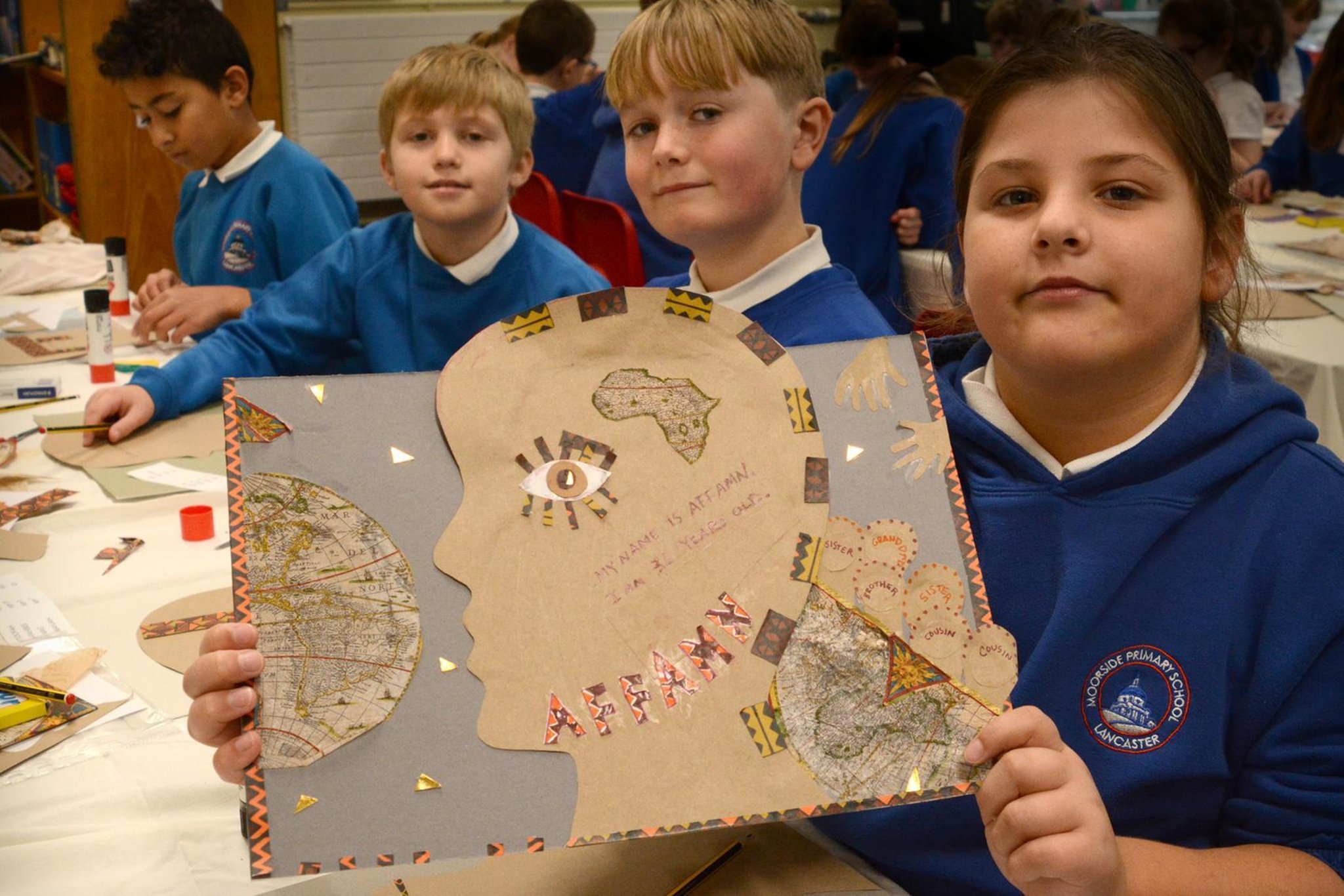 Students from Moorside Elementary School with some of their Facing The Past artwork. Photo by Darren Andrews.

he youngest students participating in Lancaster’s Facing The Past project spent a full day working with three professional artists.

Facing The Past is a new project funded by Arts Council England, which aims to reflect, reveal and repair omissions in how Lancaster has so far commemorated its role in the transatlantic slave trade.

Register to our daily newsletter

Newsletter cut through the noise

Students at Moorside Primary School with an example of the art they created as part of the Facing The Past project. Photo by Darren Andrews.

This is a collaborative project between Lancaster Priory Church, the Judges Lodgings Museum, Lancaster Black History and arts, heritage and community organizations, including More Music.

The sessions at Moorside took place at the end of Phase 1 of the project which included workshops in three other schools and community workshops over the past two months.

The teachers at Moorside had wanted to adapt their current history curriculum, which included the study of Pendle witches, to incorporate the slave trade as an example of another group of people who experienced oppression in the past. During the Facing the Past sessions, the children created works of art with public artist Venessa Scott who appeared on CBBC’s Colors show; artist and poet, Katie Eggleston-Wirtz; and Nayna Lad, professor of art and design.

Geraldine Onek, teacher at Moorside and founder of Lancaster Black History, said: “I don’t think any of us can imagine the success of this project and in a few months we would have been working with four schools offering courses. history and art lessons. workshops as well as school visits to the local museum. Many schools have contacted us since and wish to get involved and we hope to make this available to all local schools in the near future.

The young people visited the judges’ quarters during the Facing The Past project.

As part of the project, a learning resource on slavery is being created for schools so that the subject can be taught in future lessons.

Now that all of the workshops are complete, Lancaster Priory Commissioning Group, which runs Facing The Past, is discussing how to move the project forward in 2022. Facing The Past is a collaborative project between Lancaster Priory Church, Judges Lodgings Museum, Lancaster Black History and arts, heritage and community organizations, including More Music. Facing the past, Phase 1 will focus on youth, young musicians and members of the Morecambe community and a representative cross section of the Lancaster community, including the Black, Asian and Ethnic Minority (BAME) community, which represents 4.4% of the local population.

He is an active member of the Lancaster Arts Partnership and has organized numerous Light Up Lancaster events as well as his own cultural program, including the annual Song Festival.

Reflecting on its past, Lancaster Priory will be a focal point of the Facing the Past project. Photo by Darren Andrews.

The Judges Lodgings Museum, run by Lancashire County Council, commissioned Lubaina Himid’s Swallow Hard in 2007 to mark the bicentenary of the abolition of the transatlantic slave trade.

Lancaster Black History is a grassroots community group that fights racism through education. His current research project with the local population traces the links that important local families had with the triangular transatlantic slave trade.