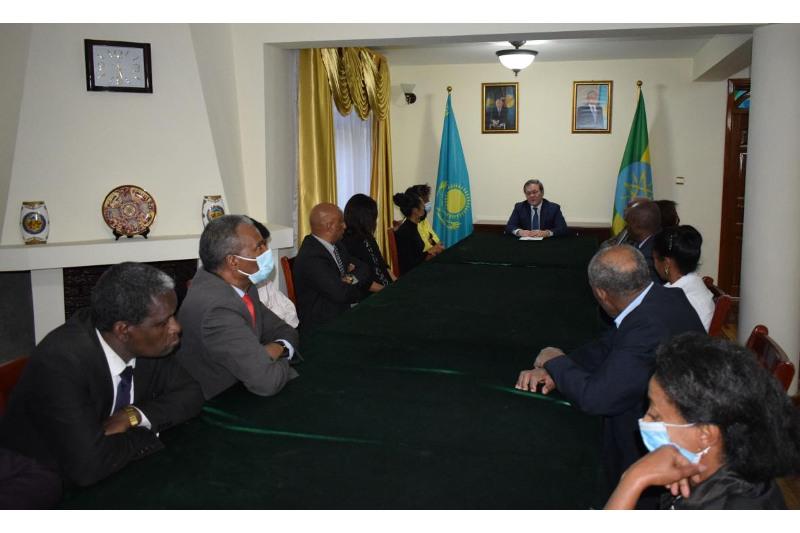 ADDIS ABABA. KAZINFORM – A roundtable dedicated to the 30th anniversary of the independence of Kazakhstan and the role of the first President Elbasy Nursultan Nazarbayev in the formation and development of the country was held at the Embassy of Kazakhstan. The event brought together representatives of the Ministry of Foreign Affairs, research and education centers, public figures and journalists from the Ethiopian media, Kazinform learned from the press service of the Kazakh MFA.

Welcoming the participants to the conference, Ambassador of Kazakhstan Barlybay Sadykov spoke in detail about the main achievements of Kazakhstan during the period of independence, as well as the role and contribution of the first president – Elbasy Nursultan Nazarbayev in the formation and the development of the Kazakh state. .

In addition, the Ambassador of Kazakhstan briefed the participants on the ongoing political reforms of President Kassym-Zhomart Tokayev, the Message to the people of Kazakhstan “People’s unity and systemic reforms are a solid basis for the prosperity of the country. », As well as the current socio-economic modernization programs of the Republic of Kazakhstan and international Kazakh initiatives.

During the event, representatives of the Ethiopian public highly appreciated the contribution of Nursultan Nazarbayev in creating and strengthening the foundations of the independence of Kazakhstan and expressed a genuine interest in studying the Kazakh path of development. of State.

As part of the roundtable, a photo exhibition was presented to the participants reflecting the most important stages in the formation and development of independent Kazakhstan.