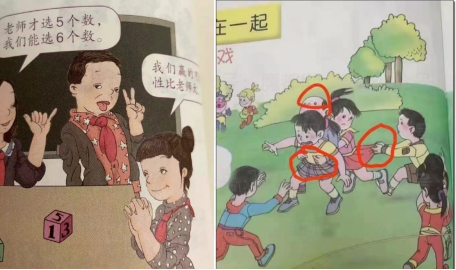 On Monday, the Chinese Ministry of Education ordered a national survey of textbooks at all levels of education after a series of complaints on social media about illustrations in elementary school math textbooks. Illustrations depicting children with broad foreheads, droopy eyes and tongue sticking out of their mouths have been criticized by some as “pathological” and “racist”. Others took issue with illustrations featuring a girl with what appears to be a tattoo on her leg, boys in bulging pants, and clothing elements purporting to resemble the American flag. 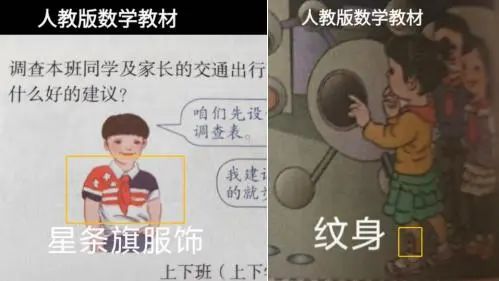 The textbooks in question are published by the state-owned People’s Education Press and have been in use for nearly a decade. It remains unclear why the drawings escaped scrutiny until some Weibo users highlighted them last week, sparking outrage from social media users, parents and educators.

The illustrations have been attributed to Beijing-based artist Wu Yong, who has made no public statement regarding the controversy. Wu’s alma mater, a renowned art school that has since been incorporated into Tsinghua University, has also come under fire from nationalists. The academy’s crest has been described by some as a kneeling man holding a fork, and interpreter like a veiled homage to Western ideology, under the guise of Western cutlery. 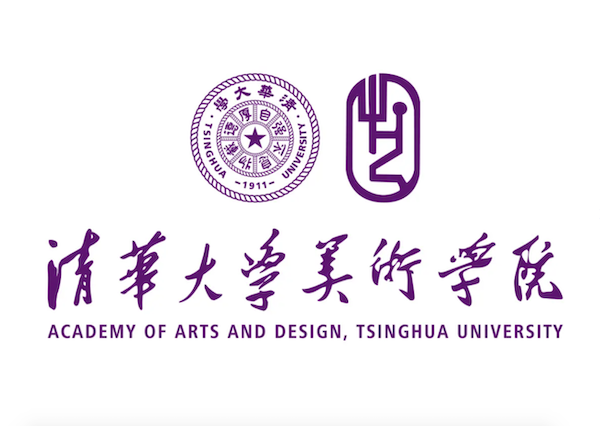 The top right emblem has been flagged by some netizens as secretly pro-Western.

One unlikely victim of the uproar is ultra-nationalist influencer Fu Yu, better known by his pseudonym Wuheqilin. An illustrator himself, Wuheqilin has been criticized for ‘whitewashing’ problematic drawings after urging followers not to politicize the discussion:

I have seen many people compare textbook illustrations from twenty years ago to those used today. Some even spoke of aesthetic and cultural decline. But I think most issues should be discussed on their own merits, not elevated [to the level of politics].

The differences, in my view, are likely the result of market forces. Over the past few decades, the industry has grown, the economy has grown, and illustrators are charging much higher rates than before. Yet the mindset of publishers and the rates they pay illustrators have not kept pace with the times. [Chinese]

Many Wuheqilin fans, however, were unconvinced by his arguments and were personally disappointed in him, as reflected by this commentary archived and translated by CDT editors:

(No more excuses, please. The Ministry of Education has been so infiltrated, it’s like a sieve. [The characters in that illustration] they look like they have Down syndrome, and the clothes they wear have elements of the American flag. The intention here is just bad!) [Chinese]

In China, public publishers have a quasi-monopoly on the publication of textbooks. The bidding process for textbook illustrations is often opaque and the pay low, which deters reputable illustrators from the field, as reported by Sanlian Lifeweek Magazine:

For outsiders, the process of publishing textbooks has become a black box. “The people responsible for the process often serve as ‘players and arbiters'” [says Jiang Chu, an art publisher].

[…] According [independent illustrator] Li Bin, illustrations for children’s storybooks, textbooks and tutoring supplements have always been at the lowest price. Illustrator pay has remained stagnant for more than a decade, with the lowest salary standing at just over ten yuan. [$1.50 U.S. dollars] by illustration. […] Successful illustrators often turn to more lucrative work in video game production, advertising, or animation. [Chinese] 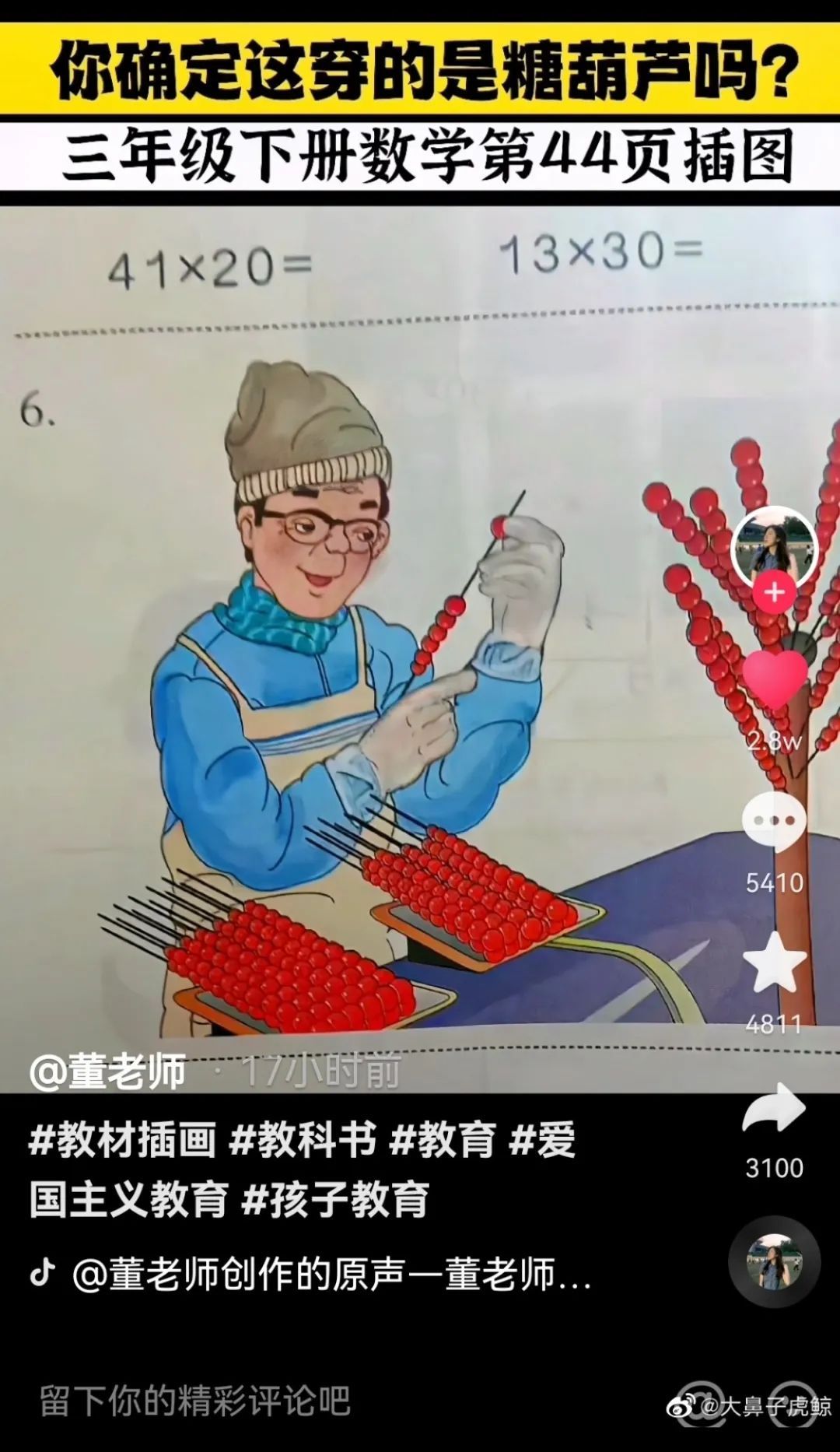 A drawing believed to have been found in another textbook depicts a man making a sugar-coated hawthorn stick, a popular dessert in northern China. Some netizens suggest the man’s gesture suggests he is holding a gun.

Wuheqilin might also wonder: why are you making such a fuss about some ugly paintings? Why are you criticizing me? Am I no longer part of the team?

[…] But as we all know, if you play with fire, you will get burned. Mr. Wuheqilin should think about this: Who created this environment in which people stopped evaluating issues on their own merits? Who established the rules that push each discussion to the level of an ideological principle? [Chinese]

Others have noted the unique struggles of visual artists in a hyper-politicized society. WeChat Blogger 海边的西塞罗 (WeChat ID: cicero2020) wrote:

As a form of pure visual art and by its very nature, painting has various meanings and is open to interpretation by viewers.

Therefore, in a hypersensitive society, any negligence or lack of skill can make a painter’s work appear deficient, excessive, or otherwise “inappropriate”, thus completely ruining the painter’s reputation.

I once interviewed an older illustrator when I was a journalist. He said that at a certain time in history, what he feared most was being commissioned to paint “The Great Leader”. [Chairman Mao]. Each time he received such an assignment (there were many), he would become wracked with anxiety and unable to sleep for days.

This is because he knew that if a single mistake was made in the painting and it was picked up by the “revolutionary masses” after publication, he would be practically dead. [Chinese]

Some netizens who criticized the illustrations in children’s textbooks compared the odd characters to people with Down syndrome, prompting others to decry ableism and call for inclusion. A Weibo user wrote:

I hope these so-called “conscientious” Big Vs aren’t trying to bolster their own righteousness by viciously slandering people with Down’s Syndrome! If you are not educated about children with Down syndrome, please refrain from hurting disadvantaged innocents with your “sword of justice!” Do you know Down’s Syndrome? You are hurting innocent people for the sake of your web traffic. You are hurting the families of people with Down syndrome without realizing it! [Chinese]

When it comes to the aesthetics of textbook illustrations, we urge people to focus on the problem itself. Stop using and vulgarizing phrases like “style Down Syndrome”. Don’t make it even more difficult for people with intellectual disabilities to be accepted [by society].

For many years, in the pursuit of equality, respect and inclusion, people with intellectual disabilities, including Down syndrome, have sought to express themselves through various means and platforms. The words we hear today remind us, however, that there is a long way to go and that there is still a lot of work to be done. [Chinese]