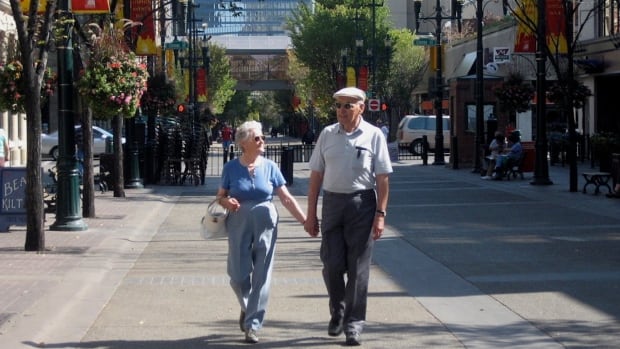 If you’re looking for advice on how to achieve a happy marriage, you might learn a thing or two from John and Bertha Wingenbach.

The Edmonton couple, “both 96 years old”, according to John, have just celebrated their 75th wedding anniversary.

They married on June 3, 1947, nearly five years before Queen Elizabeth ascended the throne.

“Our marriage was so natural…we went from single to married so naturally that it felt like it had to be,” John said in an interview. “There was never any doubt.”

Their secrets to a successful marriage boil down to prioritizing three things, he said.

“The first is very simple…choose the right partner,” John said. “Everything else will fall into place.”

The second thing, he said, is to compromise.

The third thing is to allow your partner to be their own person — “don’t try to turn them into something else,” John says.

John and Bertha grew up on farms in Saskatchewan and knew each other before moving to Calgary when they were 20 years old. Bertha worked in a hospital and John was a telegrapher with the Canadian Pacific Railway.

“We quickly became friends and it quickly turned into something more,” John wrote.

For John, the city was a scary place.

“When you’re away like that, you meet someone from back home. It’s a big deal,” he told CBC.

“So we became friends and it turned into something more. And a year later we got married.”

Similarities in their cultural and religious backgrounds also played a role in bringing them together, John said.

“We were members of the Catholic Church, which we maintained,” Bertha said.

“I have respect for him. He has the same for me.”

Before CBC interviewed John and Bertha, John sat down at a computer and typed out nine neat paragraphs of memories of their life together.

“To this day,” John wrote, “I still consider marrying Bertha to have been my greatest achievement.”

Eleven guests attended their small wedding at a church in Calgary. “Bertha wore a long white dress and a long veil,” John wrote. “She was beautiful.”

The church was followed by a meal at the restaurant and “croquet on the lawn of Bertha’s landlord’s house”. At 5 p.m., the newlyweds boarded a Greyhound bus for Banff, where they enjoyed “five glorious days…using bicycles for transportation.”

They first settled in Calgary. After a few stops in small towns in Alberta and Saskatchewan, they landed in Edmonton in 1952. John’s telegraph career came to an end. He moved into accounting and they bought their first house.

Their married life was mostly spent together. “We were very rarely apart,” John said.

They liked to take long walks – “I think it may have helped our health a lot,” he said – and were content to be at home, except for occasional trips across Canada or in the United States. John took Bertha with him on business trips.

The Wingenbachs’ marriage was an inspiration to their three children and four grandchildren, who saw them as one entity.

“When I ask my grandfather or my grandmother a question, they know each other very well,” said grandson Rodney Al.

After a lifetime together, the Wingenbachs consider it a blessing that they still know each other.

“That’s probably the biggest blessing we have,” John said.

After their first 27 years in Edmonton, the couple moved to Lloydminster and then to Medicine Hat before returning to Edmonton about four years ago.

The couple live at Rosedale Seniors’ Living in Edmonton. They had planned to celebrate their birthday as a family at home.