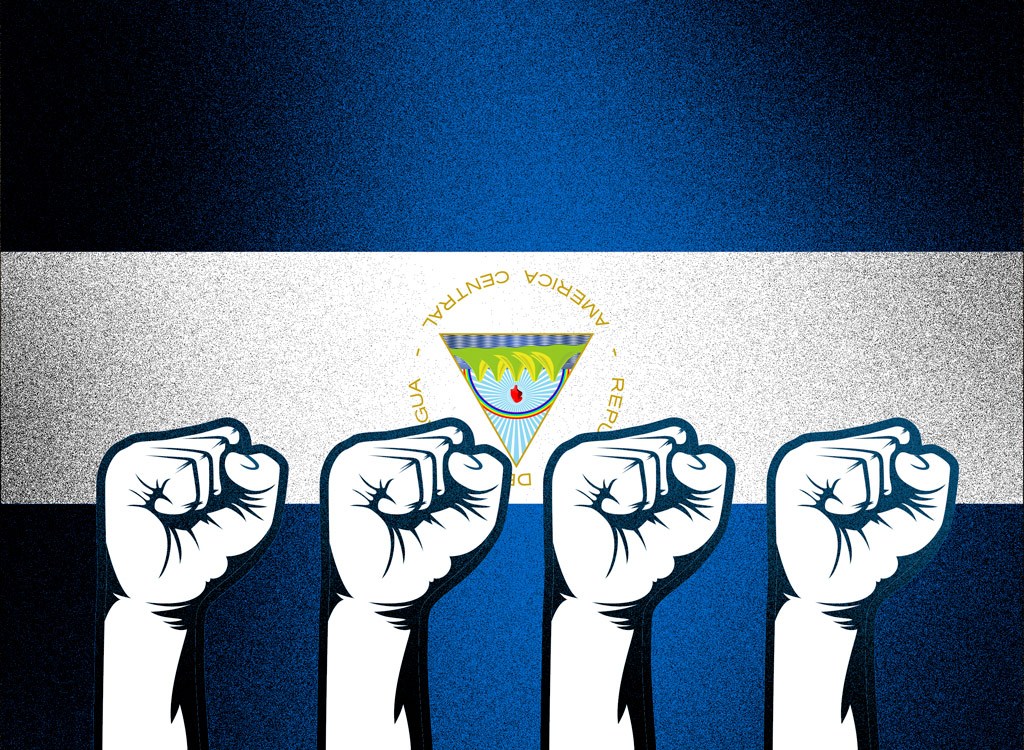 when the dictatorship was against the ropes

Jesus Tefel, Yarithza Mairena and Ernesto Medina: “The most visible leaders are imprisoned, but the grassroots leadership is intact and continues to organize”.

HAVANA TIMES – “This is a surrender table, to arrange your departure.” These words, a thousand times celebrated, were spoken by Lesther Aleman during the first National Dialogue in May 2018. They summed up the illusions that reigned in the streets choked by the barricades that the citizens had built to prevent the “caravans of death” from enter their quarters, as eventually happened.

“At that time, people in the streets had their hopes in the idea that peaceful civic struggle would end the dictatorship,” Yarithza Mairena said. “Instead, the government dug deeper. They hypocritically began calling the uprising an “attempted coup”, while continuing to block dialogue. We later learned that their sole purpose was to buy time to organize and implement their ‘cleanup’ operation,” she added. Yarithza Mairena herself was subsequently expelled from the National Autonomous University of Nicaragua (UNAN) in Managua, imprisoned as a political prisoner and released in 2019. She currently represents the Association of Political Prisoners.

The famous scholar Ernesto Medina, former dean of Americana University and UNAN in Leon, recalled the reaction of Denis Moncada, the representative of the dictatorship, when Medina read the proposal for constitutional mechanisms that could resolve the crisis. “This is the recipe for a coup d’etat!” Moncada said on reading the steps outlined: “preparing for free elections; bring the country back to the constitutional order which has atrophied; restore to the Supreme Court its former full independence…”

The April Rebellion “was capable of knocking the dictatorship down the ropes. Self-organized citizens have created all the conditions for a peaceful, civic and democratic transition. Looking back now, in retrospect, we could have done some things differently in the negotiations… some of the de facto powers could have made different proposals,” said Blue and White National Unity member activist Jesus Tefel.

One of the things they could have done differently was to establish a dialogue between the Civic Alliance – one of the opposition organizations at the negotiating table – and those on the streets. At the time, the Civic Alliance represented the majority of the insurgents.

“This lack of dialogue on the perspectives and the strategies that we were putting forward, was the factor that prevented us from launching coordinated actions to increase the pressure against the regime”, recalled Yarithza Mairena, reflecting on the things that could have been achieved. if the mobilizations in the streets had been coordinated with the points discussed in the Dialogue, and if there had been more international diplomacy.

Instead, the regime launched a campaign of violent repression via its “mopping up operation”, which stretched from late May to June and July 2018. This was followed by another wave around the same dates in 2021, when the regime imprisoned civic and labor leaders, as well as all aspiring presidential candidates, to ensure that Daniel Ortega and his wife Rosario Murillo would “win” the November 7, 2021 presidential elections.

Yarithza Rostran, Jesus Tefel and Ernesto Medina were interviewed last week on the online TV news program Esta Semana. They were invited to reflect on the lessons of the April 2018 rebellion and the efforts of the opposition four years later to move the country towards a democratic transition.

Recalling 2018, Yarithza Mariena commented, “One of the things we did not expect was the cruel repression that unleashed and the political persecution of students. The latter included more than 100 arbitrary evictions [herself included] and the imprisonment or flight of thousands of students.

Ernesto Medina echoed his view. “We weren’t prepared for the repression.” This was partly because they believed the ongoing dialogue represented the government’s desire to seek a solution to the crisis, “which was already very deep and serious”. Tefel added: “People were on the streets and Ortega made the decision to put the brakes on everything with bullets, jail and repression. We were not going to take the path of armed conflict.

Three years later, Ortega again unleashed a major wave of repression, this time using truncheons and cell bars more than bullets. As we commemorate four years since the April Rebellion, the scenario in Nicaragua includes over 170 prisoners of conscience in jails. All were subjected to fanciful trials that invariably resulted in guilty verdicts under spurious laws.

“Were we ready to face something like this? Maybe not,” Jesus Tefel said. He noted that they did not expect what actually happened – that all of their leaders would be imprisoned or forced to flee the country except for a few who were hiding in Nicaragua. “It was unpredictable. I do not believe that we could have had the capacity to receive such a blow without suffering serious consequences,” he confessed.

“The country cannot continue in the direction it is currently heading. While it’s true that Ortega has consolidated his power into total control, people too have given signs that they’re not going to resign themselves to continuing to live this way. They demonstrated this determination on election day last year, with the same silent protest that we see every day,” stressed Ernesto Medina.

The three leaders coincided in their overview of the current situation. The opposition faces four major challenges: organizing a broad national leadership; broaden its vision to include sectors that are currently silent; benefiting from the support expressed by more than 20 Foreign Ministers of the continent; and regaining the trust of Nicaraguan citizens, providing trustworthy leadership that can give continuity to the struggle that erupted in 2018.

“The main thing is to promote the various opposition leaders who still exist. They are essential to continue this peaceful civic struggle,” Tefel said. “The opposition is there. It is true that the most visible leaders are in prison, but the territorial leaders remain. The grassroots leadership is still intact, although hidden. They are not demonstrating in the streets, but they are there, getting organized.

Referring to the need to renew, expand and reinvigorate the push for unity among citizens and organizations that was forged in the heat of the April rebellion, Ernesto Medina considers it “disturbing” that two of the most important sectors – private industry and the church – continue to remain silent.

Medina noted, self-critically: “We have maintained a culture of confrontation and threats against the private sector, perhaps with a reason. However, a responsible opposition must understand that the private sector is a key player in Nicaragua’s future. Instead of pushing them into the arms of dictatorship, we need to forge closer ties, in order to build a broad alliance, which is the only thing that can end dictatorship.

Meanwhile, Jesus Tefel pointed out that the “complete abstention” with which citizens responded to the November 7 election farce, as well as “statements by some government officials that they are ‘fed up'” are as much signs of “growing discontent within the Sandinista Front, a phenomenon largely caused by the actions of Rosario Murillo and Daniel Ortega.

The demand for justice

“Being found guilty of crimes against humanity would not only put Ortega in a dilemma internationally, but it would also provoke internal questioning within the Sandinista Front. Rosario Murillo has mentioned the charges of crimes against humanity in her last interviews, precisely because she fears that justice is something she will never escape and can never solve,” said the former prisoner Yarithza Mairena.

Professor Medina sees how, little by little, the old monolithic control of the Sandinista Front over its basic structures is eroding. He acknowledged that “the opposition has a great responsibility in their hands”, but added: “the future is complicated (…) especially if the opposition lacks the courage, the honesty, to assume the responsibility of put aside the positions that continue to divide us”. .”

“If we manage to build a clear strategy that can excite people and make them feel like they have responsible leadership to turn to, with clear ideas, I think a new movement could start that could end with the rejection of Ortega,” Medina said. .

These efforts must be accompanied by a “less polarizing, more citizen, more national” discourse, which seeks a solution “among Nicaraguans”. This involves understanding that the greatest obstacle to a better future for Nicaraguans is “this dictatorial system, which has led us to levels of poverty and misery that we cannot solve as long as the same people remain in charge”, said Jesus Tefel.

In the international sphere, Tefel acknowledged that one of the problems of the struggle that exploded in April 2018 was the lack of coordination between the different means of pressure that can be exerted against the dictatorship – from timely demonstrations to international pressure.

He recalled that the pressure of the international community is exercised “through diplomatic channels, by convincing the decision-makers of other governments. These channels work slowly, whether we like it or not. But this is what we have, and this is the way we must seek.

Looking at the situation in the country with an eye to the future, Jesus Tefel summed up: “The organization of citizens, political and social organizations, must be prepared for the coming context”. This means not going back to the past situation, where citizens had no one to represent them, the political party system had collapsed and there was no widespread belief in civil and labor organizations.

“What there was amounted to total fragmentation. We have to overcome this fragmentation, partly caused by the regime, but also partly because, as a society, we ourselves have carried this trend,” Tefel explained.

Fragmentation was displayed, for example, during the conformation of the National Coalition. Ernesto Medina recalled how participants in this effort have become embroiled in thorny discussions about whether or not to allow political parties to participate, ignoring the fact that political parties are the vehicle for participating in any kind electoral contest.

“After that, with an opposition so fragmented and decentralized among the most visible leaders, no one knew how to transition to a strategy that would lead us to elections. In addition to the separation of all the groups which do not agree with the participation in the elections, this [vacuum] caused a rift that we are still trying to repair as members of the opposition,” concluded Yarithza Mairena.