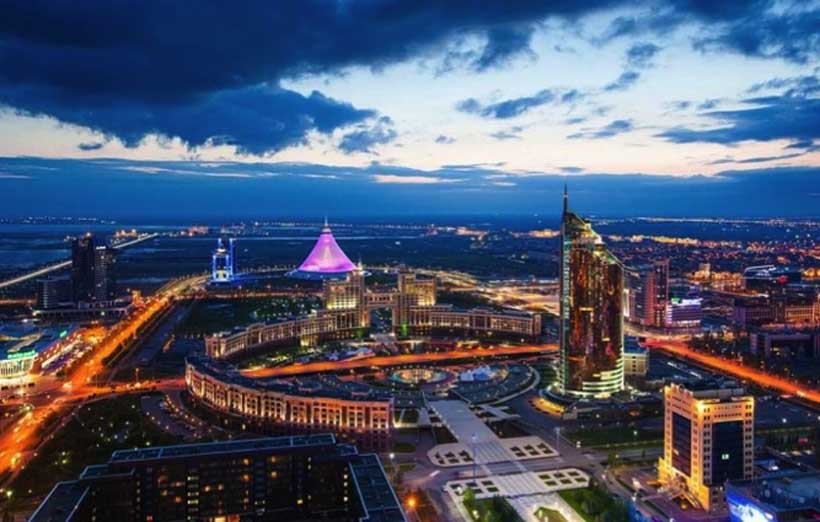 The wave of protests that swept across Kazakhstan from the first days of January 2022 has been replaced by riots and uncontrollable destruction. It feels like it’s all happening according to a pre-planned and prepared script. Although the events in Kazakhstan are unique in their form, they are somewhat reminiscent of the events in Georgia, Syria, Azerbaijan, Ukraine and Belarus, which took place in different years. The suppression of artificially created riots, the neutralization of “terrorist” groups and the suppression of anti-government revolutions, or, conversely, the deployment of a “peacekeeping” mission to overthrow the opposition and ” protect the government or the people”, in any case, followed approximately the same scenario.

In the January clashes, the role of several actors is not excluded. The spread of peaceful protests in the Mangistau region to major cities in Kazakhstan, with the help of some trained gangs, led to riots, looting and killings. The protest moved away from initial demands for lower fuel prices. It continued with calls for the resignation of the president and the government, the implementation of political reforms, the recognition of the criminalization of the administration of the USSR, etc. The violation of the “red security line” of the Government of Kazakhstan gave impetus to the deployment of CSTO peacekeeping forces. Although there was no external threat to the integrity of Kazakhstan, the introduction of Allied troops exceeded the expectations not only of the West but also of the countries of the region. The dismissal of Nursultan Nazarbayev from the post of head for life of the Security Council, the demonstrative demolition of his bust, the dismissal of his supporters and the opening of criminal proceedings against his associates – this whole “purge” carried out by Tokayev is no doubt a well thought-out staging aimed at closing the political era of Nazarbayev and the beginning of a new era in the person of the Russophile Tokayev.

Kassym-Jomart Tokayev, who took office in 2019, has long been in the shadow of Nazarbayev, who held de jure power. A graduate of Moscow State University, Tokayev worked for many years in the USSR Ministry of Foreign Affairs. In addition, he served as Deputy Secretary General of the UN, Chairman of the Councils of Foreign Ministers of the CIS and the Shanghai Cooperation Organization. Therefore, it is not difficult to understand Tokayev’s loyalty to Russia and the immediate call for “first aid” during the January turmoil.

Tokayev’s claims that trained foreign forces orchestrated the riots and attempts to justify sending in CSTO forces appear feigned and fictitious. On his Twitter account, Tokayev shared information, which he immediately deleted, about a series of terrorist attacks in Kazakhstan and the mobilization of around 20,000 terrorists. Also, on the pages of social networking sites, fake videos of the appeals of militants disguised as Islamic State Islamists have appeared, calling for a holy jihad against Russia and the CSTO. In fact, it is a vain attempt to give the impression that Kazakhstan has been attacked and targeted by terrorism. Against the backdrop of protesters’ posters, “Don’t kill us; we are not terrorists! The statements of the Kazakh President “Open fire on non-silent demonstrators” sound harsh and ruthless. Amazingly, over 10,000 people were arrested as “terrorists” during the so-called purge.

While Tokayev, like Bashar al-Assad, is willing to go over the heads of his people to protect his power, Russia’s interests are broader. Putin is trying to assert his political and military dominance in the post-Soviet space by recreating the USSR. The implementation of this plan began in the 90s of the last century. Putin’s first steps to restore the Great Empire of the USSR began in Abkhazia and Ossetia. After that, this plan included Crimea and Donbass, which offered Russia geostrategic priority on the southwestern border and access to the Black Sea. Then an agreement was reached with Belarus on the creation of a Union state, and a peacekeeping contingent was also deployed in Karabakh. The scenario was the same in all post-Soviet countries: disgruntled crowds; the deployment of a Russian military contingent; expansion of influence in the region; unification with Russia at the request of the Russian-speaking population.

The statements of some deputies of the Russian State Duma on the annexation of the Russian-speaking region of Kazakhstan to Russia, following the same scenario as in Crimea, are not without reason. It is no coincidence that the center of the protests moved to Almaty. The largest Russian-speaking diaspora is concentrated here: Russians represent 26% of the two million inhabitants. The province shares borders with Kyrgyzstan and China. Kyrgyzstan is actually under the control of Russia.

Kazakhstan is the second largest oil exporter in the former Soviet Union, with 1.6 million barrels per day. In addition, there are rich deposits of hydrocarbons and metals. The region is geostrategically advantageous and one of the central transit nodes of the Great Silk Road. From a strategic point of view, it has access across the Caspian Sea to Iran, Europe, Turkey, Russia and China. Kazakhstan, which is positioned as the essential link in the “One Belt, One Road” project, maintains close economic and commercial ties with neighboring China. It is the largest economic center in Central Asia. China initially invested $40 billion in the “One Belt, One Road” project: Belarus and Kazakhstan are two crucial transit hubs. Kazakhstan is the departure point for Chinese goods to Eurasian markets; Belarus is the last point. As the largest transit hub, these regions are not just a transshipment point but a major investment hub. In this sense, Russia’s influence in Belarus and Kazakhstan is driven by political goals and economic interests.

By directing CSTO forces to stabilize unrest in Kazakhstan, Russia has sent a multifaceted signal to its rivals. On the one hand, it showed that the Kazakh bureaucratic power is incapable of ensuring the political stability of the country. Therefore, only Russia can solve the “crisis” and control the instability, which can turn into a disaster for the “One Belt, One Road” project. On the other hand, it signals to the West that any sanctions against Russia will not violate it since it will gain more by expanding economic and trade relations with anti-Western China. In current realities, cooperation between China and Russia has a specific weight in the world economy and trade and can establish Russian-Chinese dominance over the entire Eurasian continent. Russia’s message is also directed against the Turkish Union. The Organization of Turkish States becomes one of the centers of power in the new world. It is no coincidence that the French press affirms that the events in Kazakhstan are linked to a rapprochement with Turkey. The strategic rapprochement and cooperation in the political, economic and military fields between the two countries is probably not to Russia’s liking. For Russia, which “lost” to Azerbaijani-Turkish unity in the Karabakh conflict, the Kazakh case is, in a sense, vindictive. Currently, we observe the rivalry between the two countries in the struggle for influence and power in the region.

In particular, the new geostrategic reality in the region after the Karabakh war, the integration of Central Asian states into Turkey through the Trans-Caspian and Zanguezur corridors, the preparation for the introduction of free trade and uniform tariffs for transit clearly show that the Union of Turkic-Speaking States will soon broaden its horizons not only in collaborative projects and investments, but also in military-political cooperation. The Shusha Joint Statement on Allied Relations, signed between Azerbaijan and Turkey on June 15, 2021, can rightly be considered the first such herald. Russia fears that the idea of ​​”Great Touran” will spread from Kazakhstan to other Central Asian countries. In this sense, Nazarbayev’s decisions in favor of the Turkish Union would be a serious obstacle for Russia. It is no coincidence that Nazarbayev came up with the idea of ​​the Union of Turkish States. Unlike Tokayev, Nazarbayev pursued a more balanced policy with the West, Russia and the Turkish world, which allowed him to vary between the major powers and implement large projects.

Events in Kazakhstan are reminiscent of the December 1986 events in Alma-Ata, also known as Jeltoksan (December Riots), which took the form of mass protests and popular uprisings against the communist government. In 1985, the USSR Ministry of Internal Affairs drew up a “special operational plan for dispersing demonstrators, dubbed “Blizzard-1986”. A special, pre-developed plan guided the actions of law enforcement agencies: to allow events to develop, and then to use insignificant forces to suppress them, to stir up passions, and only then to apply the most cruel measures – both against those who violated the order and the innocent, thus contributing only to an even greater aggravation of the situation. According to published data, 8.5 thousand people were detained in this “purge”. The demonstrations of January 2022 follow the same scenario. Even if Tokayev firmly declares that the peacekeepers will not remain not in the country, Igor Panarine, a consultant for the Political Cooperation Department of the CSTO Secretariat, said that in the event of a “crisis”, the CSTO’s mandate would be revised.

Attempts to create a wave of protests in neighboring countries following the events in Kazakhstan are not excluded. Thus, all post-Soviet countries should be aware that no one is immune to the USSR’s time machine: Rusophilia tends to absorb national consciousness.

Massive protests broke out in Kazakhstan on January 2, 2022, against the doubling of gas prices. As a result, CSTO peacekeeping forces deployed in the country; they are headed by the Commander of the Russian Airborne Forces. January 10 has been declared a national day of mourning.