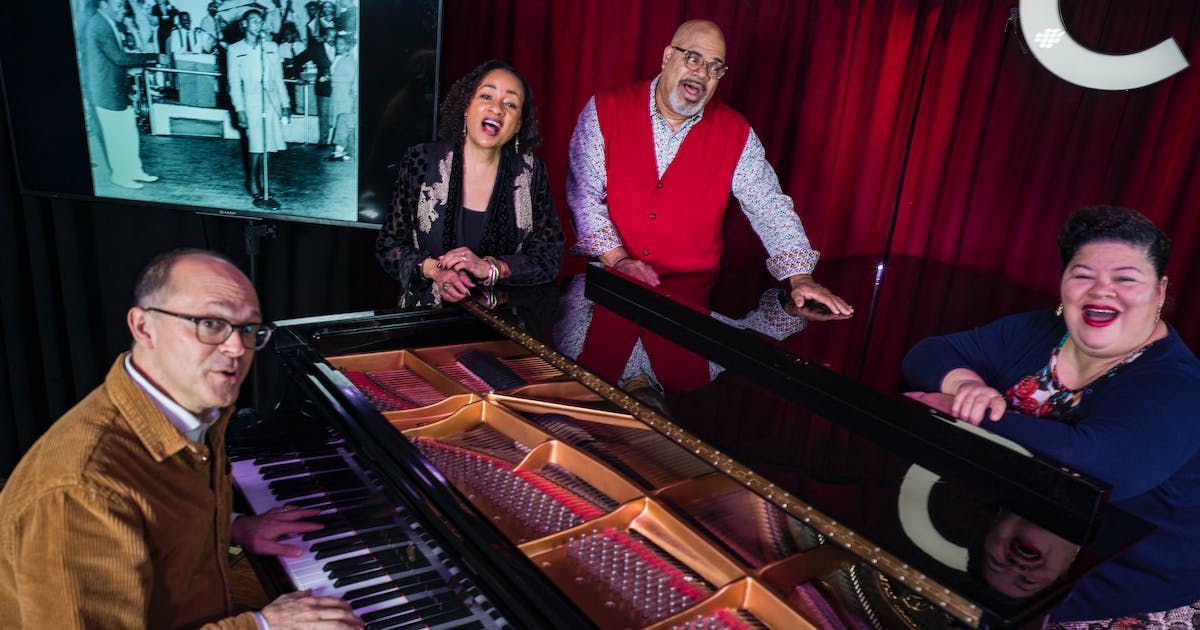 Thomasina Petrus lights up the stage with her growling and robust voice, girdling a gospel favorite of Mahalia Jackson. Charmin Michelle soothes with her sweet and jazzy vocals on a Nat King Cole ballad. T. Mychael Rambo brings the bass profundo gravitas to the blues, Little Walter style.

Between all these great tunes from the show called “Rondo ’56”, there is a message. A harsh message, a disturbing, disturbing message. A message about institutional racism, the lack of respect and contempt of a community, about the brutal extinction of a neighborhood of the Twin Cities in the 1950s and 1960s in the name of so-called progress.

This is the story of Rondo, the predominantly black neighborhood of St. Paul that was displaced by the construction of the Interstate94.

There is no way to water it down, even if you decorate it with stylish clothes and catchy vintage songs. Historical photos and spoken word – the words of people who lived in Rondo at the time – tell the real story, sandwiched between a nostalgic hit parade of R&B, blues, gospel, jazz and rock ‘ n ‘roll.

“It’s like trying to explain something difficult to children. This show is like that,” said singer / actor Petrus, who will perform “Rondo ’56” on Thursday and again Nov. 26 at Fridley’s Crooner’s. “I love the way the information is given around the songs and the photos. It’s not about lying or softening the reality. It’s about really thinking about how we deliver the whole truth. “

Rambo, who has lived in the Rondo region for 30 years, feels he and the other singers are playing the role of contemporary griots, the African storytellers.

“We are the keepers of history through song,” he said. “I think [this show] is medicinal. Music opens and heals wounds at the same time. “

Commissioned by the Minnesota History Center, “Rondo ’56” was premiered in 2010 by St. Paul’s keyboard scholar Dan Chouinard. A year earlier at the center, he presented “Mambo Italiano”, a musical program about the Italian neighborhoods of Twin Cities, even though he is not Italian. The History Center wanted more musical performances for its auditorium.

A bit of a history buff, Chouinard decided to investigate Rondo because he had friends who grew up there and he often cycled through the area on his way to his home in the Summit Hill neighborhood.

He spent months browsing the records of the Minnesota Historical Society for vintage photos. He has read books – including “Voices of Rondo”, an oral history by Kate Cavett – and uses oral history passages in “Rondo ’56”. He spoke to Rondo alumni, including trumpeter Melvin Carter Sr. (grandfather of the mayor of St. Paul), who wanted to play music instead of talking, so they jammed to Duke Ellington tunes.

It seems fitting for a white man – who grew up in Richfield and lived on a hobby farm in Lindstrom for 10 years before earning a degree in French and Italian at St. John’s University – to create a show on black history?

“It was a sharp question mark and some uneasiness at first, writing this show and knowing that I was a white narrator saying, ‘I haven’t been through these stories,'” Chouinard admitted. “But it’s important for all of us to know these stories enough to be able to tell them accurately and with compassion and with a sense of purpose. And humility.

“Humility is perhaps the most important quality to bring to this increasingly fractured era where it may take a little more effort to learn the stories of others because it is so easy to get along. let ourselves be carried away by our own stories. “

The singers of “Rondo ’56”, who are black, see no disconnect in a black themed show created by a white musician.

“As a black person, I don’t mind finding things in our history by people who are not black,” Petrus said. “If we feel comfortable telling the whole truth, there is nothing to fear. Dan is a great storyteller. He loves finding beauty in history and showing humanity. It’s like holding on. hand in the spooky part of a haunted house or something; he doesn’t hesitate to show the whole truth. “

Even though Rambo felt up to date with the information as a longtime resident of Rondo, he discovered that he had learned a lot from this project.

“I learned that I didn’t know what I thought I knew,” he said.

“I also learned something about my own ability to be present because this story mixes storytelling, historical facts and songs in a way that I don’t do a lot,” continued the veteran of musical theater and the nightclub scene.

“It comes with a lot of responsibility. Because we are looking at ancestral heritage, it became something that I felt more committed to. These are real things. You can’t just play through it.”

Since 2001, Chouinard has led annual black-focused programs for Martin Luther King Day at St. Joan of Arc Church in southern Minneapolis. The singer / pianist / accordionist has put on many other themed shows around the city, including a Civil War play for TPT, a review based on the letters and songs of Leonard Bernstein and “Café Europa”, on his travels on the WWII sites in Europe.

Chouinard and company presented “Rondo ’56” in 2010 and 2011 featuring Rambo and two former Rondo residents, Yolande Bruce and Cynthia Johnson. Petrus signed on for a presentation in 2014. Michelle joined Crooner this summer.

The content, as well as the cast, have evolved.

The previous iteration was “presented from a third-person lens,” Rambo said. “There is an intimacy to this version based on how Dan [has] we engage with our own personal feelings and stories. Its intimacy, its immediacy and its seriousness. “

At Crooners, Michelle loved the audience members’ reaction out loud. “We were mentioning a cafe. And someone shouted ‘Yes’,” said the veteran singer but first-time actor. “It relaxed me.”

Neither strictly speaking a musical review nor a play, “Rondo ’56” surprises patrons.

“A lot of people didn’t know what to expect. When they went through what they went through, they found it was more than they had imagined,” observed Rambo. “It was like digging up history, finding artefacts that people had the chance to see firsthand.”

After at Crooners, people wanted to talk to the actors.

“I would meet people every night who had connections or lived in Rondo,” said Chouinard, pianist and conductor of the show. “This woman had a picture of her father, owner of the Treasure Inn, standing behind the bar. He is 107 years old now.”