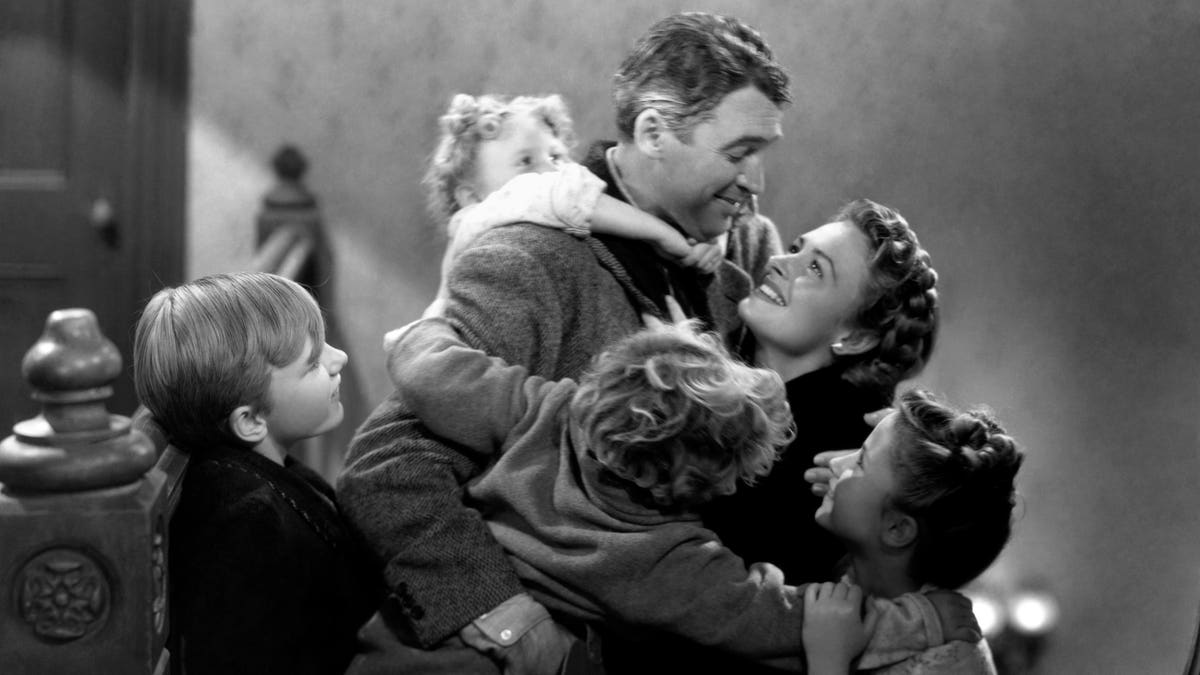 “It’s a special year,” enthused Karolyn Grimes, who played Zuzu Bailey in director Frank Capra’s holiday classic. “I am grateful for what I got from this film. For 75 years people have been watching this movie, and it’s such a positive feeling, and I think it’s a gift to humanity that Frank Capra has given us.

It’s a wonderful life tells the story of dissatisfied businessman George Bailey, played by James Stewart, who receives a visit from an angel who shows him what life would be like if he had never been born. Although it was not a box office success when it was released in 1946, the film and its message have become iconic.

“Celebrating 75 years of means something different from other milestones,” explained Jimmy Hawkins, who played Tommy Bailey. “50 was a big hit, but 25 years later, we’re still talking about it. It’s getting bigger and bigger. What about the other 1946 films that won Oscars? How many offer something like this. It’s a wonderful life is special, and it’s all because people need his message. They have shared it with us time and time again in all kinds of situations, even prisoners in Attica. It’s great to say “75 years old, and we’re still here”. It is the most beautiful gift.

However, the 75th anniversary did not allow either of them to celebrate the film with fans as they usually would.

“I travel all year round to It’s a wonderful life. I do conventions, I do giveaways, I do special screenings, and I missed it so much, ”said Grimes. “Interacting with the people who love this movie is like a positive feeling around you. We have a festival every year at Christmas, in Seneca Falls, New York. The feelings that go around, because people who love the movie le understand and they are special people.

“You feel that tremendous amount of love, kindness, and it’s so rewarding because we are all here for one thing, and that is to talk about this wonderful movie and to put into practice some of the things that we have. learned by watching it The film is like a Bible when it comes to giving of yourself and the things that make life wonderful.

On that note, I asked Grimes and Hawkins to come up with some life lessons they learned and that It’s a wonderful life teaches us.

Happiness is where you find it

Karolyn Grimes: I think at the end of the movie, where George Bailey goes through all the emotions, he realizes how much he has really contributed and helped other people. He also learns what is important in life. It was not his dreams for himself, but his love for his family and his neighbor. The lesson we learn is that sometimes we have to follow our dreams, but if that doesn’t happen good things can happen. You have to see the bright side of things and do it your way. You have the power to make it happen for you.

Jimmy Hawkins: George wanted to see the world. He wanted to build things and what he learned in this movie was that he had it all. At the end of the film, George realizes that what he has is his dream. Everything he was going to look for was there from the start.

We are all important

Hawkins: The most important thing for me is what Frank Capra was trying to say is that we are all important and we can all make a difference. You can make lists of lessons to be learned in life from now until the coming of the kingdom, but that’s the message, and it’s so important. The story of It’s a wonderful life is about a man who sees what life would have been like if he had never been born. Frank read three scripts that had been written, and It’s a wonderful life was not the title at that time, and purchased the rights which included some sort of Christmas card with the original story. He never saw anything in the other three scripts that captured him as well as this card did. The idea of ​​seeing how different things would be if you had never been born and had an impact on the world is so compelling. We all leave our mark.

The reward can outweigh the sacrifice

Hawkins: Something like this is very personal. When you watch the movie you see what George went through to get the award and then you reflect on your own life. He was right for the way he did it, and the way you do it can be right for you. Sometimes when you are a donor you don’t even know you are doing it. You just gave. George Bailey didn’t take a second. When this guy jumped into the water, he was right there and didn’t think for a second, ‘Oh, I could drown.’ He just did it. This is how some people are, but either you are like that or you are not.

Grimes: Number one on my list was learning to give to others. From my personal experience, I had a son who committed suicide. He was 18 and had a whole life ahead of him. I was so shaken and upset that I just didn’t know where to turn. I used to volunteer at a high school, and a priest there kept telling me to come back. I thought I couldn’t face the kids, but he kept pushing, so I turned around and started volunteering again. I realized that giving of yourself is a healing thing. It helped me heal. I started working in nursing homes, volunteering, and singing a lot in a few places, and it made me feel whole again. I will never recover from my son’s suicide, but giving myself to help others has made a huge difference in my life.

Never underestimate the importance of integrity and good character

Grimes: I think forgiveness makes your life wonderful. You must learn to forgive and not hold a grudge. I think it is very important. Always look for the positive in a not-so-good situation. I think it helps improve your life and you become a better person by doing this. If you dwell on the negative in your life, or it comes your way, it can’t go anywhere. If you bet on the positive and try to reverse it, you will have a wonderful life. Second chances are also so important. Always give someone a second chance. I think it is crucial to do this to make your life as good as possible.

Grimes: You can go to the grocery store and smile at someone, and it might change their day and make them happy. Have a smile on your face. It’s so unfortunate but necessary that people wear masks right now because we can’t see your facial features, but smiling at someone can make a big difference. I think there are so many ways to positively touch each other’s lives with minimal effort.

Hawkins: The whole theme of the movie is how one life affects so many others, and most of the time we have no idea. It is mind boggling. What if Frank Capra was never born? We wouldn’t be sitting here right now talking to each other about that. There is no way we will do this. Just because he was born, it happens. What if Capra was taken out of the equation? Oh my God, this movie touched so many lives, and I’m so grateful for it.