UK-based Nigerian pastor, Tobi Adegboyega, has responded to those clamoring for his head for his brazen show of support for the afrobeats genre and its stakeholders.

The flamboyant man of God said this during a recent church appearance where he addressed thousands of young people.

According to Adegboyega, he has only just started listening to the genre in recent times and it is commendable that young Nigerians have been able to make something of themselves despite the obstacles placed before them. The cleric instructed other Christians to show their support for Afrobeats as it is the only way to influence the genre and get music stars to hone the quality of their song lyrics.

Watch the man of God speak below:

“Jesus never drove sinners away, He showed them concern and love before preaching the word of GOD to them. You cannot win a sinner by rebuking him, that will drive him further from GOD.”

“The problem is that religion has clouded our senses, we determine what is right and wrong through our sentimental reasoning but He came for the lost to be saved. Pastor T spoke the truth. May we always listen to understand.

“The church is not for preaching to the converted weekly, it is for kingdom influence. That is the main idea here.” 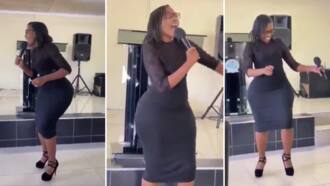 “Everything the pastor talks about always inspires me, don’t chase them, get them to improvise their song to be better and fantastic.”

“Sir, with all due respect, there is a time and a place for everything, and no man, no circumstance, no situation should take the place of God, especially in what you have consecrated and ordained as his sanctuary. Secular music has no place in God’s house whatsoever. Stop it!”

Meanwhile, Legit.ng reported that a Nigerian recently took to social media to declare his support for the ministry of Pastor Tobi Adegboyega.

According to the individual, he would rather attend Adegboyega Church than go to the ministry of Apostle Johnson Suleman.

The individual also hurled jabs at the UK-based pastor while suggesting he had nothing to do with the ‘heavenly race’.