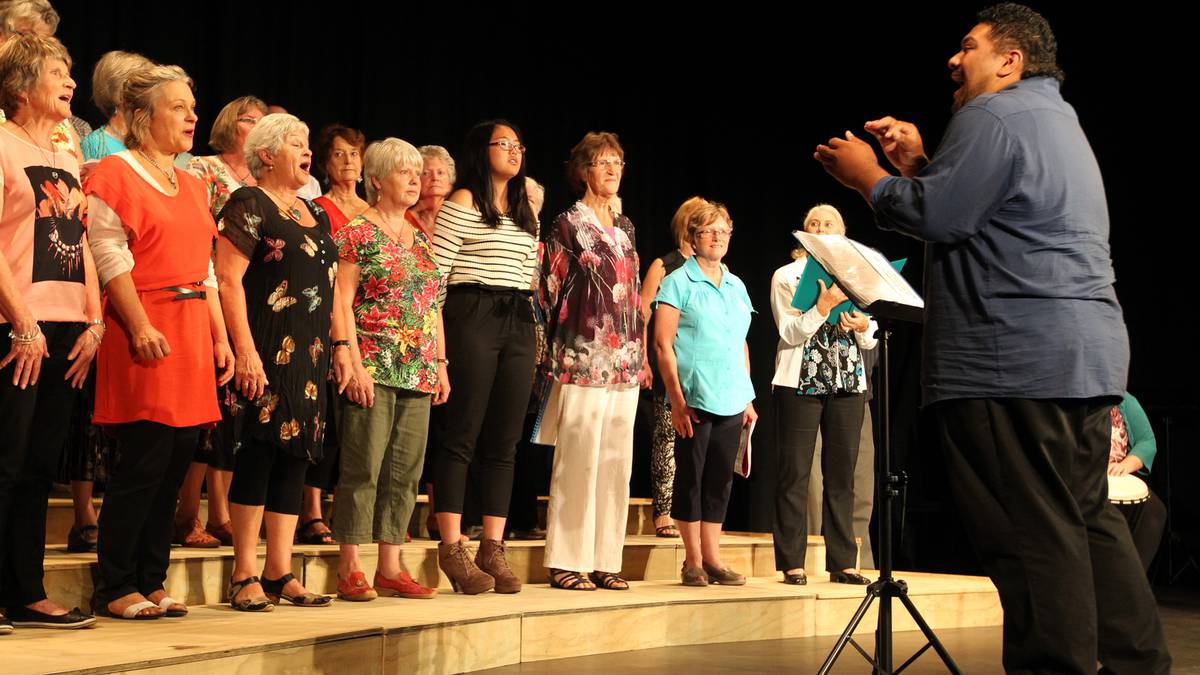 The Century Theater at MTG Napier may have undergone reinforcement after an earthquake, but will the roof remain in place when the HB Community Choir and HB Community Orchestra come together for a concert next month?

The CommUNITY concert is the brainchild of Charlotte van Asch, conductor of the HB Community Orchestra, who visited the choir a few months ago to hear the type of music they sing.

“She then asked our leader, Tevivi Daniel, and the choir members if we’d like to host a concert together,” said longtime HB Community Choir member Cathy Kingston.

Charlotte applied for a grant from Napier City Creative Communities, which was successful.

“We were all very excited because with Covid our numbers were seriously dropping and those of us who stayed were singing in masks – not a pleasant practice but we all had to protect ourselves.”

Now in her 12th year, Cathy says the choir is a fun group and the concert will be a fun afternoon of music and song.

“We didn’t want to have to give up the weekly appointment, and we attend for the pleasure of singing.

“With the success of the grant, we are now in the process of rehearsing, publicizing and promoting the combined concert, which will feature elements of the choir alone, orchestra alone, and both bands performing together.”

The Hawke’s Bay Community Choir began with an introductory singing workshop, followed by regular meetings at Clive Hall. The first director was Chelsea Savaiinea, who used her guitar to accompany the vocals.

“From the start, the choir focused on music from around the world, learning songs from word sheets projected on the wall,” Cathy explains.

Tevivi Daniel became the next director, with ukulele and piano accompaniments added to the guitar. Songs are also sung a capella and often four-part songs for soprano, alto, tenor and bass are taught.

“The number of participants fluctuates between 25 and 50, including a core of regular members. Everyone is welcome, all ages, genders and cultures.”

In the past, the group has performed at markets, nursing homes and choir festivals. Cathy says the choir is well known for their ability to project a cheerful presentation, without having to read the book in front of them.

“In fact, the motto is ‘sing for joy’ and this is evident in the choice of music and presentation.”

Hawke’s Bay Community Orchestra was formed seven years ago and fills the void in the community music scene after the long-running Sinfonietta closed.

Now held at St Peter’s Church in Hastings on Saturday mornings, the orchestra is an enthusiastic group of regular members playing string and woodwind instruments, rehearsing a range of music from classical to more contemporary arrangements.

Custodian of the former Sinfonietta’s music library and one of three orchestras run by the Hawke’s Bay Orchestral Society, the orchestra is slowly growing in numbers and hopes to continue to attract new adult musicians, Charlotte says.

“Players who are getting back into playing orchestral instruments, picking up a second instrument, or starting from scratch are invited to come and find out if this community musical activity is right for you.”

■ Details:
What a COMMUNITY concert
When: Saturday, December 3, 2 p.m.
Where: Century Theatre, MTG
Info: Tickets $10 each. Available online at store.mtghawkesbay.com or at MTG.