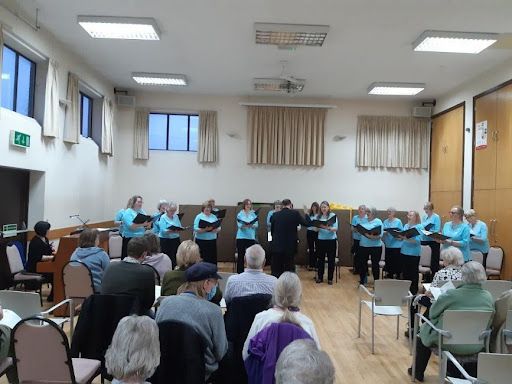 Submitted by The Lydian Singers

A women’s choir in Farnborough, Hampshire has appointed a new musical director after 30 years.

Former Lydian Singers Music Director Ian Morrish has announced he will step down in October 2021, and after testing several candidates the choir has chosen Ian’s son Jeremy Morrish to replace him.

Jeremy was involved in music from an early age and by the age of 10 he was playing in several wind bands and orchestras on trumpet, trombone, euphonium, piano and violin, and has received a music scholarship with Buckinghamshire County Music Services.

A spokesperson for the choir said: “Jeremy, who is the choir’s 4th musical director in its 65-year history, has already taken over and the choir members really appreciate his spirited approach during rehearsals.

Upon leaving school, Jeremy joined the Life Guards Mounted Band, part of the Household Cavalry, and while attending the Army Military School of Music, Kneller Hall, he graduated as a performer on the euphonium, one of the first in the UK. to earn this distinction from the Royal College of Music.

During his service with the Life Guards, he traveled to many parts of the world with his band as the State Trumpeter.

Jeremy has performed at investitures at Buckingham Palace and performed for the Royal Family and their guests in the ballroom at the State Diplomatic Ball. Jeremy also provided a musical arrangement for Her Majesty’s Birthday Parade, Trooping the Colour, which was performed by the Household Cavalry Mass Bands during the Birthday Parade in 1992.

The choir received a Covid recovery grant from Rushmoor Council this year and they plan to use it to refresh the appearance of the choir with a new uniform and to purchase new music.

Get all the latest news, updates, things to do and more from your local InYourArea Feed.