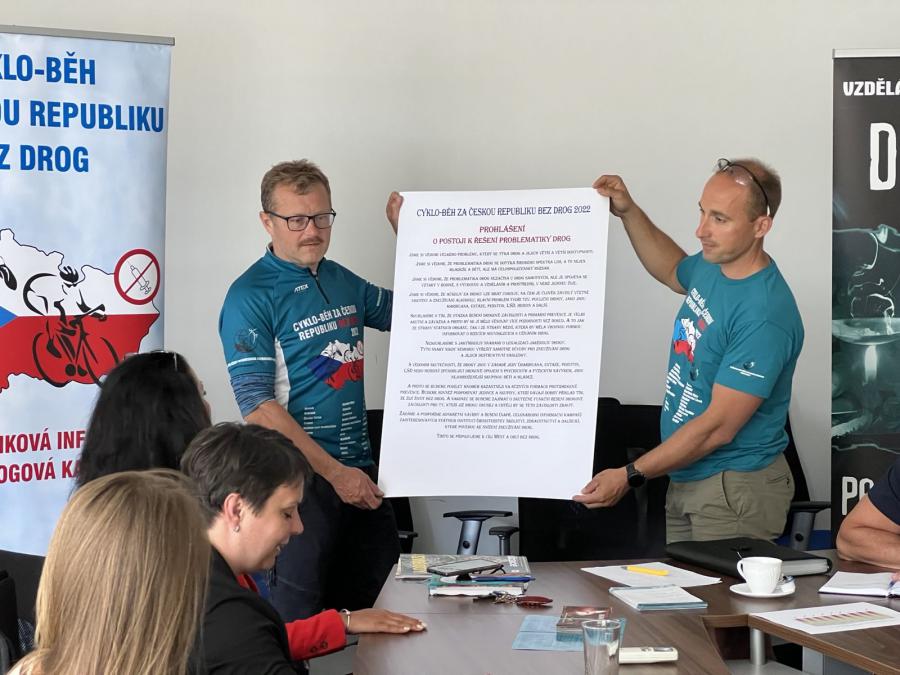 Drug-Free Ride with the Mayor in Czech

BRUSSELS, BELGIUM, June 23, 2022 /EINPresswire.com/ — The United Nations has designated June 26 as the International Day Against Drug Abuse and Illicit Trafficking “to promote action and cooperation towards the goal of an international society free of drug abuse.” And at no time has it been more urgent to do so.

Along with activities by Scientologists in Europe and around the world to mark the International Day Against Drug Abuse and Illicit Trafficking, the Scientology Network marks the day by focusing on humanitarians working to end the drug abuse crisis in cities around the world.

According to a study published in 2018, illicit drug use is responsible for more than 750,000 deaths per year. In the United States alone, the Centers for Disease Control and Prevention indicates that more than 105,000 lives were lost due to overdose in 2021. Dr Christian Mirre, of the Drug Free Europe Foundation, explained that ” most of the cocaine available in Europe, using well organized networks, continues to be smuggled into the largest European Union (EU) container ports located in Belgium (Antwerp), the Netherlands (Rotterdam ) and in Spain (Valencia and Algeciras). In addition to Hamburg (Germany), ports in France (Le Havre, Dunkirk, Marseille), Romania (Constanta) and Italy (Gioia Tauro), have also become important points German authorities have attributed the recent increase in seizures in the Port of Hamburg to the activities of Albanian-speaking Organized Criminal Networks (BundesKriminalAmt, 2021)”.

No wonder the United Nations Office Drugs and Crime (UNODC) calls for “urgent action to protect people, including by strengthening prevention of drug use…” And that is why they have chosen #CareInCrises as this year’s slogan for the International Day against drug abuse and illicit trafficking.

Each Church of Scientology in Europe and around the world has prepared and organized a series of events to mark this day. A very special event occurs in the Czech Republic, where, faithful to the commitment of L. Ron Hubbards to help end the scourge of drugs, volunteers embarked on a 14-day cycle race, with more than 150 kilometers daily cycling, visiting 41 town halls and lecturing more than 10,000 children about the side effects of drugs.

For those who want to be inspired, it’s as simple as activating the Scienotology Network in their own language and learning how drug prevention activists are saving lives.

A global problem requires a global solution. That’s why the Church of Scientology developed Truth About Drugs, one of today’s largest non-governmental drug education and prevention initiatives. In 2006, the Foundation for a Drug-Free World, a secular non-profit corporation, was established to serve as the primary distributor of educational materials and to develop new materials to meet the challenge of ever-changing drug trends.

Scientology Network celebrates the International Day Against Drug Abuse and Illicit Trafficking this year by featuring episodes of the original series Voices for Humanity, documenting the work of drug prevention activists who are saving lives:

On the streets of Los Angeles, former drug addict David Sanchez uses materials from the Foundation for a Drug Free World to give kids the street knowledge they need to make the right choice to live drug-free. “I knew I had to find a way to educate people,” he says. “Knowing something that could hurt you is half the battle in being able to defeat it.”

Some 8,700 miles away in Malaysia, Khai Aziz, lead singer of hard-core punk band Second Combat, uses his music to send the message to young people that there’s nothing cool about using drugs . Straight edge is hardcore punk whose followers abstain from using drugs. And with drug dealers targeting younger and younger children, Aziz is fighting back by using the Foundation’s Truth About Drugs initiative to reach children in school.

The life of Lithuanian-born Ingrida Lingyte was forever changed when her mother was killed and her sister paralyzed in an accident caused by a drunk driver. Years later, while visiting Colombia, she fell in love with the country and made it her home. To combat Colombia’s drug culture and the suffering it causes, Lingyte and his team reached one-fifth of the country’s population with the truth about drugs. And they are still going strong.

Episodes about these and many other drug prevention activists will air throughout the day, showing how people of all backgrounds, nationalities and affiliations are using the Truth About Drugs initiative to raise awareness about drug addiction. drugs and help people make the decision to live off drugs. – free lives.

According to the United Nations Office on Drugs and Crime, “evidence-based prevention strategies working with families, schools and communities can ensure that children and young people, especially the most marginalized and poorer, grow up and remain healthy and secure into adulthood and old age”. age. For every dollar spent on prevention, at least ten can be saved in future health, social and criminal costs.

Noting the role drug addiction plays in the disintegration of the social fabric, Scientology Founder L. Ron Hubbard wrote, “Research has shown that the single most destructive element present in our culture today is drugs.

The Foundation for a Drug-Free World was established in 2006 to serve as a primary distributor of educational materials and to develop new materials to meet the challenge of ever-changing drug trends. The Foundation has grown into a network of some 200 chapters around the world. With the support of the Church of Scientology and Scientologists, it provides the secular Truth About Drugs curriculum and materials free of charge to drug educators around the world.

Voices for Humanity is an original series of short documentaries from the Scientology Network featuring changemakers of all faiths, cultures, and nations as they help their communities through Scientology-sponsored humanitarian programs.

Since launching with a special episode featuring Scientology ecclesiastical leader Mr. David Miscavige, Scientology Network was viewed in 240 countries and territories around the world in 17 languages. Broadcast from Scientology Media Productions, the Church’s worldwide media center in Los Angeles, The Scientology Network is available on DIRECTV Channel 320 and can be streamed on Scientology.tv, mobile apps, and through Roku, Amazon Fire and AppleTV.


EIN Presswire’s priority is source transparency. We don’t allow opaque clients and our editors try to be careful not to weed out false and misleading content. As a user, if you see something we missed, please bring it to our attention. Your help is welcome. EIN Presswire, Everyone’s Internet News Presswire™, attempts to define some of the boundaries that are reasonable in today’s world. Please see our editorial guidelines for more information.