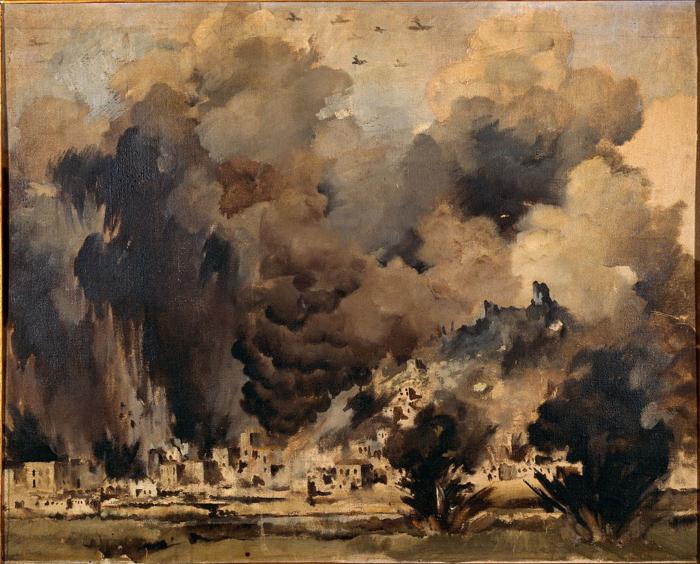 February 15 marked the anniversary of the Allied bombing in 1944 that turned the monastery to rubble and killed an unknown number of asylum-seeking refugees.

The hairpin turns were breath taking, especially for someone with a fear of heights. As we climbed higher and higher, I alternated between covering my eyes and glancing at the remarkable scenery unfolding below the narrow Italian road that spiraled up to the summit of Monte Cassino.

I was en route to one of Christianity’s greatest monuments as well as the site of a controversial World War II Allied bombing that wiped out the monastery at the top.

Monte Cassino, southeast of Rome, is where Benedict of Nursia is traditionally believed to have founded his monastery in 529, bequeathing to the world what has become known as the Rule of Benedict. There are Benedictines in Orthodox, Catholic and Anglican communities around the world.

In ancient times, Monte Cassino once housed a pagan temple dedicated to Apollo, and as a monastery it once housed Saint Thomas Aquinas.

February 15 marked the anniversary of the Allied bombing in 1944 that turned the monastery to rubble and killed an unknown number of asylum-seeking refugees. Fortunately, some ancient artifacts had been evacuated earlier, but the human and cultural loss was still heartbreaking.

On February 10, we celebrated the feast of Saint Scholastica, considered the twin sister of Saint Benedict. Tradition tells us that the siblings were very close and were buried together at Monte Cassino.

The destruction of the monastery was particularly devastating as the bombardment may have been based on false information. The Allies, struggling to reach Rome, heard conflicting reports of Germans occupying the monastery. They were more likely sequestered in the hills below the site.

When the bombs fell, monks and refugees were in the crypt under the monastery. They heard the percussion, and the cries of those above. The devastation was almost total, although the famous bronze doors, built in 1066, have been salvaged.

The day I visited Monte Cassino it was peaceful and beautiful. It was the very beginning of spring and there were few tourists as we walked around the monastery, rebuilt with significant American contributions.

When the clergy abuse scandal and subsequent cover-up in the Church first broke several years ago, an old friend wrote to me lamenting, “What happened to our Church? mystics, monks and the mass?

It seemed to me that Monte Cassino was that church, dominating the plains of Italy.

However, World War II was not the only occasion for destruction at Monte Cassino. History tells us that at the end of the 6th century, the Lombards stormed the monastery. In 884, it was the Saracens. In 1030, the Normans looted the place.

And yet, the Rule of Benedict has flourished and continues to enrich the Church.

War is a terrible thing, and as I write this, the world is once again on edge as the Russian army masses on the Ukrainian border. History is a tale of so many unsuccessful and brutal wars. Will we ever learn?

As Americans, we must carefully consider our own role in promoting peace. This year, the United States passed the second highest defense budget in US history, based on inflation. In my own lifetime, I’ve seen dubious wars in Vietnam and Iraq, and a war on terror that may have produced more terrorists than it eliminated.

“We can no longer think of war as a solution because its risks will probably always outweigh its supposed benefits,” Pope Francis writes in the encyclical “Fratelli Tutti, on fraternity and social friendship.”

Monte Cassino reminds us of the two sides of the human experience: the humble quest for the mystery that is God and the horror and destructiveness of sin.

– Effie Caldarola is a columnist at the Catholic News Service.

Recent articles in the Spirituality section