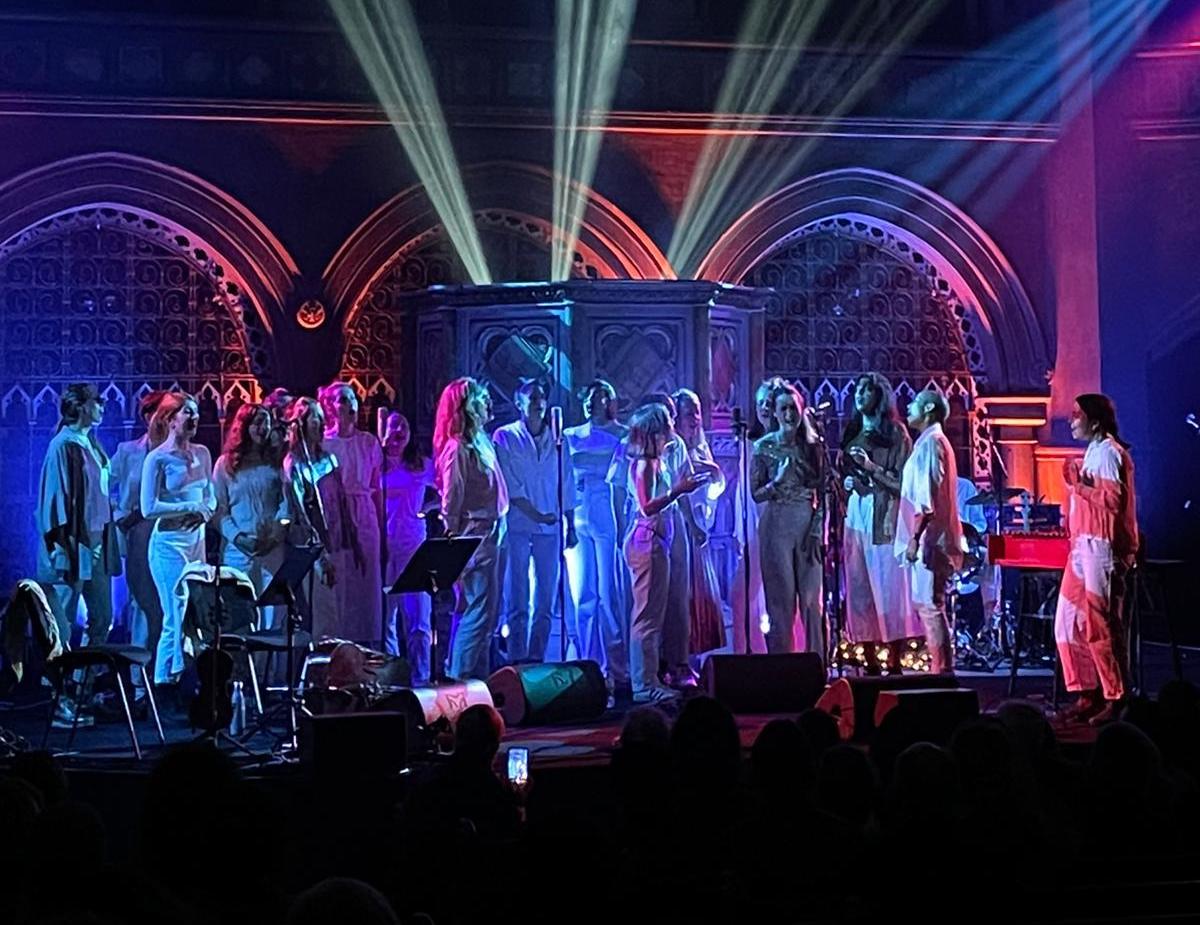 A stunning performance by the London-based Deep Throat Choir and three other Bella Union artists at the label’s Christmas event.

With the name Winter Wonderland, Bella Union’s Christmas program feels like an alternate reality to the eponymous entertainment in Hyde Park. If the stained-glass rosettes of the chapel evoke the illuminated Giant Wheel, the atmosphere is festive and intimate. Quite the opposite of the frenzy of cookie-cutter mass events.

All of Bella Union’s dedications, the featured artists seem to have certain things in common. The melodic approach of C Duncan and Penelope Isles could trigger a reflection in the direction of psychedelic folk of the 60s. On this journey through time, Fleet Foxes would be an intermediate step. There is also minimalism, sound transparency and allure. The latter can especially be attributed to Laura Groves, whose floating voice fills the space with intense desire.

Among this lot, Deep Throat Choir may look slightly different. Formed by Luisa Gerstein in 2013, the collective started out as a group of five friends who found choral singing therapeutic and joyful. By 2017, the year of their debut album Be OK, they had transformed into a 30-member choir, with occasional session musicians joining in on live performances.

True to its name, Deep Throat Choir is a solid body of an ensemble that contains many micro elements, including vocalists and instrumentalists. While each of these voices is very individual, they feed off of one powerful energy. Such unity creates a sense of community that is probably akin to the experience of the Mavericks who founded Union Chapel in 1799. Like individual singers striving for integrity, the choir ostensibly expresses a desire to merge with the world artistic heritage. They start the set with a cover of You Can’t Kill The Spirit by feminist composer Naomi Morena. “No one can push back an ocean. It will go up in waves ”. Framed by folk songs, these mantra-sounding lyrics are powerful.

When their singing in unison, song-like singing reaches polyphonic power, it is difficult to avoid the direct emotional message of the music. It aims at the level of the heart. Their deliverance is deeply spiritual and rebellious at the same time. Although evoking associations with Polyphonic Spree, it is unlikely that they will be characterized as a cheerful and merry collective. However, the acoustics of the church add to the sound image of Deep Throat Choir a pleasant halo of reverberation.

It is interesting to compare the live versions to the recorded songs because you can associate them with a performer. Featuring different soloists, all of the compositions of their latest In Order To Know You are defined by distinct timbres. In Patience, written and conducted by Rosa Bowler Slade (member of indie-folk duo Peggy Sue), the alto voice delivers a vanishing emotion, taking up an unsettling sense of the song’s background. Slade wrote this song shortly after his mother died. Katy-Beth Young’s sweet soulful voice on Unstitching leaves you with a different kind of emotion. As the song gradually transforms into a reverberating sound wall, there’s seemingly no way to escape a feeling overflowing with tenderness.

By performing together, Deep Throat Choir and other collectives are finally giving their audiences a much needed soothing Christmas spirit.

All the words of Irina Shtreis. Other writings of Irina can be found in the archives of its author.