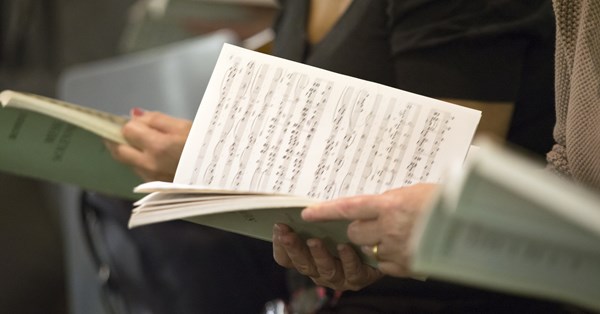 And now the enduring excellence of this virtuoso ensemble stems from its current director, Graham Ross, who himself studied music at Clare, and who this month brought his choir to St Mary’s, Warwick, promoted by the flourishing Leamington Music, as part of a whimsical new choral festival dubbed “Warwick – A Singing Town”.

Clare’s many CDs speak volumes. That Ross has programmed so many premiere recordings is one of the feathers in his hat. This 50th anniversary was prefaced with something startlingly original: “Iceland: Eternal Music”, a true rarity, featuring sacred music by ten Icelandic composers — names such as Thorvaldsdóttir and Ásgeirsson, and a Requiem by Sigurður Sævarsson — on whom the chorus’ expressive evocation of ‘cold, crystalline atmosphere’, ‘hypnotic world of sound’ and ‘instinctive contemplation’ won universal acclaim.

October 2022 marks the 150th anniversary of the birth of Ralph Vaughan Williams. It formed the center of Clare’s almost entirely enchanting Warwick performance. The choir has already done its part by releasing a record that includes another new treasure: the music of RVW (1905) to accompany Ben Jonson’s 1620s Pastoral Masque Pan’s Birthday (The Shepherd’s Feast), featuring Timothy and Samuel West as speakers. All their records are available on the Clare choir website.

Appropriately, Vaughan Williams’ unaccompanied mass in G formed the heart of this tantalizing programme. One of the many virtues of the choir is the way all voices move effortlessly from soft, soothing sections to louder full sections, and back again. Renaissance music, especially that of Byrd, permeates the music, and the clarity and delicacy of the singing richly gave vent to this sometimes almost subliminal aspect.

A rather crushing header line cast temporary doubt on the Kyries’ balance, although some great beauty soon followed. It also preceded: No such problem arose with the imitative counterpoint to Robert Wylkynson’s fabulously thick music Jesus autem transiens (from the Eton Choirbook), its hovering and bold anticipation perhaps of Sheppard.

Ten works infiltrated the mass (plus three by better known RVW). A strident solo in Judith Weir’s exultant ee cummings “I thank God for most of this amazing day” almost grated, while the lead tenor soloist was sheer unrelenting joy to hear. Graham Ross’ chorus perfectly captured the intimacy of Howard Skempton’s simple, sensitive and partly iambic treatment of Yeats’ “Cloths of Heaven” (“Walk Softly Because You Tread On My Dreams”), preceding Gloria from RVW, in which the unexpected sweetness, pianissimo opening, its fragility picked up by all the voices with touching sensitivity (and a nice hint, I think, of solo alto), quickly turned into wonderful resonant paragraphs.

What an emotion to encounter the Magnificat of W. Denis Browne, who perished at Gallipoli. In an assertive style similar to his contemporaries (Dyson or Sumsion, even Noble), he gave Clare’s two organ scholars another opportunity to shine, with inspiring registrations and flawless precision. Coincidence: the Dean holds the Sir William McKie Organ Scholarship. McKie was Dennison’s mentor when he was growing up in Sydney. Let’s hope Peter Dennison is especially and rightly honored at Clare’s upcoming celebrations.