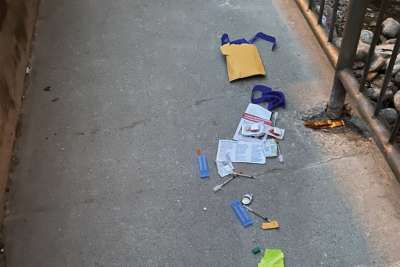 Efforts to relocate the Bond Place emergency shelter located about 30 yards from St. Michael’s Choir School – unhelpful so far – have left mother Jennifer Franssen Keenan worried, demoralized and on the verge of despair.

The shelter took over the Bond Place Hotel in August 2020 to house homeless people during the pandemic, and parents at the prestigious downtown Toronto school say the shelter, which includes a safe injection site, has created significant safety issues for children in grades 3 through 12 since school.

Franssen is a member of the Parent Safety Group, which was started after the shelter opened. Parents say their children have witnessed drug dealing, drug injections, assaults and lewd acts on the school steps. Guards remove used needles, condoms and other items of concern daily.

“We’ve seen human feces, public sex, erratic behavior and everything that comes with serious drug use,” said Franssen Keenan, whose son is in 7th grade. “We see it every day, deals for illegal drugs on Bond Street right there every day on the way to school children. It’s just such a dangerous situation. I would say that all parents find it hard to believe that it is not immediately recognized as too great a risk.

In 2020, parents started a petition calling for the emergency shelter to be moved. It has nearly 2,000 signatures and includes feedback from affected staff, parents and community members. Parents lobbied politicians at different levels, including city council, school trustees and the provincial government.

Parents note that there are four other drinking sites within 500 meters of the school. Franssen Keenan has also written to outgoing Ontario Health Minister Christine Elliot to express concern that the Bond Place site violates provincial guidelines that require proximity to schools and other drinking sites be taken into consideration. However, the program was established by the federal government and therefore circumvented provincial guidelines. To add to the problem, the federal government is considering the potential purchase of Bond Place as a permanent shelter.

Jim Hughes is the former President of Campaign Life Coalition whose office has been in the area for 40 years, until he recently moved to Hamilton, Ontario. Campaign Life has had to manage the many challenges that come with being close to people entrenched in the streets.

The difficulty with this situation with the choir school is that it involves two vulnerable communities, Hughes said. There is a Catholic/Christian duty to support those in need as well as a duty to ensure a safe learning environment for students.

“Obviously you have to support those in need, but as a parent or teacher they also have a responsibility to keep students safe,” Hughes said. “People should work very hard to make the changes necessary to ensure the proper safety and protection of students. It’s terrible that all these things happen these days, but they do.

The school board implemented a security or card-based access system to monitor entry to its buildings and prevent unauthorized persons from gaining access, and the school hired an additional security guard.

“We recognize that some of the reported incidents are concerning. For this reason, the TCDSB is working closely with our partners in the City of Toronto and the Toronto Police Service to address any concerns that may affect the safety of staff and students at the school,” wrote the TCDSB in a statement.

David Reycraft, director of housing services at Dixon Hall, which runs Bond Place, said the challenges of running a shelter near a school were ongoing. The group has worked with the homeless community for decades and those living in poverty and has received a lot of support from the faith community. A Community Liaison Committee meets regularly to address community needs and provide a platform to voice concerns.

The city has talked about hotel shelters as temporary programs, but that doesn’t mean it will be for everyone, says Reycraft, who also isn’t sure if Bond Place will become permanent. The central problem, he says, is the housing crisis in the city.

“It’s a complicated reality, especially when we’re talking about proximity to schools and the religious community,” Reycraft said. “I think we’ve come to a kind of common understanding and in some ways things have improved.”