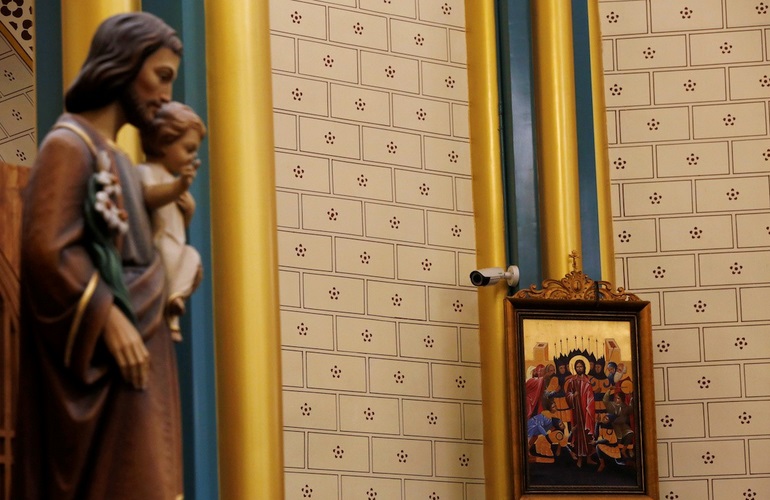 Chinese authorities have started issuing licenses for online religious services in accordance with the “Measures for the Administration of Internet Religious Information Service” which was jointly adopted by the Ministry of State Security and other agencies last year.

A surveillance camera seen near a religious painting during mass at Xishiku Cathedral, a state-sanctioned Catholic church, on Christmas Eve in Beijing, China, December 24, 2019. (Photo by Florence Lo/ Reuters)

BEIJING: Chinese authorities have started issuing licenses for online religious services in accordance with the “Measures for the Administration of Internet Religious Information Service” which was jointly adopted by the Ministry of State Security and other agencies last year.

The ban on unauthorized online religious activity went into effect on March 1, cutting off many house churches from a “crucial resource in their ability to preach the gospel,” according to the International Christian Concern (ICC) group.

Religious groups seeking to conduct online activities, such as streaming or publishing sermons, must first obtain a religious information service license on the Internet.

Organizations or individuals are also prohibited from fundraising online “in the name of religion.”

Several provinces announced that they were already enforcing the ban and requiring permits to hold religious services.

In Jiangsu and Zhejiang provinces, the Ethnic and Religious Affairs Committee said any person or organization that intends to engage in online religious services must apply for a permit.

The notice indicates that the committee will make a decision to approve or deny the application within 20 days.

“The relevant formalities shall be processed in accordance with the relevant provisions of the Measures for the Administration of Religious Information Services on the Internet within 6 months from the effective date,” said notices issued in several provinces the last week.

The ICC earlier said the measures “represent a direct attack on much of China’s informal and unregulated religious activity.”

He said many house churches in China operate outside of sanctioned religious organizations commissioned by the Chinese government’s SARA, either the Three Self-Patriots Movement (TSPM) or the Chinese Catholic Patriotic Association (CPA).

Christian churches that operate outside of these organizations have been severely harassed by Chinese authorities, the ICC said.

He said religious activity online will now be more closely monitored by Chinese authorities, which will make operating a house church or an unsanctioned church “much more dangerous”.

The group said the measures “will also impact state-sanctioned churches, as their authorized status puts them at the forefront of government surveillance online.”

“This is extremely concerning given the already strict guidelines that religious clergy must follow, including the promotion of national unity, love of country and love of party from the pulpit,” the ICC said.—licas.news