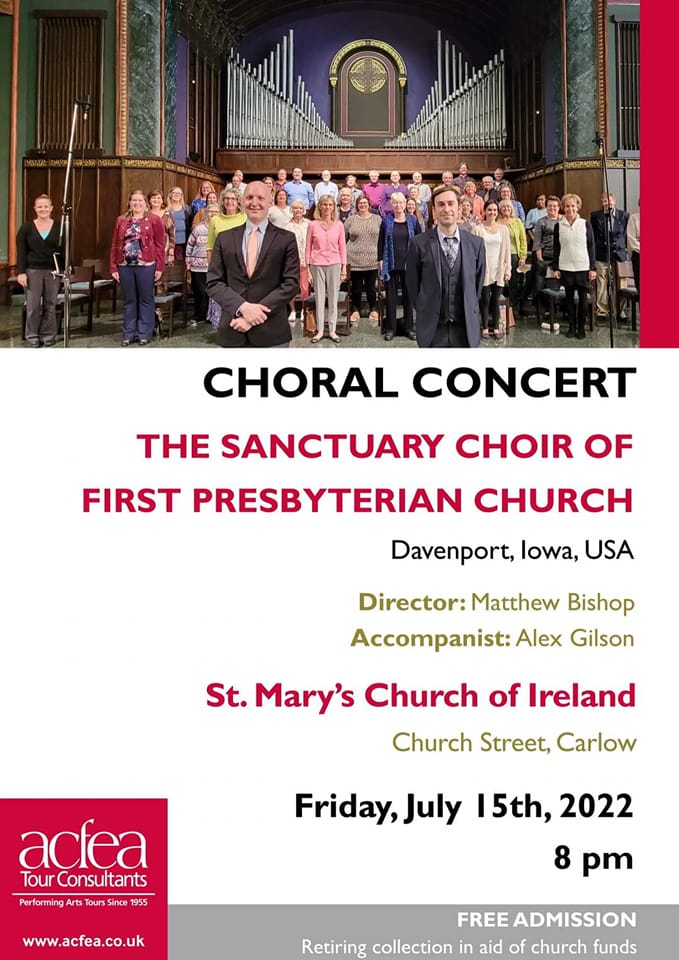 CARLOW will host one of the first adult church choirs in the American Midwest to perform this Friday as part of an ongoing connection between the city and Davenport, Iowa.

The First Presbyterian Church Sanctuary Choir of Davenport, Iowa in the United States is delighted to perform for an audience in Carlow, as Davenport has been twinned with Carlow for several years and has a long association with the town.

The concert will take place on Friday 15th July at St Mary’s Church, Haymarket at 8pm and is free.

The church’s flagship ensemble, the First Presbyterian Church Sanctuary Choir, is considered one of the premier adult church choirs in the Midwest.

The choir, under the direction of its music director Matthew Bishop, offers a variety of great choral music at two worship services on Sunday mornings from September through May, and select Sundays throughout the summer, including the annual Jazz Liturgy of the church during the Bix Jazz Festival.

The choir has a rich history of providing great music in the Quad Cities area, having performed for over two decades as part of the Quad City Symphony Orchestra’s Holiday Pops concerts and twice on national PBS television.

The Sanctuary Choir has commissioned and premiered a number of choral works and arrangements, including hymns by renowned composers, and building on their commitment to creating new music, a new commission from renowned British composer Jonathan Dove will be included in the Irish concerts.