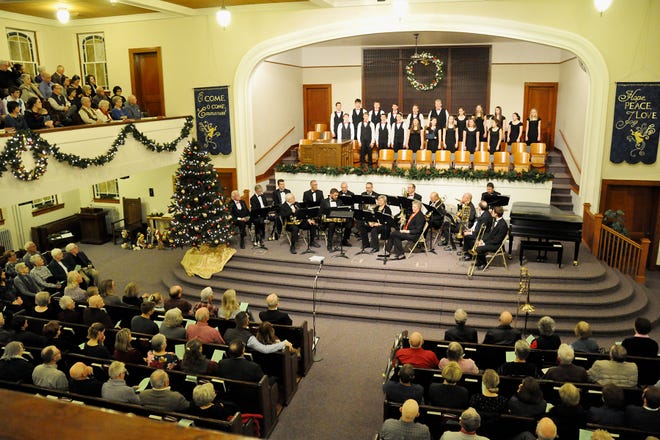 Two McPherson Community Brass Choir Christmas concerts are coming to the area – with Goessel and Peabody concerts on the schedule.

“We do it for the love of music,” said Jerry Toews, director of the McPherson Community Brass Choir. “… We’re having a great time and that’s what it is. Brass and Christmas go hand in hand. It’s so festive.”

The McPherson Community Brass Choir was founded in 1973 by Don Frederick; retired music teacher at McPherson College who was also a composer and arranger. The group is now led by Toews.

“We have a founding member who is still with us,” Toews said. “McPherson’s Winona Godfrey, plays French horn.”

The players come from all over the region. Greg Nickel, tuba; Sam Claassen, trumpet; and Dave Anderson, trombone represent Newton this season.

This year, Goessel’s concert is a little different. The concert that Toews calls “the big one” on the band’s schedule is moving to a new location – outside of Alexanderwohl Mennonite Church and high school.

“The ministerial alliance thought we had a pretty big audience, and they were concerned about that group size in Alexanderwohl Church, so we moved it to high school to accommodate social distancing,” Toews said. .

The Christmas concert will also include The Elbiata Singers, a small group of students from Goessel High School under the direction of Braden Unruh,

Toews said additional trumpets were desired for the piece written in 1889 as part of the opera-ballet Mlada. The choir is composed of four trumpets, five horns, four trombones, a euphonium, a tuba and a percussionist.

The brass choir rehearses on Monday evenings from mid-September to mid-December, and again from mid-January to the end of April.

“Christmas time is our big deal. We play a number of locations during the holidays,” Toews said. “We have a very diverse squad. Our youngest player is 28. We have players who are probably around 80, and everywhere in between. There are many of us retired. We come from all walks of life you can imagine. – from medical doctor to auto repairers Bankers, lawyers, we all have them.

During Goessel’s performance, a voluntary donation for the benefit of local ministries will be made.