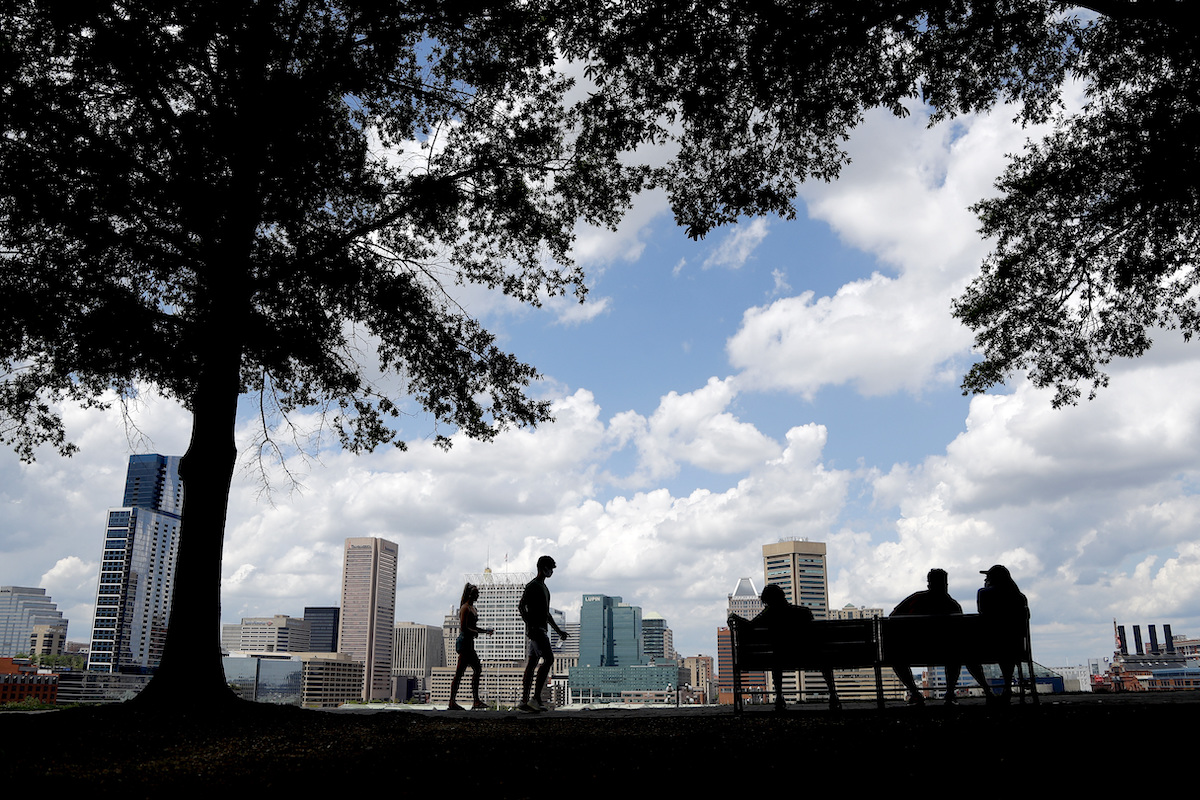 Rehabilitation community, one house at a time

Baltimore fell below 600,000 at the last census, about a third the size of Philadelphia’s population of over 1.6 million. Despite Philly’s larger size, both cities fund and staff their respective historical commissions at a similar level.

Given that Philadelphia is a larger city, it’s no surprise that Baltimore is able to protect proportionately more of its structures: 6.5% of its buildings are for preservation versus 2.2% of Philly’s stock.

But this bird’s-eye view shows just how many buildings are protected from easy demolition. To truly save and renovate these structures requires craftsmen like Wittenberg and an array of preservation-friendly programs like those Baltimore has developed over the past few decades.

Local politics are especially important because there is little neighborhood conservatives can count on at the federal or state level. National Historic Rehabilitation Tax Credits apply only to revenue-generating projects. This means that they cannot be applied to owner-occupied properties. The National Register of Historic Places offers no protection against demolition.

At the state level, Maryland offers more than Pennsylvania. Up to $5 million can be split annually across the entire Keystone State of 13 million — again, just among income-producing properties. With less than half the population, Maryland’s $7.5 million to $10 million per year tax credit goes further. Still, it has shrunk considerably from the years when it existed without a cap: as much as $98 million per year was taken from the grant in 2003. Unlike Pennsylvania, Maryland also offers a rehabilitation tax credit historic owner-occupied properties.

Unlike Philadelphia, which gives no direct financial benefit to those whose properties are subject to preservation regulations, Baltimore offers a financial break to those who own historically designated properties. The Baltimore Local Preservation Tax Credit is the biggest building saver in the city, especially after the decline of the credit at the state level. Created in 1996, it has prompted rehabilitation and reuse of more than 3,500 old buildings.

“Preservation is at the heart of Baltimore because historic incentives are Baltimore’s main financial incentives,” said Charlie Duff, a longtime resident involved in preservation since the 1960s.

Baltimore’s tax credit program provides full tax relief for 10 years on the value of any historic property rehabilitation. This means that if a $100,000 house has $200,000 worth of work done, the owner still only pays taxes on its original value before the rehabilitation.

“They [local tax credits] were absolutely essential to start the market,” Duff said. “They are very, very, very important. Especially when we’re trying to rebuild neighborhoods that have lots of vacancies and weak housing markets.

The stereotype of advocacy for preservation is that it is for the wealthy or reserved for monumental buildings. But practitioners like Duff argue that in Baltimore, preservation as public policy is framed in a broader way.

Yet Baltimore’s preservation policies remain largely unused in its poorest communities, where wholesale demolition is the norm. City leaders have historically focused their limited resources on so-called “midtowns,” where vacancy is more of an emergent issue and there is enough market activity to justify repair expenditures.

Preservation to stabilize a neighborhood

East Baltimore’s Oliver neighborhood is one place where preservation has become an essential tool in the fight against vacancy. It’s a few blocks north of the sprawling Johns Hopkins Medical Center, but well beyond the neighborhoods that have seen the most redevelopment activity. Once full of vacant homes, this predominantly African-American neighborhood has seen the void in its ranks largely filled over the past decade.

That’s because Oliver became the poster child for “Vacancies to be Valued” (V2V), a 2010 initiative championed by then-Mayor Stephanie Rawlings-Blake. The program covers a range of policies, from more aggressive monitoring of derelict property owners to homeowner assistance programs.

The program works by identifying vacant buildings in neighborhoods like Oliver, then targeting owners with citations and fines until they repair their properties. If they refuse or do not respond, the city places the property in receivership. A municipal court then appoints a nonprofit trustee to sell the vacant home to a developer for rehabilitation and resale. (There is no demolition protection, but these buildings are mostly located in colder markets, so that hasn’t been a problem.) Sale proceeds go to the original owner.

Once several dozen properties are amassed this way, they are put up for auction where eligible developers can bid on them. (They must first prove they don’t owe back taxes, have no code violations on their other properties, and have access to the capital needed to renovate the home.) The Vacants To Value program has brought nearly 3,000 vacant properties returned to service since its creation 12 years ago.

“If you think about how most blocks have divestment issues, not every house in the block is abandoned,” said Sean Closkey, president of Rebuild Metro, a community reinvestment organization based in the city. Oliver’s neighborhood. “When you go in and insert a historic rehabilitation, you create the best homes on the block that were once the worst homes.”

Vacants To Value is also offering $10,000 in closing costs and down payment for those who want to live in the rehabilitated homes. This underscores the program’s focus on “midtowns,” where the city hopes to stem the blight. In many of Baltimore’s most deprived communities, vacant homes are rarely rehabilitated. If they are, they tend to become rental properties that cannot take advantage of this benefit.

Rebuild Metro intends to rehabilitate the one or two vacant buildings on the many blocks where developers could still be tempted to invest. The aim is to stop any further divestment and prevent possible demolition which would leave an unsightly void in the row which would further depress property values.

Oliver is one of the prides of the Vacants 2 Value program. In 2015, according to the Baltimore Sun, Rebuild Metro had obtained dozens of homes through the program, working street by street to restore blocks marked by abandonment. Since then, much of the neighborhood has been restored with the help of Vacants To Value, the local historic tax credit, and innovative use of the federal historic tax credit. In their catchment area, largely covering the Oliver neighborhood, there were over 200 vacant buildings when they began work. Now there are less than 20, says Closkey.

For Closkey, using historic preservation incentives to restore areas like Oliver is an essential aspect of neighborhood revitalization. In these communities, levels of disinvestment are so high that the cost of rehabilitating a home often exceeds its value. But most housing subsidies target low-income families, which creates affordable housing but does nothing to foster economically diverse neighborhoods like the ones Rebuild Metro wants to cultivate.

In Oliver, Closkey says preservation incentives allow for the creation of a mixed-income neighborhood without displacing longtime residents. Between 2010 and 2020, the neighborhood’s census tract population increased by 621 people (while the city overall decreased). Poverty levels have fallen over the past decade and median income has risen, but unlike some areas experiencing reinvestment, Oliver is still a majority African-American community.

“You create the revenue diversity needed to create sustainability in the marketplace,” Closkey says. “It’s becoming healthy without becoming gentrified.”