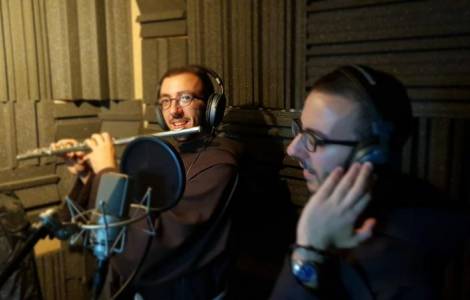 Aleppo (Agenzia Fides) – Johnny and George Jallouf are twin brothers, and they are also brothers and students in the Custody of the Holy Land. They were born 25 years ago in Aleppo, and in this Syrian metropolis, martyred during the war years, they also lived together the beginning of the religious vocation which led them both to follow in the footsteps of Saint Francis of ‘Seated. From now on, their passion for the Saint and their concern for the care of liturgical celebrations have united them in a new adventure: the project of obtaining from the writings of Saint Francis a corpus of sacred hymns in Arabic, to be offered to all for the liturgy and personal prayer. The result so far is a collection of nine hymns, entitled “Rabi wa Elahi” (“My Lord and my God”), with texts in Arabic and original music, available for free on digital music platforms, including Anghami (popular in the world).
Father George explained that the idea of ​​creating liturgical chants in Arabic inspired by the writings of Saint Francis came about during his early years of Franciscan formation, when he and his brother were in Italy singing Franciscan hymns composed in Italian. The two brothers are also musicians: George studies classical guitar and singing, Johnny studies the flute and singing. Their project consists of creating Franciscan hymns with original music whose composition was entrusted to a couple of Christian musicians from Nazareth, Louai Zaher and Rabab Zaitoun. “The purpose of spreading these songs,” Brother Johnny told the online magazine custodia.org, “is to try to transmit the spirit of the Franciscan writings to the Arab world, especially to young people during meetings of formation and Franciscan themed marches”. The title of the collection, which means “My Lord and my God” in Arabic, is inspired by the phrase “My God and my everything”, pronounced by Saint Francis on Mount Verna, after receiving the stigmata.
Johnny and George, members of a Christian family from Aleppo, grew up attending the Franciscan parish in the Syrian metropolis even during the years when the entire population suffered from the trauma of war. It was in these difficult times that their vocation blossomed. The questions and the thirst for happiness that they felt growing inside them as the city seemed to descend into unimaginable violence led them to put aside their old projects (one wanted to be a doctor, the other dreamed of being a director ) and to follow the One who most strongly drew their hearts in those troubled years. (GV) (Agenzia Fides, 01/20/2022)