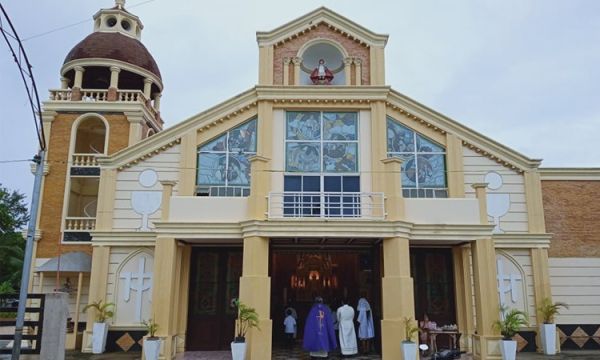 The Archdiocese of Cebu has increased the number of seats inside its churches from 50% to 75%, and it has authorized Lenten activities outside parishes, as cases of the coronavirus disease (Covid-19 ) in the provinces continued to decline.

Archbishop José Palma published Circular No. 2/22 on Tuesday, March 8, 2022, containing the general orientations for Holy Week 2022, and it was addressed to the clergy, religious and lay faithful. This year, Holy Week is celebrated from Sunday April 10 to Sunday April 17.

The circular written by the chancellor of the archdiocese Mgr. Renato Beltran Jr. says the decision to increase seating to 75% was made after consultations with local government units.

To respect this capacity, the archdiocese suggests allowing seven or eight people to sit on a bench, which can normally accommodate 10 people in pre-pandemic times.

Ushers and parish ushers may be called upon “to guide worshipers to available seats and, if necessary, will call the attention of those who may have become overcrowded in a particular pew,” the circular said.

Unlike 2021 when the commemorations of Holy Week were confined to churches, this year the holding of traditional processions on foot and Via Crucis (Way of the Cross) along the highways and Visita Iglesia (visit of seven churches) will be authorized but these activities and the “Processional routes should be coordinated with the “civil authorities, the police and other groups who regularly attend” the parishes.

However, the Archdiocese prohibits Andas (a parade of religious icons) as people must wear the icons.

“The route of the procession will take into consideration the width of the street or roads, so it is best to limit the route to routes that allow our worshipers to maintain their physical distance. Parish procession marshals and those delegated by local government will monitor and maintain social distancing from those participating in the processions,” the Archdiocese said.

Other reminders in the circular indicate that parishes should always coordinate with local governments and the constant sanitation of churches.

“As already practiced, we must disinfect our respective churches after liturgical celebrations and provide alcohol for the sanitation of our faithful attending the activities,” the circular reads. (KAL)