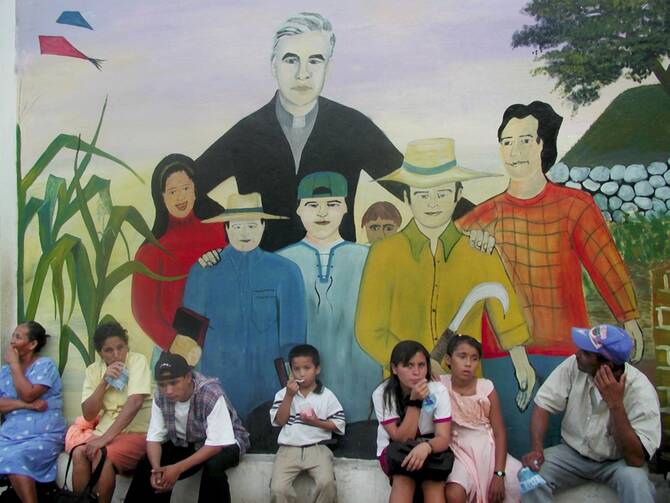 Rutilio Grande, SJ, and his two traveling companions, Nelson Rutilio Lemus, 15, and Manuel Solórzano, 72, were driving to the small town of El Paisnal in El Salvador to celebrate the novena for the patronal feast of the city. of Saint-Joseph when they were shot on the road March 12, 1977, in Aguilares, El Salvador. Decades after the murders, the Vatican announced on February 22, 2021 that it would recognize the three as martyrs.

What specifically can we learn from how Rutilio Grande, SJ, lived his life? What might that inspire us to do with our own lives?

What exactly can we learn from the way he lived his life? What might that inspire us to do with our own lives? Father Grande’s personal contributions to the poor of his beloved country, his commitment to the Church and the Jesuit community, his love for the people he generously served, his love for his many friends and family all resonate in the commitment that led to his martyrdom.

1) The value of a life is not determined by its net worth.

Rutilio Grande was born on July 5, 1928 in the poor hamlet of El Paisnal, El Salvador. Her childhood was marked not only by poverty but also by the trauma of separation from her parents and the death of her mother. His death and the absence of his father left his five older brothers struggling to provide economic support for young Rutilio and his paternal grandmother. Despite the difficulties, Rutilio never lost sight of his humble beginnings nor forgot the religiosity taught to him by his grandmother: the faith of a people. The simple joys of interacting with the people of the city and being part of the religious and cultural festivities stayed with him throughout his life. He was proud to be Salvadoran. As an adult, Rutilio often described her mixed-race identity as a “coffee with leche», a mixture of coffee with milk.

As he always behaved with dignity, he demonstrated that being born in poverty does not determine the value of a person. From personal experience, he understood not only the suffering of the poor, but also the hopes and aspirations they had for themselves and their families. This deeply personal story became fundamental to his priestly ministry. This shaped his teaching of the Gospel and resonated in his adherence to the teachings of the Second Vatican Council. Although Father Grande’s priestly formation took place before Vatican II, his spirit captured his ministerial imagination.

2) Holiness is found in everyday life.

For several periods early in his priestly life, Father Grande was assigned to ministry at the Seminary of San José de la Montaña in San Salvador. Encouraged by his studies at Lumen Vitae, a renowned catechetical and pastoral institute in Brussels, Father Grande transformed the traditional formation of the seminary by following the directives of Vatican II. He deeply believed that future priests should come into direct contact with the realities that people lived. To increase the pastoral sensitivity of the seminarians, he organized trips for them to visit the families of the surrounding towns. There, the young men had the opportunity to experience for themselves how ordinary men and women lived.

Later, as pastor of the parish of Our Lord of Mercy in the town of Aguilares, Father Grande led a team of Jesuits in an innovative ministry, similar in spirit to that which he had created for seminarians. diocesan. His visionary pastoral innovations included a collaborative team approach and a preferential option to minister in rural areas among peasant workers. The purpose of pastoral activity was to evangelize men and women who, over time, would become actors in their own human destiny. In this, Father Grande’s vision echoed the first words of Vatican II’s “Pastoral Constitution on the Church in the Modern World”: “The joys and hopes, the sorrows and anxieties of people of this age, in especially those who are poor or afflicted in any way, these are the joys and hopes, sorrows and anguishes of the followers of Christ.

Rutilio Grande often said that God was not in the clouds, but rather firmly present on earth in people’s lives.

His humble beginnings sustained and nurtured his zeal for this new vision. Despite the many higher education opportunities he had as a Jesuit, he never strayed from the city or the people who shaped his life. Even long after his death, people remembered Father Grande’s humanity and how he showed them a new example of priesthood. He often said that God was not in the clouds, but rather firmly present on earth in people’s lives. In fact, Father Grande’s pastoral approach paved the way for the creation of a new model of church in El Salvador.

3) We all have a missionary call.

Just as Father Grande had previously taken an innovative approach to the formation of seminarians, when he was assigned to the parish of Aguilares, he invested his energies and efforts in new approaches to lay formation. Sometimes he would say, “Now we’re not going to wait for missionaries from outside. On the contrary, we must be our own missionaries. In this effort, the young pastor and his fellow Jesuits began visiting people in rural areas and cities. Over time, their personal approach attracted people to the celebration of the Eucharist, the sacraments and the study of the Bible, resulting in a vibrant community of Christians who were actively engaged in parish life.

Father Grande’s ministerial approach was so effective that within a year he had 362 “delegates of the Word” participating in parish evangelization efforts. Some lay people, men and women, actively joined the Jesuit team to collaborate in updating the pastoral plan of the parish; others took on pastoral duties that suited their newly discovered talents and skills. Aguilares’ method of evangelism bore much fruit, and the gospel resulted in the formation of committed Christians.

Gradually, as men and women with little schooling reflected on the gospel, they began to question the injustices they were experiencing.

Gradually, as men and women with little schooling reflected on the gospel, they began to question the injustices they were experiencing. The campesinos discovered the liberating spirit of the Word of God and learned to integrate it into their lives. Newly enlightened, the people sought ways to organize themselves to claim what was rightfully theirs. Father Grande did not discourage them; rather, he continued to sensitize them to the message of the gospel and the truth that God had not destined people to live in poverty.

At the same time, he was clear in his understanding of his priestly ministry. He often told people, “I don’t belong to one political party or another. What I do is preach the Gospel. But as people better understood their rights as human beings, they began to look for ways to secure those rights. It was inevitable that they would engage politically.

Along with the formation of the laity, Father Rutilio paid particular attention to a liturgy transformed by the spirit and directives of Vatican II. Her childhood involvement in popular religiosity in her hometown of El Paisnal gave her great insight and respect for how faith was lived by ordinary people. He felt that popular practices that the clergy had previously rejected as mistaken forms of religiosity should be recognized as authentic expressions of faith. In fact, Father Grande insisted that the popular religiosity of ordinary people be honored and respected and maintained as a central part of the parish pastoral plan.

Rutilio Grande often said to people, “I don’t belong to one political party or another. What I do is preach the Gospel.

For him, prayer, popular expressions of faith and the liturgy were an integral part of the real life of the Salvadoran people. Therefore, he guided people in reclaiming the values ​​inherent in their cultural devotions and celebrations. Having taught courses on the constitution of the Republic of El Salvador at the minor seminary, he often incorporated this material into his sermons and Eucharistic celebrations, linking constitutional rights to the message of the Gospel. He understood that the history of salvation in the context of the modern world required that prayer and good works be integrated. All of these pastoral efforts inspired by Vatican II paved the way for the creation of a new way of being Church in the contemporary realities of El Salvador.

Amid celebrations of Father Grande’s beatification, those who knew him in life consider that among Rutilio Grande’s many contributions to the church in El Salvador, the most notable was his work to align the church on the real life of the people. But we are also led to reflect on another contribution he made: to show us what it means to be a saint, to be a saint in the modern world. Early in his life, Father Grande had suffered a catatonic episode from which he gradually recovered, but which had lasting effects on his health. Few people knew how fragile his health was as an adult, when he faced continuous bouts of depression and self-doubt.

His superiors in the Society of Jesus note in his personal file: “At the beginning of his religious life, he showed a distinct nervous weakness…. He had psychological breakdowns and there were fears for his mental health…. He was aware of this limitation, suffered from it, but he didn’t let it control him. He accepted it. He worked to dominate it and he overcame it. Father Grande learned to live with his condition by putting his complete trust in God and taking steps to help himself. Every day until his death, he simply placed himself in the hands of God.

Even in his fragility – or perhaps through it – this beautiful son of El Salvador has accomplished great things for the universal Church, the Church in Latin America and especially the Church in El Salvador, living and giving his life for faith. His fragility may have been a difficult cross to bear, but it brings to light the beauty of his holiness, his holiness.

In the last moments of his life, Father Grande gave himself up completely as a faithful son of El Paisnal and of the Church, saying: “God’s will be done”. Just as the people of El Salvador will celebrate the beatification of one of their own on January 22, their beloved “Father Tilo”, let us join them in shouting “Here !”