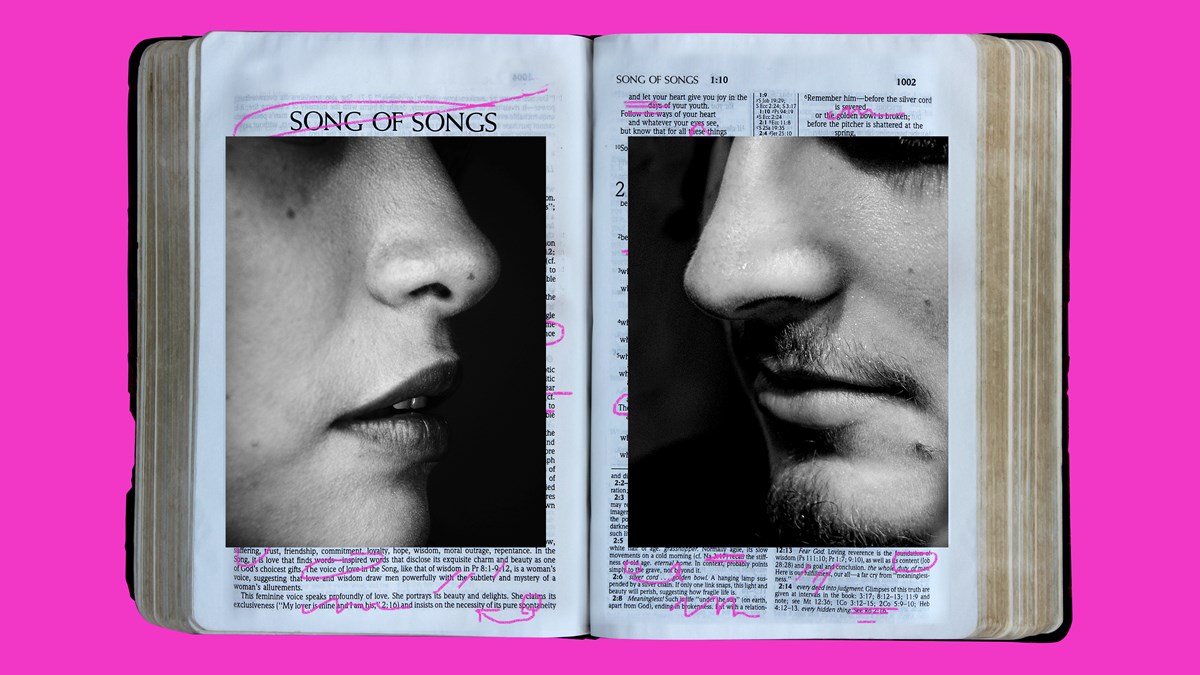 SOutside a Coptic church in Cairo, I saw a mosaic that sent me back to a hermeneutics course at university. In the foreground of the image, a man lay asleep as an angel hovered above him, pointing. I followed with my finger a horizon dotted with pyramids. And I recognized the second Bible story, “Joseph and Egypt,” which tells of the Holy Family’s flight from Herod’s persecution.

The image reminded me of how I had struggled with a passage from the Gospel of Matthew: “I called my son out of Egypt” (2:15). The passage suggested that when the infant Jesus returned from the land of the pyramids, he had “fulfilled”, in the words of Matthew, a vision of the prophet Hosea: “When Israel was a child I loved him, and out of Egypt I have called my son” (11:1). Yet Hosea, for his part, made no prediction about the coming of the Messiah. He thought back to an event he knew about in the history of Israel: God’s deliverance of his people from the yoke of Pharaoh.

For years I struggled to see how the return of the holy family from Egypt truly fulfilled Hosea’s prophecy. But then my hermeneutics teacher explained that Matthew used “realized” to mean something closer to “embodied” or “full of meaning.” In modern parlance, we could imagine Matthew saying, “Talk about calling your Son out of Egypt!

When we try to fit a prediction into our reading of Hosea’s vision, my teacher said, we end up twisting it. Instead, he argued, we should treat Matthew’s language choice as an exercise in literary stratification. In other words, he relied on prior biblical motives to amplify his point.

I often thought of this conference while reading Aimee Byrd’s new book Sexual Reform: Restoring the Dignity and Personality of Man and Woman. Byrd is probably best known for an earlier book, Recovering from Biblical Manhood and Womanhood, which has raised many questions about how evangelicals talk about manhood and womanhood within the church. In this latest version, she diagnoses the church’s mishandling of human sexuality and points to a solution in Scripture. But its interpretative framework is questionable.

To sum up Byrd’s argument: we allowed conceptions of gender to emerge from the teachings of certain church fathers who were more rooted in Aristotle than in Genesis. We have retained June Cleaver as the ideal woman rather than that of Proverbs 31, who does real estate transactions (v. 16) amidst other “vigorous” tasks (v. 17). When we have stood firm on the truth, we have often sacrificed grace. Or vice versa. And we’ve barred the front door to feminism while leaving the back door wide open to the kind of misogyny that resulted in the #MeToo and #ChurchToo movements.

Byrd’s proposed solution is to examine Song of Songs through a specific interpretative lens. She sees the Song as revealing a “typology in God’s conception of male and female, a typology that unfolds throughout the canon of Scripture”. She describes this approach as a “Christian” reading of the Song, meaning to seek its “divine authorial intent” rather than its human authorial intent.

Throughout her book, Byrd shows how she prefers this method over a variety of alternative approaches. For centuries, rabbis have seen it as an allegory of love between God and Israel. The early church read it as an allegory of the relationship between Christ and the church. More recently, many scholars have taken it literally as poetry that exalts human love as a gift from God.

Responding to this later interpretation, Byrd warns, “We can’t catch the song off guard as a horizontal manual of love and sex” and “We can’t catch our sexuality off guard under the weight of cultural convention”. And she’s right that the song is much more than a guide to good marital sex. Indeed, while some have seen the Song as a chronological guide through courtship, love, and marriage, such an understanding has problems beyond faulty methods of interpreting the Bible. Courtship, for one thing, was virtually non-existent at the time the song was written (or its poetry collected). And a chronological reading misses some of the distinctive elements of Hebrew literary structure, which was not bound by the kind of beginning-middle-end conventions that would exist only hundreds of years later.

Many will agree with Byrd’s assessment that the church needs to reform its understanding of God’s purpose for men and women. But the path she takes from problem to solution is another story. Unfortunately, the typological method of interpreting Byrd’s Song of Songs leads her to conclusions that run counter to the basic rules of word usage.

Describing the bride in the song, Byrd points out that she has “dove eyes” (1:15), an image the wife applies to her husband later in the book (5:12). Noting that the bride “finds peace” in her lover’s eyes (8:10), she argues, “The dove is clearly a symbol of the Holy Spirit.” Clearly?

Yet neither of these interpretations is as straightforward as Byrd suggests. On what basis of authority does it make them? Readers never get a straight answer. “The question of authorial intent,” argues Byrd, “is not given to us. It is a song. … So why would we spend our energies probing this when the typo-symbolic reading is the simplest reading? Which only begs the question: Clearer for whom?

At one point Byrd notes a parallel between the king in the Song being bound by the hair of the beloved (7:5) and Jesus being bound when arrested, as reported by John (18:24) . Now, in this example, the author of the fourth Gospel uses literary stratification because he borrows words and images from the Song. But seeing the bound Savior in the original reference to the bride’s hair? It reminds me of the oft-quoted scene in one of the Alice in Wonderland books, in which Humpty Dumpty tells Alice that when he uses a word, “it means exactly what I choose it to mean – neither more or less”. In response, Alice wonders aloud “if you can make the words mean so many different things”.

Byrd cautions against misguided interpreters who “read with modern metaphysical and critical methods, believing they are faithful to the plain meaning of the text”. She suggests that their “good intentions did not take into account the providence of God in divine fatherhood”. But isn’t allowing words to have so many meanings too much to depend on the human imagination?

It is true that in exalting sexual love, the Song points to the good gift of God’s physicality. We know from Paul in Ephesians 5 that marriage is a picture of Christ and the church, and from Revelation 19 that a great marriage awaits the church, which is the bride of Christ. So in human love and consummation we see the future of redeemed humanity foreshadowed.

But we can only make this connection with confidence because the future event remains rooted in the meaning of the previous one, which has its own meaning in its original context. After all, what sense has a “fuller” truth without an original sense of its own on which to build an analogy?

In Sexual Reform, Byrd correctly diagnosed. ‘Cause the church’s got a problem, and a lot of wrong roads has led us where we are. Byrd’s prescription is to turn to the Bible for help. And on that we can agree. She notes, “As important as these issues are, we address the symptoms without getting to the root: why our desires are created, where our desires should be directed, what is the meaning of our sex and why we live. “Yes, and amen.

Byrd is also on firmer ground when she makes observations from the text of the Song of Songs itself without seeking to interpret it. For example, she notes, “The woman’s voice is so free in the Song. Surprisingly, in its patriarchal context, the female voice is dominant. … He shamelessly starts the song and closes us. Female vocals make up over 60% of the song. And yet, I’m less interested in the quantity, but in the freedom, the boldness, the playfulness, the intensity and the truth of what the bride says. She initiates again and again, starting at the beginning, declaring her desire for kisses from her groom’s mouth. Observations like these can help the church reform because they help readers see new possibilities for talking about men and women, love, marriage and sex.

Most Byrd readers will approve of his call for a small-r sexual reform and recognize that the Bible is the place to look for help. But when it comes to how we understand scriptural counsel, I suspect most readers will find themselves on a different path. Because before one can do something like make an analogy based on Egypt, such a place with sand and pyramids has to actually exist.

Sandra Glahn is a professor at Dallas Theological Seminary. She is the editor-in-chief of Sanctified Sexuality: Valuing Sex in an Oversexed World and Justifying the Vixens: Revisiting the Sexualized, Reviled, and Marginalized Women of the Bible.