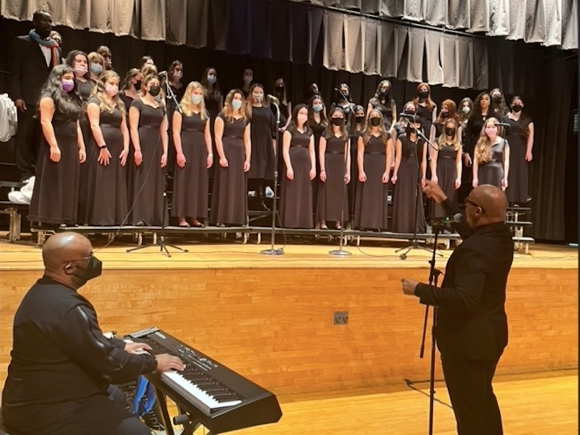 Students at Ursuline School of New Rochelle had the chance to get a hands-on lesson for Black History Month when they presented Gospel spirituals at school as part of a special program. The school honor choir performed Gospel spirituals under the direction of La Fredrick Coaxner, the choir director of Harlem’s famous Abyssinian Baptist Church.

Coaxner had worked with the students for several weeks teaching them well-known and more obscure spirituals, including “Lift Every Voice and Sing”, “Steal Away”, and “Ain’t Gonna Let Nobody Turn Me Around”.

The girls’ choir director, Wendy Bryn Harmer, a soprano from the Metropolitan Opera, added a special touch with her ethereal voice. Students also had the opportunity to perform with Damon Mack on keyboard, vocalist Carl Arnez Ellis III and soloist Ahmaya Knoelle Higginson.

Coaxner explained the origins of the songs, which he called “freedom songs” or “code songs”. The spirituals, which slaves used to communicate with each other when they were about to flee, are as historic as they are enchanting.

“I was a little nervous at first how receptive they would be, but we were rehearsing one day and all of a sudden an energy came into the room and it was like we were on a ward. Baptist cleric,” Coaxner told CBS. News WCBS affiliate in New York after the performance.

“There was definitely an energy. I think it was really fun,” Ursuline honor choir member Madeline Donovan quickly agreed.

The performance was the finale of a special presentation by Justice Tanya R. Kennedy, who last July was appointed Associate Justice of the Court of Appeals by Governor Andrew Cuomo. In her speech to students, “Young, Gifted and Black,” she spoke about unrecognized black women in history.

The Black History performance was curated by Tamisha Chestnut, who was recently appointed as the Schools Director of Diversity, Equity and Inclusion.