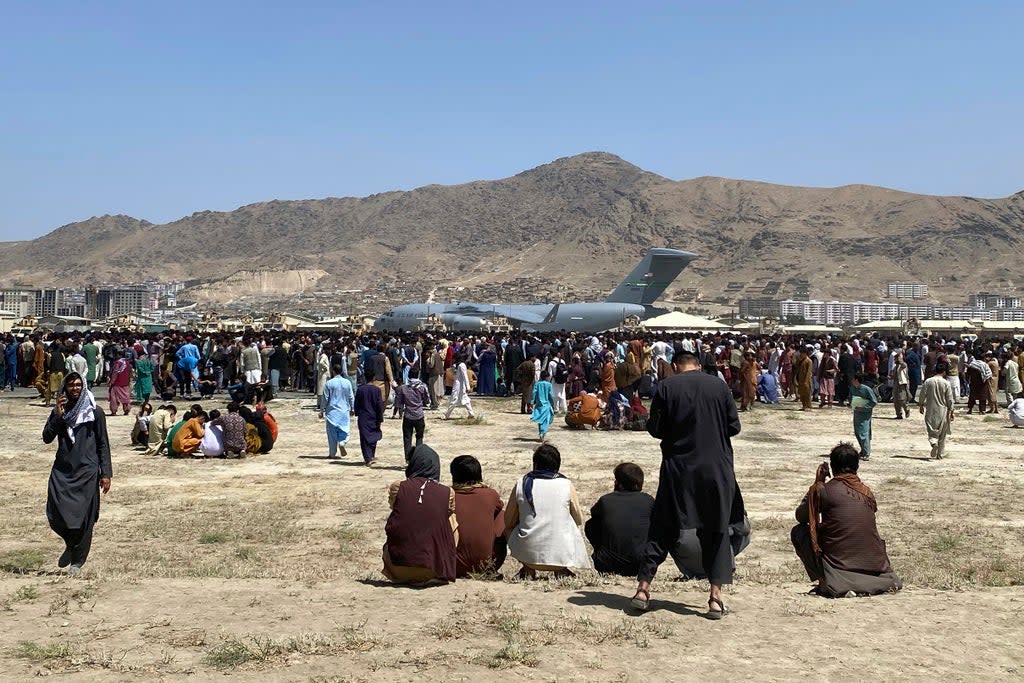 The year saw the Western withdrawal of Afghanistan with enormous impetus to international jihad as one of its consequences, as post-Brexit “Britain” seeks to re-establish military and political footprints, among others, in the Middle East and South Asia.

A number of books came out during this turbulent time. Of these, three, on Afghanistan and the Middle East, by authors with deep knowledge and expertise in their subjects, are very helpful in understanding how we got here.

Theaters of conflict are expected to shift to Eastern Europe next year, with Russian forces regrouping on the Ukrainian border and in East Asia where aggressive China threatens to invade Taiwan. Both of those clashes, and what might unfold, were influenced by messages carried by allies and opponents of Joe Biden’s Afghan retreat.

One of the books on Afghanistan – The Ledger: Accounting for Failures in Afghanistan – is David Kilcullen, a former Australian soldier and Greg Mills, a South African scholar. The other – The Long War: The Internal History of America and Afghanistan Since September 11 – is by David Loyn, the former BBC journalist who for years covered Afghanistan, among many other countries around the world. The third book – Soldier in the sand: a personal story Story of the modern Middle East (now available in paperback) is from Lieutenant General Sir Simon Mayall, who had served extensively in the Middle East and was the senior adviser for the region at the Department of Defense.

Kilcullen, who has been deployed to Iraq, Afghanistan and East Timor, had served as a counterinsurgency advisor to Condoleezza Rice when she was US Secretary of State, and to US General David Petraeus in Iraq. Kilcullen first rose to prominence over ten years ago with another book, “The Accidental Guerilla”. His thesis was that America approached the conflicts in Iraq and Afghanistan with a mindset shaped by World War II and failed to take into account the changing nature of conflict and the advent of Hybrid War.

Counterinsurgency doctrine, according to Kilcullen, should be people-centered, protecting urban centers of operations rather than chasing the enemy into distant locations. He also believes that the West lacks understanding the nuances of Islamist militancy, does not understand the different motivations and objectives of the fighters, with the inability to conduct negotiations at opportune times, one of the results.

Writing in their new book Kilcullen and Mills, who was an adviser to Ashraf Ghani, the president who fled when the Taliban took Kabul, argue that until the end, too few lessons were learned too late. The government that emerged in Kabul after the overthrow of the Taliban in 2001 was simply not broad enough in its representation. Tribes and clans were not brought into the fold, and the Taliban, who were receptive to dialogue at the time, were looked down upon and viewed as a perpetual enemy.

Senior officials in the administration of George W Bush were responsible for this state of affairs. In 2004, Donald Rumsfeld, then US Secretary of Defense, told me and another journalist in the town of Mazar-e-Sharif, in northern Afghanistan, that “the Taliban are over, they are over. have no role to play in the future of Afghanistan ”. Rumsfeld was one of the key figures in the Bush administration that had instigated the invasion of Iraq the previous year, transferring resources vital to this disastrous war from Afghanistan, creating a security vacuum that the Taliban and the Haqqani Network, fed and watered in Pakistan with their sponsors in the military and intelligence services, have returned across the border to exploit.

Focusing on the defense of urban centers was already in practice under General Sir David Richards, British General Sir David Richards, when he was in charge of the International Security Assistance Force (ISAF). I saw it still in operation by Afghan government forces last summer as it covered the conflict that ended with the Taliban takeover of Afghanistan. One of the main reasons the strategy failed is that Afghan troops were not supplied after the US withdrawal.

Rumsfeld comes under scrutiny in The Long War in which David Loyn points to the Defense Secretary’s lack of long-term vision and his insistence on a “light footprint”, which meant there was a insufficient number of troops for necessary tasks. There were never enough boots on the ground to put in the areas from which the talibés had fled, whereas not capturing or killing Osama bin Laden in Tora Bora, allowing him to escape to Pakistan, was a great propaganda triumph for the jihadists. After all, it was the September 11 attacks and the Taliban’s refusal to hand over the al-Qaeda leader to the United States that was the main reason for the Afghan expedition.

Loyn’s book shows how the Taliban were replaced by warlords, often corrupt, often involved in the opium trade, often oppressors of the local population who became partners with the West. Rumsfeld, when he met us in Mazar, had gone to see Abdul Rashid Dostum, a notorious warlord.

These strongmen may have fought the Talibs, but they also used the Western military to settle tribal or personal scores. I remember in 2002 how American airstrikes wiped out large groups of people, some at social gatherings like weddings, after Americans found out they were insurgents.

It was also the partnership with local militias that contributed to some of the military failures, such as the escape of bin Laden. The Americans and the British never fully understood the Afghan dynamic, the links, at times, with supposed enemies, under which these armed groups operated.

Loyn’s work is divided into five different segments – the 2001 invasion; the fighting that started in 2006; the “surges” under Petraeus and McChrystal; the state of the conflict after the end of Isaf’s combat operations and this year’s final defeat. The book seeks to expand and succeeds primarily with Loyn’s in-depth knowledge of Afghanistan. He had access to many senior officers and civilian leaders, Western and Afghan, and that helps fill in the inner details of what happened, failures and successes; common goal and confrontations.

Some of the commanders’ labeling may have been arbitrary and perhaps unfair. Loyn says, for example, that US General Dan McNeill didn’t like being called “Bomber McNeill”. The nickname, I think I remember, was devised one afternoon at ISAF headquarters in Kabul after a truce with the Taliban organized by the outgoing commander, General Richards, was effectively sabotaged by a US officer calling for airstrikes against the Taliban. It was just as General McNeill was about to take over and was seen as an example of the American perspective that agreements like Musa Qala’s were naive and doomed.

As Britain seeks to expand its influence far and wide, policymakers in Whitehall would do well to listen to Simon Mayall, who was one of the key figures behind David Cameron who began the process of returning east to Suez with the establishment of a naval base in Bahrain.

Mayall was the right man for the role, someone with not only professional knowledge but also a deep personal knowledge of the Middle East, having spent most of his childhood there before much of his successful career. 40 years in the region. A brief summary of Mayall’s father’s military life provides an overview of changing circumstances in the military. By 1948 he had joined the new RAF regiment, which numbered 66,000 men, tasked with protecting the chain of British air bases around the world. The total strength of the British Army will be 72,500 in four years.

Mayall joined the Army rather than the RAF and participated in all major chapters of the British engagement in the Middle East over the following decades. He fought in both Iraq wars and was also seconded to the Omani armed forces for three years. The general’s role as adviser for the Middle East to the defense ministry came during the Libyan intervention and the Arab Spring. In addition to degrees from Balliol, Oxford, he studied at St Anthony’s, Oxford, where he wrote a book on Turkish security policy.

Mayall has a soldier’s gaze on conflicts: but he also sees the political dimensions unfolding that drive them. He also correctly distinguishes between the Afghan operation, which followed the September 11 attack organized by Bin Laden of Taliban-led Afghanistan and the invasion of Iraq which, he admits, had “as much to do with it. to see with the internal political dynamics of the United States as it had done with the declared casus belli regarding WMD and Saddam Hussein’s ties to al Qaeda.

Those of us who reported from Iraq in the run-up to the invasion were only too well aware of this. We accompanied the UN inspection teams as they searched for the mythical WMDs, but back in the UK and visiting the US between stays in Iraq, it became evident that George W Bush, with Tony Blair a staunch disciple, was determined to go to war.

Mayall can also see the result of America’s overconfidence and the misconception of what can happen during the occupation. The image of President Bush aboard the aircraft carrier USS Abraham Lincoln on May 1 declaring ‘Major Combat Operations’ with a ‘Mission Accomplished’ banner behind him would haunt him and others as Iraq was sinking into chaos … ”he writes. It was chaos that he and his fellow commanders faced.

But Mayall’s book is more than just a military story. It is a mixture of history, politics and analysis enriched by personal experience that seeks to explain the complex mosaic of a highly volatile region. He remains fascinated by this remarkable corner of the globe ”, having“ seen it in its glorious, happy and hospitable best, and in its worst murderer and sectarian ”.

Mayall’s belief in the geopolitical importance of the Middle East led him to encourage and support the British government’s decision to open a naval base in Bahrain. The strategic importance of this could be seen in the tensions in the Gulf which had led to a series of serious incidents, including the seizure of a British tanker by Iran.

There will be a lot of such dramas played out there in the future.

‘The Ledger: Accounting for Failure in Afghanistan’ by David Kilcullen and Greg Mills is published by Hurst

‘The Long War: The Inside Story of America and Afghanistan Since 9/11’ by David Loyn is published by Saint-Martin press

‘Soldier in the Sand: A Personal History of the Modern Middle East’ by Lieutenant General Sir Simon Mayall, is published by Pen & Sword