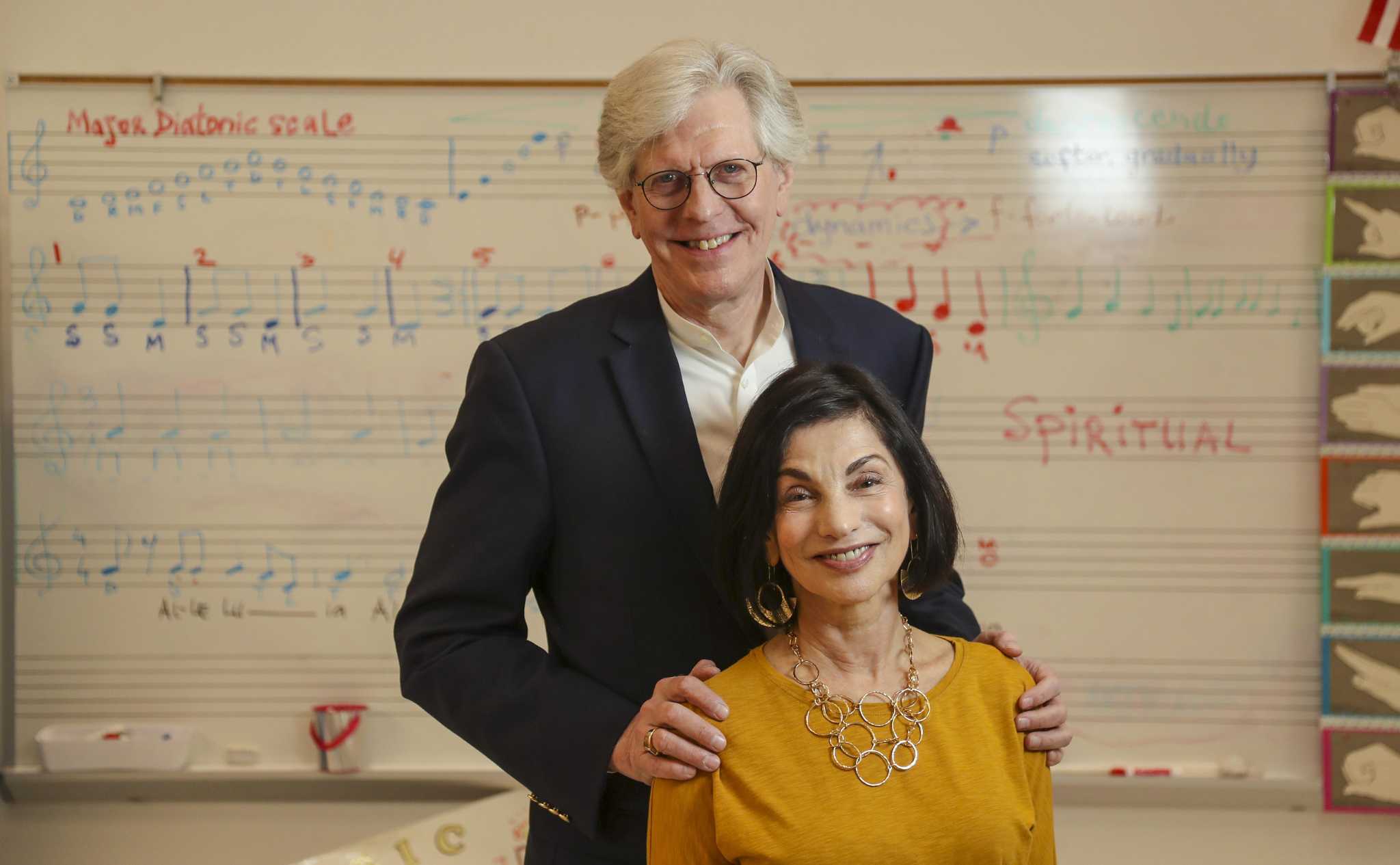 The Houston Chamber Choir, which he founded, celebrated its 25th anniversary. In January, the choir’s recording “Duruflé: Complete Choral Works” won a Grammy for Best Choral Performance. A few weeks later, the Houston Chamber Choir collaborated with the Treble Choir of Houston for two performances of “Circlesong” by British composer Bob Chilcott. The performances, and a subsequent recording of the piece, afforded Simpson, the choir’s artistic director, the rare opportunity to work with Marianna Parnas-Simpson, his wife of 25 years. Parnas-Simpson founded the Treble Choir in 2006.

A few weeks later, this magical year took a detour. With the rapid spread of COVID-19, simply gathering singers for rehearsals has become problematic. In March, Simpson said, “Everything just fell apart.”

Simpson exudes a warm energy, so he doesn’t dwell on two of the most difficult years in the existence of these choirs. Rather, he speaks gratefully of how they “managed to slip the needle between the Grammys and the pandemic.” The backing vocals poured their energy into Chilcott’s piece relentlessly.

Last week, a recording of their work arrived like an unearthed time capsule. British label Signum Records – which released the award-winning ‘Duruflé’ album – has released ‘Circlesong’, a beautiful and inspiring musical document.

The music acquired in two years an additional intensity, although involuntary. Chilcott was drawn to certain musical arrangements built around First Nations poetry. “I found it very connective, very energetic, and I loved the recurring connection to the idea of ​​the circle, first and foremost, as a symbol of unity,” he says.

Chilcott – a composer, bandleader and singer whose long credits include tenure and membership in the King’s Singers at King’s College, Cambridge – has delved into the poetry of the indigenous peoples of the United States – from tribes like the Chinook, Comanche, Dakota, Inuit, Navaho, Pueblo and others — and created 13 musical movements organized into seven parts. True to its title, “Circlesong” goes from the cradle to the grave, with time-stamped landmarks along the way: birth, youth, young adult, adulthood, middle age, and the inevitable denouement. But at this point, the title of the album invites the listener to start the cycle all over again.

Initially, Chilcott wrote “Circlesong” for two choirs in Birmingham in his native England. It was performed to acclaim but never recorded. Now, this recording is widely available and perhaps even more resonant, as the pandemic has certainly reduced the scale of the world and emphasized the connection theme of composition. In this case, the resonance of the piece also extends to its performers, including two directors who arrived at this musical piece from very different places. They lead two choirs that represent distinct phases of life.

Although she earned a master’s degree in choral conducting from the St. Petersburg Conservatory and conducted Kamerton, a city children’s choir, friends who had also immigrated encouraged Parnas-Simpson to give up her life’s work.

“My friends told me to find something else to do,” she says. “They told me that America didn’t need another conductor. It’s a hard job to find. So I was a single mother with good musical training and no English.

She followed the recommendations and studied radiology, with the intention of becoming an x-ray technician.

In Georgia, she met Simpson, then organist and choirmaster at Saint-Philippe Cathedral. At the time, Simpson wanted to start a professional choir, but points out that legendary music director and Atlanta Symphony Orchestra titular Robert Shaw was also its choirmaster. He was such a monumental figure that the choir bore his name: The Robert Shaw Chorale.

“It wasn’t really an ideal situation for another person to come in and settle in,” Simpson says. “The proverbial acorn under the spreading oak.”

So Simpson and Parnas-Simpson moved to Houston, where Simpson thought of starting a professional choir. He spoke to singers who had worked with the Concert Chorale of Houston in the 80s.

“As you might expect,” he says, “there were two answers. Un: I tried, and it didn’t work. Two: We miss him, please bring him back. So I chose the second.

Simpson founded the Houston Chamber Choir in 1995 and under his leadership the ensemble quickly established an excellent reputation among professional choirs. Parnas-Simpson, meanwhile, felt increasingly comfortable with her English and decided to return to her old job. She accepted a job as a choir teacher at Parker Elementary School in southwest Houston.

“It’s always been about the love of music and the love of children for me,” she says. “I never wanted to be a star or on an international record. If I had had a grand thought, I would have chosen the wrong profession. What I wanted was to learn how to teach these children better and to share with them what they have inside.

She founded Treble Choir of Houston – Christ Church Cathedral Girls’ Choir – in 2006 to expand her teaching beyond her work at Parker. The Treble Choir includes young singers in grades 6 through 12.

“I was just a teacher who wanted to share more of the beauty of the world with them,” she says.

The nature of a choir involves a certain degree of turnover. But churn for Simpson and the Houston Chamber Choir is slower than for Parnas-Simpson and the Treble Choir. She sees her young singers go through childhood, how they move on. The process is aligned with the arc drawn in “Circlesong”.

“The poems on which the music is based are timeless,” she says. “These are ancient texts written by Aborigines. It is as if they know certain truths of life. So, yeah, you think things are fleeting. This sadness of making beauty that you can’t hold on to, and then it’s gone. So it was a good idea to use children for the play. But they are also so wise. The grasp of this idea that everything must pass.

Recording is “something out of the ordinary”

“There’s a wonderful passage in the play,” Simpson says. “‘I seek strength not to be greater than my brother, but to defeat the enemy within myself.'”

In 2018, Chilcott was in Houston for a children’s choir convention hosted by Parnas-Simpson. She served as a driver in the city, and the composer told the director about the play. “Before he left to go back to England,” Simpson says, “we had agreed that he could come back and we would record him in Houston.”

Chilcott says, “For me, I couldn’t have asked two better bands to play and record this piece. I knew the Houston Chamber Choir well. I knew and loved their sound, and I knew that under Bob Simpson, everything they did was world class.

He had heard the Houston Treble Choir, but “I wasn’t ready to find out how wonderful they were when I came to Houston…These young singers are exceptional, and when we hear the recording, we have to remember that it’s a group of really capable teenagers.

The Parnas-Simpson singers juggled schoolwork with rehearsals that often lasted until 10 p.m. The recording required the children to do 140 takes. “They could have dropped like flies,” Parnas-Simpson says. “But nobody gave up. They could feel that they were doing something important. Something out of the ordinary. »

Both directors cite a moment that clearly left a lasting impression. At the end of each rehearsal and recording session, they addressed both choirs with some thoughts on how the next day would go. Leah Ellis, one of the Parnas-Simpson seniors, asked to speak.

“She turned to everyone, to the girls, and said, ‘I feel so blessed to be a part of this. I will carry this throughout my life: to be part of this group and sing this incredible music with this incredible choir. It’s a highlight of my life. And the girls were all on the floor, exhausted. And they all smiled. They went to school the next morning and came back the next evening, eyes sparkling and ready to go.

“Art, it can give you tremendous power and strength.”

Parnas-Simpson says the last two years have been a special struggle because his proteges are so young and their parents want to protect them. But she remembers the magic when they rehearsed in person.

One of his youngest singers – 12 at the time – was Ella Theurer, whom Parnas-Simpson describes as “a private, reserved, serious girl. And very talented.

“At one point when we were done, she approached Bob and looked him in the eye. She said, ‘You changed my life.’ And then she turned and walked away.