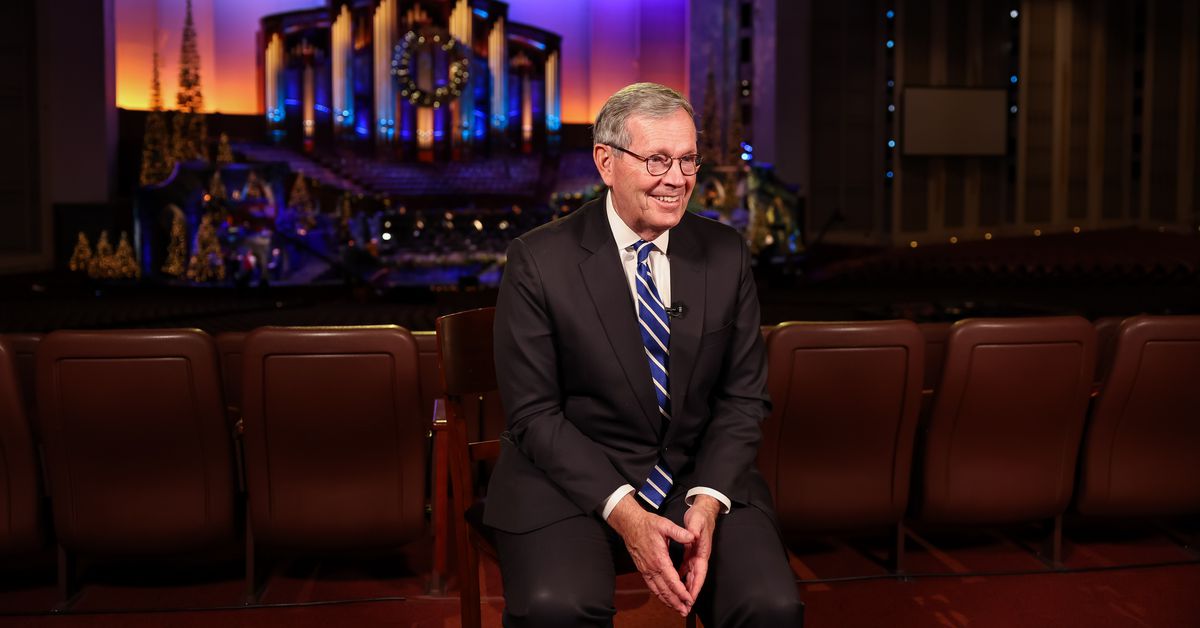 This year, with the world still grappling with the COVID-19 pandemic, the choir first had to demonstrate their ability to perform and rehearse safely.

Choir members began to prove they could do it in September, when they resumed rehearsals, in general conference, and on live broadcasts, although some choir members subsequently followed suit. tested positive for COVID-19. The decision was made shortly after general conference in early October to go ahead with plans to record a live Christmas concert with only a small audience on three evenings in December – Thursday, Friday, and Saturday.

That left two months to prepare.

Take it out, they did it. The recorded sessions will be used to create a TV special “Christmas With the Tabernacle Choir”, which features guest artists Megan Hilty and Neal McDonough, for PBS and BYUtv in 2022.

Hours before the recording of the concert on Friday night, there was a weary expression of satisfaction on the face of Mike Leavitt, president of the Tabernacle Choir in Temple Square.

“It was a demanding process, but we did it, and I think we did well,” he said.

Leavitt, Hilty, McDonough and Mack Wilberg, the choir’s musical director, were all on site Friday afternoon to discuss the concert with reporters ahead of the evening performance. Leavitt and Wilberg provided a glimpse into the backstory of the concert while Hilty and McDonough expressed their enthusiasm for the opportunity to be involved.

The choir was “delighted” to hear of the return of the Christmas concert.

“It’s not just part of their tradition, but it’s part of the gift we give to the community and the world,” said Leavitt. “There is something special about being able to bring a sense of oneness, a sense of peace and healing at Christmas. The choir has a broad mission, but it is well illustrated at Christmas. “

But safety was the No.1 concern, Wilberg said.

Even with what Leavitt dubbed the Swiss Cheese Plan in place, a tiered strategy developed for protection as the choir returned to rehearsals, there were members who contracted COVID-19, he said. .

“I use the term safely, but it should be noted that it has not been without risk or encounters with COVID,” Leavitt said. “Over the past three months we have had many choir members who contracted (COVID-19) and tested positive, but to our knowledge, have not had a single transmission inside the loft . “

The choir took part in a scientific study to track, trace and determine how the virus was transmitted from person to person.

“Once we’ve demonstrated safety at every level, we’ve taken it another step,” said Leavitt. “So after general conference it was concluded that we could do it safely – if we were obedient and had the blessings of heaven. Both were important. And the decision has been made, we’re going to go ahead with the Christmas concert.

Show for 4,000 in the conference center

Each evening, The Tabernacle Choir, Orchestra, and Bells at Temple Square performs before a relatively small audience of masked and socially distant people, mostly made up of families of choir members and some leaders of the Church of Jesus Christ of the last days. Saints. Leavitt said there were less than 4,000 in the 21,000-seat conference center each night.

Choir administrators studied components such as the ventilation system to determine how many people could be safely admitted to the conference center.

“We did a lot of modeling to determine how much risk was reduced by a whole series of actions,” Leavitt said. “How much risk has been reduced by hiding from the public?” What has been reduced by socially distancing them? What was the difference in risk if everyone was vaccinated? That’s the kind of thing that went into modeling, and modeling said if we followed this protocol, we could produce a safe result. “

With security ensured, the next concern was to find guest artists.

“Fortunately, this happened very quickly, compared to other years,” Wilberg said. “Once we secured our guest artists, we knew where we were going. … We didn’t know they brought a little bit of commonality in their background, so we decided to capitalize on that, which is their Irish ancestry.

Hilty – fresh out of her appearance earlier this month on NBC’s musical special “Annie Live!” – is well known for her portrayal of Ivy Lynn in the NBC musical drama “Smash” and has appeared on CBS’s “The Good Wife” and “The Good Fight” shows. Her Broadway credits include Glinda the Good Witch in “Wicked”, Doralee Rhodes in “9 to 5: The Musical” and Brooke Ashton in “Noises Off”.

She was “thrilled” to receive an invitation to perform with the choir and be part of the Christmas concert. There was no hesitation on his part.

“Let’s just say I erased everything so I could be here,” Hilty said.

“There is something to stand in this sea of ​​magnificent voices that are so beautifully formed to sing together in unison. I have a bit of a hard time articulating it because it’s a feeling more than anything, and it’s incredibly powerful to stand so close to all that talent and all of that great musicianship and then sing along with them. It’s really an experience that I can’t quite describe, but it’s so decadent.

McDonough, an award-winning actor, has appeared in over 100 films, including “Captain America” ​​and “Forever Strong”. He played Lieutenant Compton in the WWII miniseries “Band of Brothers” and Sean Cahill in the “Suits” television series. He’s a devout Catholic who was once fired from a network show for refusing to do sex scenes.

McDonough said he had to shoot a western in Tucson, Arizona, but because of COVID-19, plans changed, leaving his December schedule wide open.

“I’m pretty sure it was divine intervention,” he said. “But I couldn’t be happier. I was so busy until about a week ago … and then I quit. Then I was able to mentally prepare myself to be the narrator of this incredible show. It is truly remarkable. It’s a blessing over blessings.

McDonough said he was honored to be the narrator for the concert and impressed with how quickly it went. He is also honored to work with members of the Latter-day Saint faith, whose heritage reminds him of his own Irish roots.

“To be able to be the narrator that connects the Catholic faith and the Mormon faith and make us realize that we are all here as children of God… to celebrate that is a pretty awesome feeling,” he said. . “This is all of God’s work and tonight he made me the narrator of the most incredible show I have ever been on.”

Sacrifice and greater appreciation for being together

Leavitt and Wilberg both came out of the experience of preparing for the Christmas concert with a greater appreciation for the sacrifice of the choir members and the opportunity to be together.

Leavitt said the choir members stayed late for a rehearsal last week and traveled home long distances in snowy conditions, then returned the next day.

“To understand how much the choir members sacrifice,” he said. “This is perhaps the most important realization that I have is how much they sacrifice, and how much goes into preparing for this pretty amazing production. It’s world quality.

Wilberg has been a part of the annual Christmas concert since 1999, but says this year is different.

“What sets me apart is just a greater appreciation of being able to be together,” he said. “Before COVID, we took a lot of things for granted. I think we’ve all learned some great lessons through it all. For this special occasion, we’re just so excited to be able to be together, make music again, and share what we’re doing with so many people.