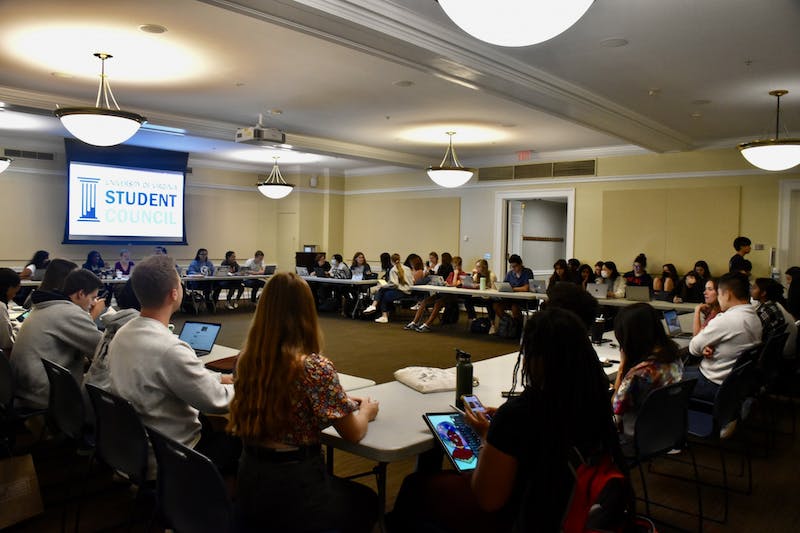 Student Council heard a presentation from Jaden Evans, Vice President for Administration and a fourth-year student at the College, regarding a proposed student activity fee increase on Tuesday evening for public comment.

All students currently pay $50 per year for this fee, which is used to financially support student organizations. Active CIOs and Special Status Organizations can apply for SAF funding for expenses incurred during the school year or the previous school year, including food, office supplies, guest speakers and more.

For fiscal year 2023, the student council will receive an anticipated $1.8 million in funding requests from CIOs. This number is based on allocations during the 2021-22 school year, when the student council received $2.1 million in funding requests, of which $1.75 million were eligible for SAF funding. Of this amount, the Student Council allocated $1.07 million in SAF funding and a total of $863,740 was spent by CIOs.

Evans identified two central justifications for proposing this increase – the impact of inflation on the true value of the fees and the gap between the IOC’s funding requests and the funds the Student Council can provide.

“[Between] what was asked for and what we were able to meet, that gap has reached a million dollars in some years,” Evans said. “It shows a very clear demand from student organizations that they want more funding than we are in able to provide with the current revenue stream from the current royalty level. »

Evans and Ceci Cain, student council president and graduate student, said the increased fees would require a higher financial contribution from students. However, the pair see an increase in funds as moderate and pointed out that SAF is one of the fees that accrues directly to students.

“This is a fairly modest fee increase, and it’s also one that goes directly to students,” Cain said. “We actually hope to use this fee to be able to provide the infrastructure and resources that low-income students, in particular, need to be able to stay at this university, so we see this as something that will have a net positive impact on all types of students at the University.

The Board of Visitors will make the final decision on whether or not to increase fees, but Cain and his administration will work with the Student Activities Committee to create a proposal to present to the Tuition and Fees Subcommittee. The sub-committee will then make a presentation to the board at the December 4 meeting.

The student council will have a comment box open on its website September 28 to October 5 for students who have feedback regarding the proposed fee increase. The representative body will consider the proposal at a special meeting shortly.

The representative body also passed a bill to appoint third-year student Christian Ephriam as director of coalition engagement after Ephriam. address concerns he had not encountered individually with members of the Jewish community.