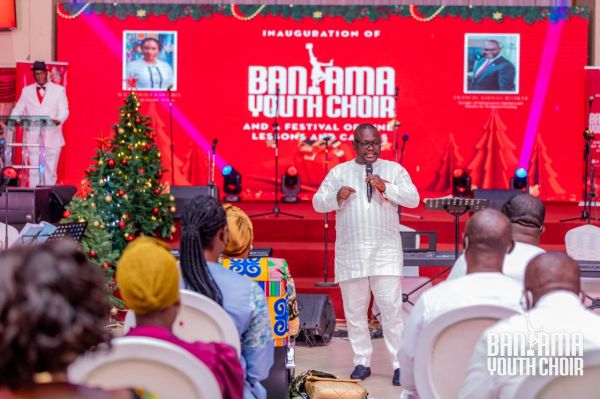 “As a member of the Methodist Church, I have always enjoyed watching the choirs sing, especially when the choristers are walking in the chapel.

As I continued to enjoy this from my childhood, I tried to be a part of the choir, but one day the choirmaster told me not to come back to rehearse because my voice was not good for singing. I knew I didn’t have a good voice, so I succumbed to his instructions.

However, being outside the choir didn’t kill my interest in choral music – I have always supported backing singers wherever I am.

So my creation of the Banatama Youth Choir stems from my love for choral music and my determination to engage the youth of Bantama constituency in worthwhile activities ”.

These were the words of the Minister of Public Works and Housing and Member of Parliament for Bantama Constituency, the Hon. Francis Asenso-Boakye on Saturday December 11, 2021 at the A. T Nartey Assembly of the Church of Pentecost, Bantama, during a colorful inauguration of the Bantama Youth Choir and a festival of nine lessons and songs.

The Minister and Member of Parliament who is the founder and president of the Bantama Youth Choir during his speech at the inauguration and the festival of the nine lessons and songs indicated that he believed that the good training he had received in Sunday School and the Methodist Church Boys Brigade as a child and youth, helped shape his life better for the challenges and responsibilities of his career and his entire life today. hui, hence the founding of the Bantama Youth Choir to transform the singing talents of young people into skills and train them to be resourceful in order to be able to contribute to national development, as well as to defend strong Christian values ​​among young people.

Mr. Asenso-Boakye indicated that he wanted to build his choir to become a dynamic and internationally recognized vocal group that will perform on global stages as do the Sowetho Choir and the Winneba Youth Choir.

A stunning performance by British Ghanaian singer, actress, producer and entrepreneur Dentaa Amoateng made them feel like they were listening to an opera singer at the Beacon Theater in New York City.