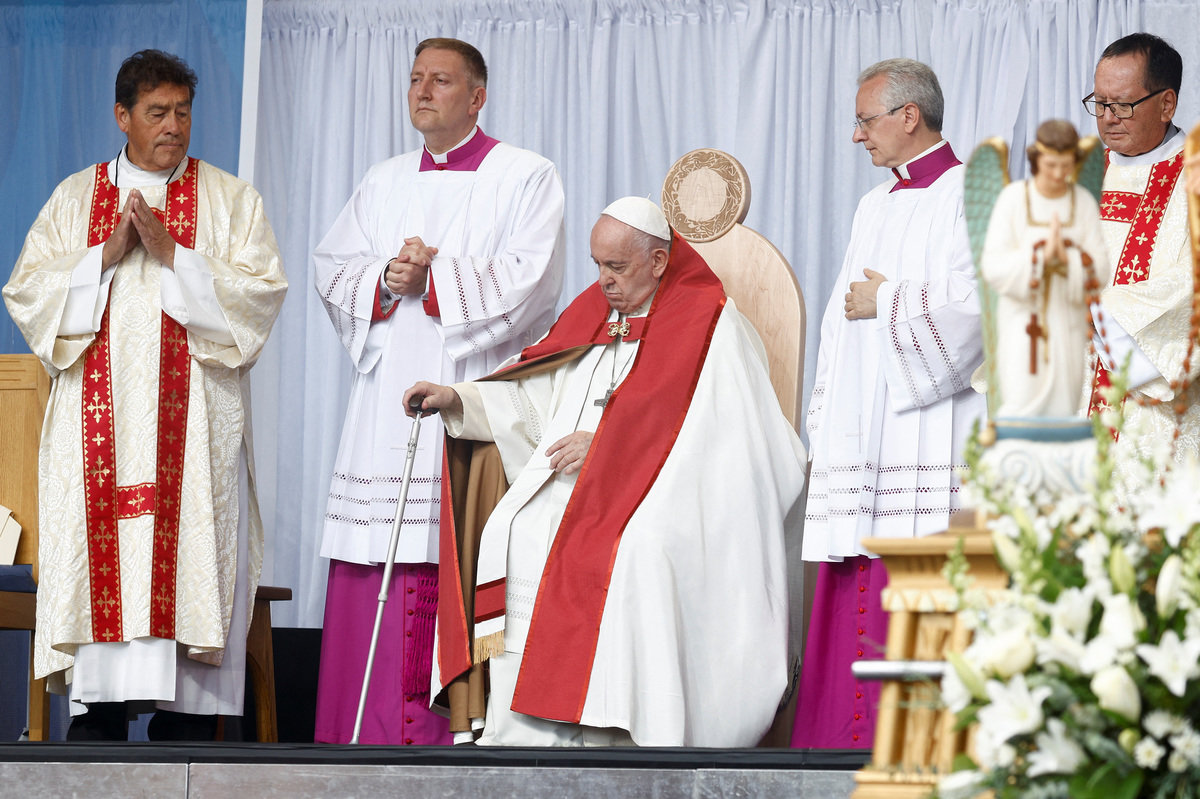 Russia’s Vladimir Putin may do well to follow the example of Pope Francis and his penitential pilgrimage to Indigenous Canada in apologizing and seeking forgiveness and reconciliation from the Ukrainian people for his massacre of innocent Ukrainians.

After reading the speech that Pope Francis gave at the start of his penitential trip to Canada, I wondered how we, Catholics in our parishes, together with our priests, can increase our understanding of what happened and move forward together towards a better future.

The priests are already overloaded, but we parishioners cannot exclude ourselves from the possibility of a healing journey.

Could we have groups over the next few months where this great talk will be read in small or large groups in each parish? We have mature parishioners in every parish who could function as leaders.

I was renewed in my faith and work by Pope Francis’ penitential pilgrimage to Canada. The places were superb and well chosen.

Thank you for his gift to Canadians and to Indigenous brothers and sisters. I have in my heart to do more in what God gives us to do.

A photo caption in the Aug. 1 BC Catholic said, “Si Pih Ko, also known by her English name Trina Francis, gets emotional as she sings Canada’s national anthem in the Cree language during a visit by Pope Francis to Maskwacis, Alberta. ”

This was not the true meaning of Si Pih Ko’s song lyrics or his Cree statement. The emotion expressed when she sang made me cry. I don’t speak Cree, so my curiosity led me to search for news about the true meaning of his song and speech over the next few days. CBC reported that she sang in Cree to the tune of Canada’s national anthem and that the lyrics of the song were an ancient ballad to land and village and the message was a rebuke to the pope and the Church.

As Catholics, we are obligated to tell the truth, even if it is not flattering.

The BC Catholic has extensively covered the papal visit to Canada, intentions, speeches, homilies and excursions. What was not included in the Pope’s visit, such as a natural recognition of the history of all the missionaries and martyrs of Canada, could not be covered. They were sacrificed in the current view that all were guilty of colonialism.

The fact that many Catholic churches were burned down with little public protest and regret months ago could have received papal acknowledgment of their misguided destruction.

Apologies given and accepted are healthy and humiliating. Nevertheless, this visit left many with the impression that the pope was apologizing that the Catholic faith itself was not integrating quickly enough into the global secular world.

Following the Pope’s visit, I follow up on an earlier letter regarding the construction of a new church in Whistler.

The Pope is gone, but as a Catholic and a Canadian, the deep meaning of our 86-year-old leader’s visit remains. I was moved by the images of great fatigue and deep suffering for which he was perhaps not prepared. I am convinced that the raw intensity of the personal and direct narratives exceeded the depth of his heart.

His departure and his words, like the erasing of names and marks from the bare earth in the recent past, remain with us. The times and human expression of condemnation, and the offering of heartfelt apologies, have been fulfilled, but the odious and uncomfortable legacy remains.

What will happen now?

The image of the pope in a wheelchair evokes the image of Jesus entering Jerusalem on a donkey. The sign of humility, the humanity of the gesture and the request for forgiveness is with us; the die is cast.

It is now the turn of the Canadian Catholic communities and the Catholics of Whistler. It’s a chance to start a new relationship with the indigenous peoples and to restore their dignity to the innocent souls lost in the history before us.

The logic of numbers, big expenses and ostentation must give way to the logic of love and fraternal mutual aid.

This is a powerful reason to stop and rethink if building the new church is the new message to give.

In 1968, the “Winnipeg Declaration” opposed the teaching authority of the Church by Humanae Vitae leaving to the conscience of the individual the opportunity to use artificial contraception. With this, the floodgates of sexual deviation and abortion were opened.

Over the following decades, this “freedom of conscience” was quietly extended to pro-abortion officials who received Holy Communion from popes, bishops, and priests, and even received state funerals in cathedrals. Pope Francis’ recent statement about leaving it up to President Biden’s conscience to receive Holy Communion is just a flippant endorsement of how things have been handled so far over the past few decades. .

But abortion is murder. If you commit it or cooperate in any way, you are excommunicated. It is not a matter of conscience but of opposing the commandments of God, written in every human heart!

There has been a rapid descent from abortion to “passive” euthanasia by withholding food and water from active euthanasia patients in “Medical Aid in Dying”, to now include the mentally ill and people suffering from poverty.

And over the past two years, we have seen an all-out attack on the world’s population with gene serum tainted by compulsory abortion. The Church has become the slave of the government, playing the game, promoting and imposing these injections, driving out of the Church those who disagree.

What is happening cannot be excused by “freedom of conscience”.

Pride, mother of sins, is the first of the seven deadly sins. It was out of pride that Lucifer and his followers were ejected from heaven and cast down to earth, where they plotted the destruction of mankind and of the Catholic Church which Jesus Christ founded on Saint Peter.

Jesus promised that he would be with her until the end of time and that the gates of hell would not prevail against his Church. He must have known the trials and tribulations she would endure throughout her history, where there have been and still are those who seek her quick death, in union with that serpent of old and the great deceiver.

We were informed by the medical authorities of monkeypox. It spreads quickly through close contact with an infected person. In the majority of cases, it has spread through homosexual contact. No amount of “fun” pride parades will stop its spread.

This is where a rampant and misunderstood Human Rights Act has led us. Can anyone say that society is better and safer than it was ten years ago? What was good before is now bad, and what was bad before is now good. So one wonders why this world is heading towards the abyss.

While researching a related question, an article on Nazi eugenics caught my eye because it shows how “MAiD” is just a rehearsal. At the time, some people were hanged for it.