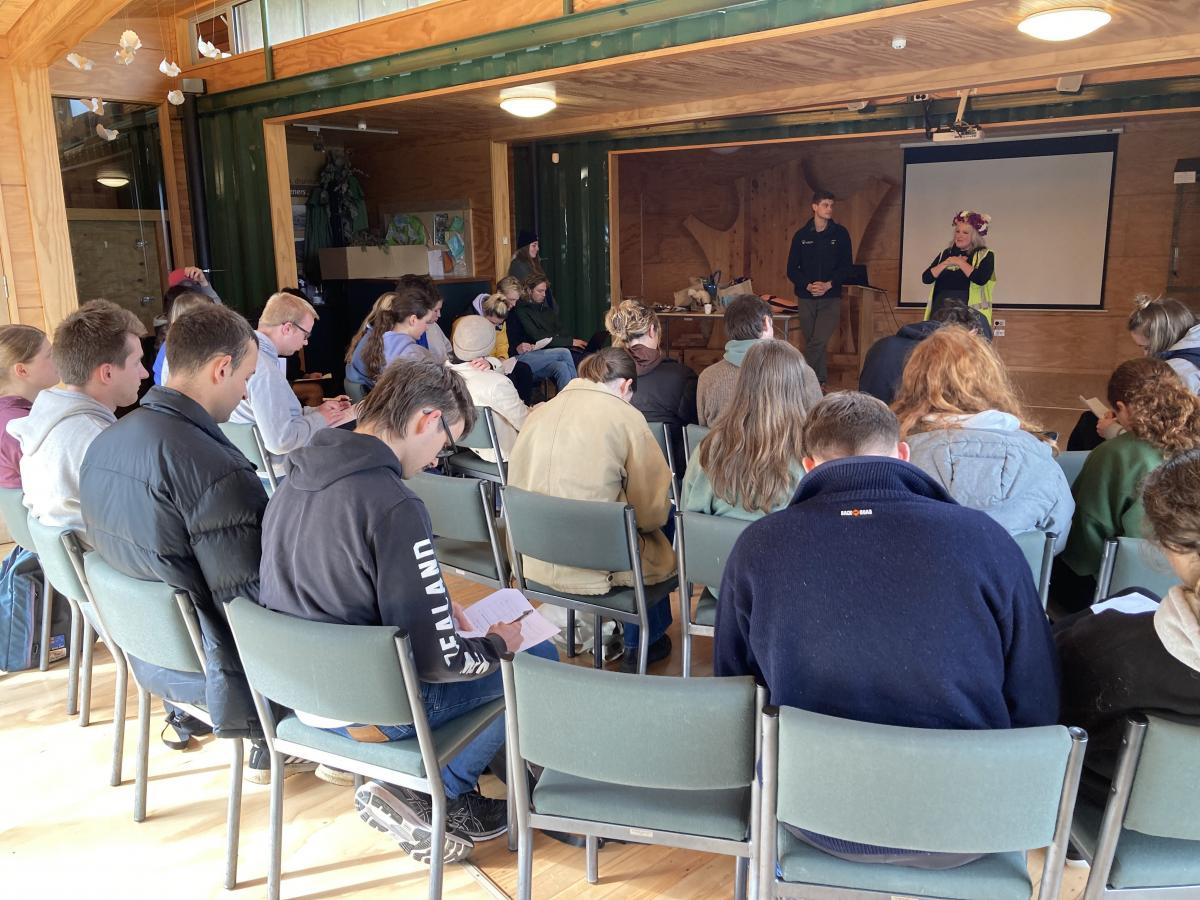 Shocked to learn that the education program at Orokonui has not received funding from the ministry for the next three-year period, Alyth Grant visited the eco-sanctuary to see how the program was doing.

The Orokonui Ecosanctuary is driven by three goals: conservation, restoration and education. There are only two paid employees left at Orokonui to cover all levels of the education program, from pre-school to post-secondary, Tahu Mackenzie and Taylor Davies-Colley. In the past, their LEOTC funding from the Department of Education meant they could also employ tertiary student assistants, which meant future work for students while studying. They learned from the Orokonui staff while sharing the load.

On the day of my visit, I joined a group of third-year geography students who, as part of their course, were listening to a presentation by Mackenzie and Davies-Colley, followed by an in-depth tour of the sanctuary. Nowadays, geography at the tertiary level includes a wide range of options going far beyond the understanding of physical geography: articles on ecology, societal challenges such as inequalities, the vision of sustainable cities, environmental planning and policy, resource management are all offered within the context of geography. The courses aim to combine practical skills with theoretical learning.

Visiting Orokonui is a field trip that contextualizes much of what they study. This context includes not only the multiple challenges of forest conservation and restoration, but also financial challenges. They were told that where the ecosanctuary covered 60% of its running costs from visitor revenue, after Covid this dropped dramatically to around 30% – a problem shared, of course, with other projects on wildlife. Foreign visitors have been absent, while the number, spending and confidence of local businesses and sponsors, inevitably, has also declined.

But the financial concerns are not just due to the pandemic, as difficult as the current situation is. It is a sad irony that the growing number of groups across New Zealand who have embraced the ambitious ‘predator free 2050’ target now find themselves competing for questionable funding that is not increasing to match the costs involved. , despite the largely voluntary contribution. of most projects.

Orokonui, open to the public since 2009, now has a considerable history. Initially, the gated model required explanation and justification to an uninitiated audience; now he is interacting with an ever more engaged and informed audience that is helping to extend the trapped area ‘halo’ around Dunedin to achieve the goal of a predator-free city.

Davies-Colley explained to the students the issues that arise from the interaction between the safe zone inside the fence and the environment beyond. Trapping outside is vital, as the fence is continually attacked by predators beyond that sense the large supply of food within. Yet despite all the careful monitoring, the fence has not always been inviolable. A few years ago, the stoat invasion led to the complete loss of the tieke/saddleback population. Other reintroduced birds such as kaka and doggie/robins, which fly well beyond the sanctuary, are not safe from predators, especially if they attempt to nest outside. Kaka have been victims of accidents in the human environment, such as power lines, water reservoirs, “nice” humans feeding them the wrong foods, and on occasion poisons in traps. to poorly designed opossums. Additionally, climate change, leading to potentially catastrophic rains and slides, as seen recently in Nelson, can threaten the fence itself and therefore the safety of the creatures within. Such dangers, present and future, are in themselves important reasons to involve the wider community.

After a tour of the shrine itself, the geography students were thrilled with what they had seen. Whether observing the amazing regeneration of the forest or encountering rare wildlife for the first time, visitors are generally delighted with the richness of their experience. This rather gray and sunless day kept the tuatara and skinks hidden under their rocky shelters; the takahe were also not visible, as they were sitting on eggs, a promise that has since been fulfilled – they managed to hatch two chicks, which will soon delight visitors this summer.

Yet, as Davies-Colley pointed out, the environmental success of the project cannot be judged solely by its achievements so far. The work is not done. Ultimately, success would be if Orokonui became surplus and the fence was no longer needed, as our wildlife would fly freely and safely all around us. The ecosanctuary would have been only a first step on the way to this objective.

After 14 years of facing challenges of all kinds, there is little room for a romantic idealization of the ecosanctuary’s goals or achievements. Yet the important goal of educating future generations continues. They must understand the dangers, the hopes and the work required to restore New Zealand to what it once was.

At the end of the visit, I asked some students about their career aspirations. Many of them surprised me: outdoor education, environmental law, mine restoration, freshwater resources, groundwater management and conservation, forest ranger, hydrological consultation, iwi law and conservation. Suddenly I understood much more clearly the potential impact of the third objective of the Orokonui Project – beyond conservation and restoration – environmental education.

As Davies-Colley said, even in these difficult financial circumstances, “not going to school is not an option.”