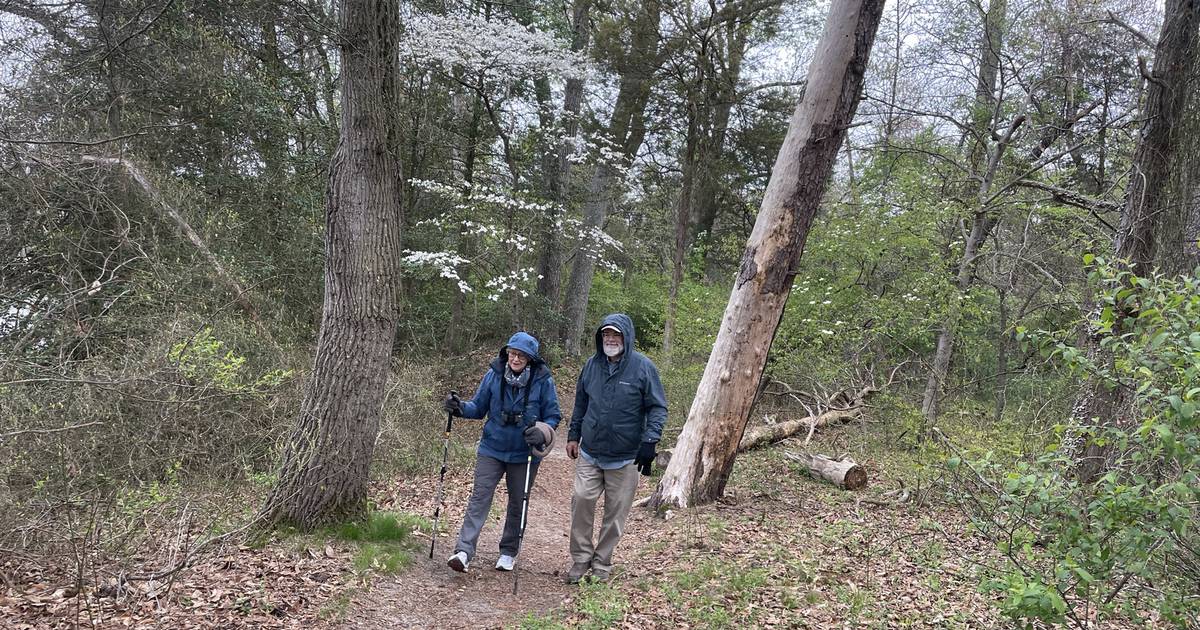 I write this at a picnic table under a canopy of my favorite mix of trees, if only for the poetically pleasing coincidence of their names – holly and loblollies. Oh, and there’s also a very tall red oak tree, its newly formed spring leaves springing up as the shriveled brown leaves of last fall peel away.

Louise and I are off on our maiden tour of the Delmarva Peninsula in our new teardrop-shaped little RV. Louise, of course, is my emotional support wife. For once, we left our rescue retriever, Millie, at her Annapolis home with a house sitter.

Our first stop was only an hour away. As we crossed the Chesapeake Bay Bridge, we spotted the gigantic freighter that had just lifted off the bottom of the bay. It stood out from the much smaller ships in the anchorage known as Annapolis Roads. Once on the east coast, we headed to Martinak State Park, just south of Denton, the county seat of Caroline County.

While driving through town, we came across a historical marker which I found remarkable. He said that Denton was originally called “Edenton”, after Sir Robert Eden, the last governor of Maryland before the Revolutionary War. Caroline County was named after his wife, Caroline Calvert, sister of Frederick, the last Lord Baltimore.

The local connection is that Eden left Annapolis for London in 1776 under duress. Even though he had become close friends with many of our Founding Fathers during his years in office, including George Washington, much of Eden’s property was confiscated upon his departure. He returned to Maryland after the end of hostilities by the Treaty of Paris, hoping to be compensated for the loss, but he died in 1784 at the age of 43 before this happened.

He was buried under the altar of the second Church of St. Margaret, which burned down in the early 1800s. The location of his grave fell into obscurity until an archaeological expedition discovered his lost bones for a long time in 1924.

Eden was reinterred in a prominent position in St. Anne’s Cemetery in Annapolis. Its richly carved tombstone is worth a visit. It’s just to the left of the front of the church.

Martinak State Park is just south of Denton, between the banks of the Choptank River and Watts Creek. We had been there a thousand times on the way down to the ocean, so I was curious to see what we had missed. Louise and I were pleasantly surprised. It’s one of the smallest parks in Maryland with about 125 acres of pine and hardwood forests, fields, and marshes, but there’s plenty to explore.

George Martinak deeded the property to the state in 1961 and it became a park in 1967, just two years before his death. He was a World War I veteran who worked at the Government Publishing Office in Washington. As an avid camper and fisherman, Martinak bought 10 acres near the junction of Watts Creek and the Choptank River in 1928 and built a log cabin there as a base camp. During the Great Depression he purchased the surrounding property until his “camp” totaled 99 acres of sandy pine woods on high ground along the river and creek.

The log cabin he built on a bluff overlooking the river has been restored and moved to a more central location in the park, which includes hiking trails, several attractive playgrounds, picnic pavilions, a nature center and an amphitheater overlooking the creek. Pets are allowed in all areas of the park except pavilions and cabins.

After arriving at the park, Louise and I hiked through the rain on a trail that skirted the cliff at the edge of Watts Creek. It was low tide and the mudflats on either side were strewn with shoots of marsh grasses and reeds emerging from their winter hibernation. We admired the newly blooming dogwood trees. We peeked out the window of the old log cabin and imagined Martinak and his pals telling fish stories around the fireplace.

We discovered an exhibit of the remains of an ancient pungy, a type of schooner that had been unearthed from the mud of the creek in the 1960s. You can see by the massive, roughly hewn keel and many ribs how old the shipwrights used hand tools to shape logs into the shape of the hull at a time when timber was plentiful but sawmills were scarce. The Lady Maryland is a breeding pungy that leaves Baltimore with the Living Classrooms Foundation.

The next morning was clear but cool, the perfect weather for a walk in the woods. We took part in a guided walk for seniors led by volunteer park naturalist Karen Gianninoto and her husband Tony. The couple live near Preston. Karen retired from teaching English as a Second Language and then went through rigorous training to become a Certified Master Naturalist at the University of Maryland Extension. She leads nature programs in Martinak as well as Tuckahoe State Park and Wye Island.

“It’s my perfect retirement job,” Karen told us with a smile. Her role, she explained, is supported by the Healthy Parks, Healthy People program designed to encourage physical activity in parks across Caroline County and western Maryland. County staff are encouraging health care providers to give their patients a “prescription” to walk in the woods, both for physical exercise and peace of mind.

We were joined by a few regular walkers, Denton residents Cindy Towers and Carol Ann Mitchell, who have obviously been good friends for many years. As we walked along the flat, cobbled path that wound through the woods, we chatted and it turns out that Cindy grew up in Edgewater and often visited her grandparents who lived on West Street across from Annapolis Library. She was a graduate of the former Annapolis High School, now Maryland Hall for the Creative Arts, where Louise served as volunteer coordinator for several years before retiring. It’s a small world, we concluded, and that tends to keep you on your best behavior.

Karen was generous with her knowledge of the park’s flora and fauna, and I asked her for help identifying various evergreens we saw on our walk.

“I like to think of it that way,” she said as she picked up a cluster of needles on the trail. Pine needles grow in clusters called fascicles, she explained. You can tell pine trees apart by the number of needles growing in each cluster.

“Loblolly has three syllables,” she said, “and her needles come in threes.” She pointed to one of the many tall, straight trees with scaly bark. “They carve themselves, so the lower limbs fall off as they grow. There are five letters in [the word] white, and the white pine has five needles.

She held a booklet with only two needles.

“This is from a Virginia pine,” she said, “and the needles form the letter ‘V’.”

Now I know. We walked less than two miles around the park in about an hour and I learned things about the pines that I will use for the rest of my life. We also made new friends. It was a great way to celebrate Earth Day, even if it was a bit early.

Our piece of land here in Maryland has a lot to celebrate and a lot to explore. Now that I’m done writing this column, sitting here under the trees, I can’t see my laptop screen through all that pollen. But at least now I know what trees I’m sitting under.