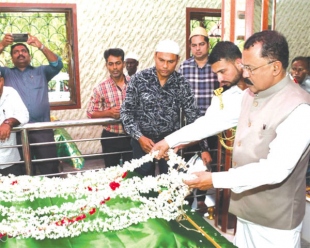 Goa government is in the process of legally resuming mining activities: Governor

QUEPEM: Assuring that the state government is in the process of legally restarting the mining activities, Goa Governor PS Pillai said the Raj Bhavan will also pursue the matter. “The Supreme Court judgment on mining is the law of the land, but Goa government is making the necessary efforts to resume mining, legally,” he told Sharda English High School media. , Sanvordem, which he visited on his tour of Quepem and Curchorem on Saturday, as part of his Sampurna Goa Yatra.

As he interacted with panchayat members from different villages in the region, Pillai remarked that Goa was the richest state in India, based on per capita income, and said he was always important to create an autonomous Goa. “The panchas are the representatives of the people at the ground level, who should try to understand the aspirations, demands and pulse of the people, and strive to be successful representatives of the people,” Pillai said. He reminded government employees present at the rally that they had a duty to serve the people. “Whether you are Minister, Deputy Collector, Mamlatdar, BDO, Sarpanch, Councilor or Governor, we have been appointed to collectively serve the people and solve their problems; only then will there be progress in rural areas,” the governor said.

Speaking about a cause close to his heart, Pillai said Raj Bhavan would form an expert committee to investigate why a large number of end-stage renal disease patients, who require dialysis, are from the Canacona areas. and Fatorpa. It also distributed financial aid to 18 dialysis patients. Accompanied by his wife Reeta Pillai, the Governor also visited Saptkoteshwar and Shree Shantadurga Fatarpekarin temples in Fatorpa, Babulshaha Pir Aulia Dargah and Mahadev temple in Cacora and the Church of the Guardian Angel in Curchorem, where he interacted with the religious leaders in each place of worship.